A new survey of eight Middle East countries finds consensus on two issues — that Daesh (ISIS) is the major threat, and that the US’ role in countering it is “extremely negative” in the region. The survey was conducted by Zogby Research Services, (Zogby). They conducted face-to-face surveys with 7,400 adults in six Arab states, plus Turkey and Iran, in September. (This was prior to the terror attacks in France and San Bernardino.) Interestingly, the poll found considerable agreement about the causes for Islamic extremism, with majorities blaming:

Groups promoting extremism: Respondents in all eight countries were asked about four groups: Daesh (ISIS), the Muslim Brotherhood, al Qaeda, and militias and groups supported by the Iranian Revolutionary Guard. They were asked to rate how serious a problem each of these groups is on a scale of 1 to 5, where 1 is “a serious problem” and 5 is “no problem at all.” The table below shows the percentages of respondents who selected 1 or 2 (“problem”) and 4 or 5 (“not a problem”) for each group, as well as a ranking of how problematic the four groups are from the perspective of respondents in each of the eight countries. 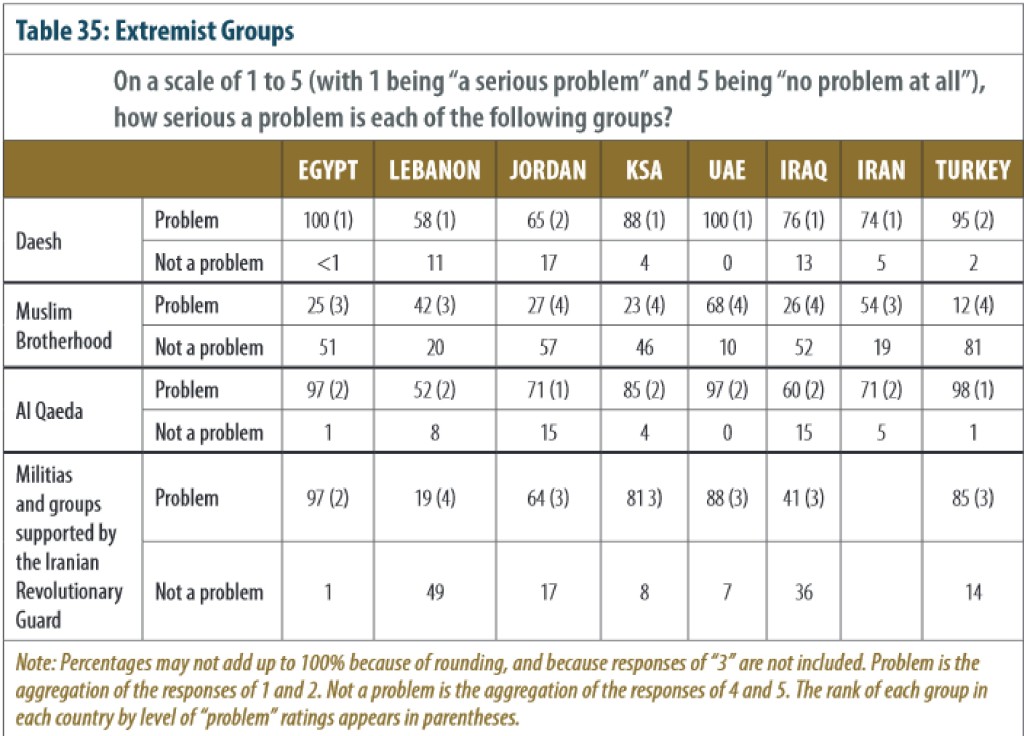 How best to defeat extremism? Respondents in every country said:

Changing the political and social realities that cause young people to be attracted to extremist ideas [followed by] countering the messages and ideas of extremist groups.

Countries combating extremism: When asked which countries were effective at combating sectarian violence, the US was ranked worst by all eight countries while Iran was ranked second-worst, with six countries rating them poorly: 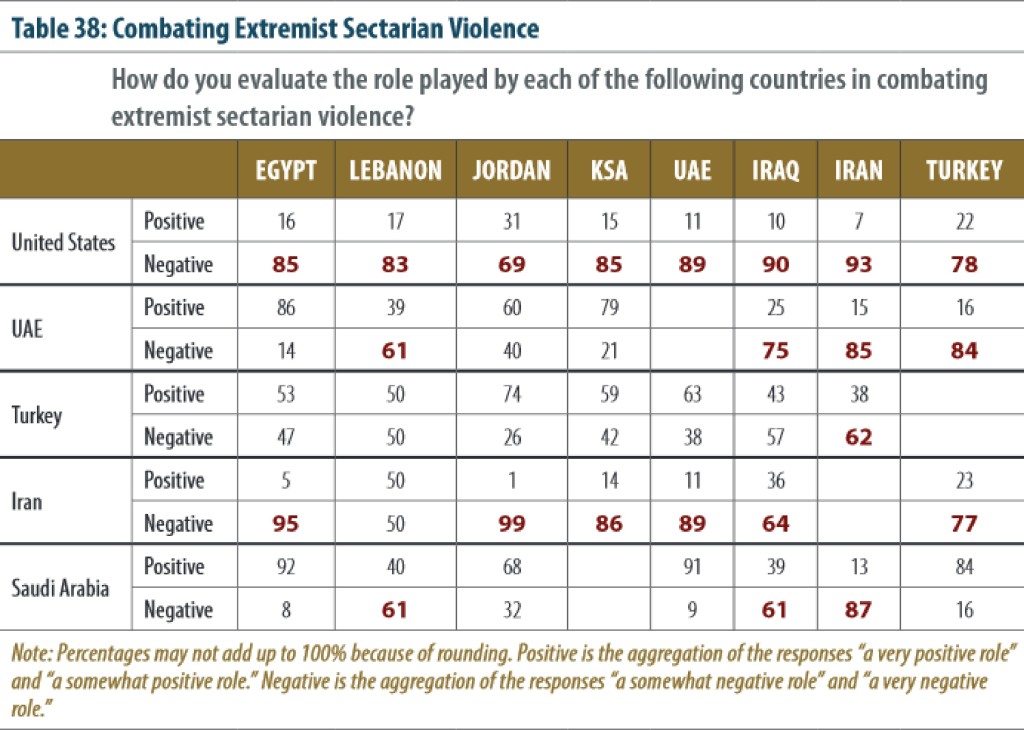 • Surprisingly to people in the US, Turkey gets the most consistently positive reviews for its role in combating extremist sectarian violence, including majorities in Jordan (74%), UAE (63%), Saudi Arabia (59%), and Egypt (53%).
• Saudi Arabia and the UAE are viewed positively by wide margins in some countries. Saudi Arabia’s top ratings come from Egypt (92%), UAE (91%), and Turkey (84%), and a majority in Jordan (68%). The UAE’s top ratings come from Egypt (86%), Saudi Arabia (79%), and Jordan (60%), while 39% of Lebanese and fewer than one-quarter of respondents in Iraq (25%), Turkey (16%), and Iran (15%) see the UAE as playing a positive role in combating extremist sectarian violence.
• In Jordan, 31% of respondents view the US’ role as positive.
• With respect to Iran, Lebanese opinion is evenly split between positive and negative. In Iraq, 36% view Iran’s role as positive, while less than one-quarter of respondents in the other countries surveyed agreed.

Perhaps these results support what most people in the US think:

• ISIS is a big problem and,
• Nobody wants us to solve it.

But, we keep trying to solve it, so the real question for Americans is: “What is in it for us to fight ISIS?”

If you watched the Republican debate in Las Vegas, you saw nine GOP candidates, all of whom avoided military service, bluster about how tough they’ll be on ISIS, using the kids of other Americans as fodder.

What is amazing is, all of these open-carry advocates talk about provoking, disrespecting and punching a guy (Putin) who openly carries an arsenal of nuclear weapons.

And we would provoke him why? Because ISIS is a huge threat to us? Or, because Putin wants to keep Syria’s Assad in power? Or, because it polls well with the fringe of very conservative Republicans who know nothing about military tactics?

Or, is it because the countries in the region really, really want us there?

Zogby (and the people they polled) say, “Not so much.”