Nobody knows. Maybe. The “a miracle can happen” argument was made by Bob Lefsetz, who all of you should bookmark and read:

…in 1964, Elvis was king. And then the Beatles wiped him off the map. We had a decade of rock and roll. It had been whittled down to a formula…And then…A band with roots who didn’t believe in convention, who’d honed their sound off the radar, delivered an honest wallop that was undeniable. And overnight the youth switched allegiance.

Could happen again. Probably will if Bernie Sanders is any indicator.

First, he has to get the nomination. Even after winning 60% of the NH vote, Bernie has barely dented Clinton’s lead, which thanks to super delegates, currently stands at 394-42. The super delegates are lining up for Clinton, and what happens if Sanders can’t beat a massively powerful political machine? It proves his fundamental point about establishment hegemony. And if Clinton can’t beat an old leftie from Vermont on his first national run? It disproves her arguments about electability, experience and competence.

But it takes 2,382 delegates to win the Democratic nomination for president. Check out Bernie’s difficult path in the upcoming primaries: 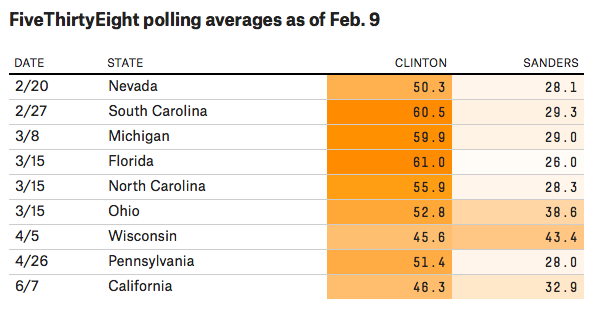 It won’t be easy for Bernie to win the nomination. And he has built-in disadvantages: He angers the big donors. He has limited support in the Democratic Congress. There are no governors supporting him. Add that a lot of Democrats are skittish about Sanders’ embrace of “democratic socialism,” and add his Dovish positions on foreign policy, and you’re not likely to see a stampede of Democratic insiders rallying to his cause.

OTOH, Hillary had all the insider support imaginable and couldn’t win in NH. And if she can’t beat a grumpy old socialist Jew without super delegates putting their collective thumbs on the scale, how the hell is she going to beat the Republican Media Complex fighting uphill against the Benghazi and E-mail scandals?

But, Sanders has a long, long way to go to maybe get within striking distance of the nomination. Even then, he will continue to be reviled by forces on the right that will pull no punches in order to defeat him. The Conventional Wisdom will always say that Sanders isn’t viable, electable, (a “socialist” can never win), is too old, can’t raise enough money, won’t get the votes of women, African American’s, Latino’s, etc.

And if he smashes any one “barrier,” the remaining “barriers” will be elevated in importance.

And new “barrier” constructs will be created.

Returning to the Lefsetz meme, what narrative could resurrect Hillary’s appeal to the young? “Experience” reinforces her establishment brand. “Pragmatism” runs counter to every progressive aspiration of the Sanders campaign. “Fights for people like you” invites an examination of Bill Clinton’s deregulation of Wall Street, and his welfare reforms, or his legal reforms which imprisoned many minorities.

Those who say “Hillary can work within the system and get things done where Bernie can’t” have to realize that is a double edged sword. Millennials are the largest single voting bloc this time. They think unemployment and jobs are the biggest issues. They think the system has screwed them. They want the system to be rebuilt from the ground up.

And it’s not too hard to figure out why.

They are saddled with debt, their economic opportunities are far more limited than that of any recent generation. They are told they are being selfish by the Boomer generation − the generation that while achieving many great things, has left a huge economic and geopolitical mess to deal with.

So, can Bernie win? Who knows?