Now that both presidential conventions are history, the real discussion about the merits of the candidates and their programs begins. The first question to answer is: What are the costs of the promises made to America by Donald Trump and Hillary Clinton?

Both candidates have made political promises that, if implemented, have both costs and benefits to the nation. While the analysis of benefits may be difficult to assess, the costs are not.

The Committee for a Responsible Budget (CRB) has issued a report, “Promises and Price Tags: A Fiscal Guide to the 2016 Election” that estimates how our national debt would rise under the programs of both presidential aspirants. It shows that gross debt held by the public would rise from about $19 trillion today to $23.9 trillion by 2026 under Hillary Clinton’s plan and to $35.2 trillion under Donald Trump’s plan.

They based the estimates on the public positions taken by each campaign as of June 24, 2016. They also generated a low, central, and high cost estimate of the fiscal implications of Trump’s and Clinton’s proposals.

We need to stop and say that our gross debt will rise no matter who is elected, since under existing law, gross debt is projected to rise from about $19 trillion today to about $29.1 trillion by 2026, about a 50% increase. With that in mind, here is CRB’s summary of the impacts of both candidate’s plans on the national debt: 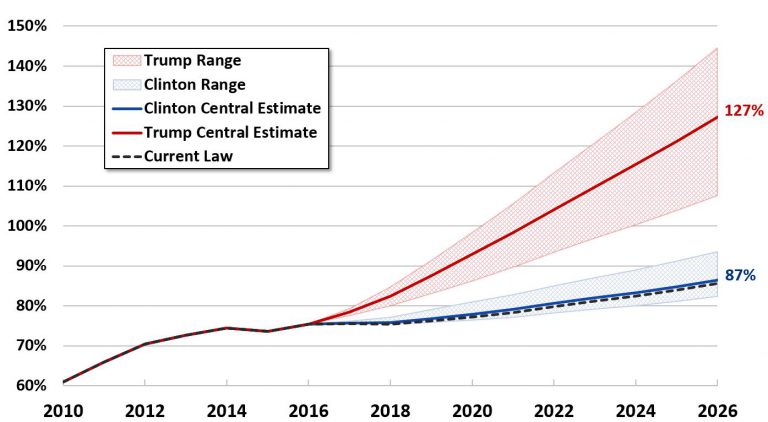 Donald Trump has expressed concern about the dangers of our current $19 trillion debt. Yet his plan would increase that number significantly. Under CRB’s central estimate of Trump’s plan, gross debt would more than double from $19 trillion today to $39.5 trillion by 2026.

The increase in gross debt under Clinton’s plan would be smaller but still significant. Under the central estimate of Clinton’s plan, gross debt would rise by more than 50%, from $19 trillion today to $29.6 trillion by 2026, in line with the current law. So, her promise to pay for new spending seems to be true.

Digging a little deeper, here is CRB’s breakdown of both candidates’ plans by revenue, costs and spending. Most of Hillary Clinton’s increased costs come from spending in non-health, non-retirement programs:

The largest share of Trump’s deficit impact comes from his proposed individual and business tax reforms, which would reduce revenue by about $9.25 trillion:

So, what happens to the total amount of our national debt?

Donald Trump wants to dramatically reduce taxes for most Americans while maintaining spending relatively near its current levels. As a result, under CRB’s central estimate, he would add $11.5 trillion to the debt through 2026.

Hillary Clinton wants to increase both spending and taxes, adding about $250 billion to the debt over 10 years under CRB’s central estimate. Under their low cost estimate, Clinton’s plan would reduce 10-year deficits by $150 billion.

Increases in debt are not always a bad thing, particularly in times of economic slack, if the debt accumulation is driven by stimulative fiscal policy. But a 40 percentage point of debt to GDP increase, from 87% of GDP to 127% of GDP, seems unlikely to give us a positive outcome.

But, if we elect The Pant Load, that’s what we will get. Trump said to the WaPo in May:

This should worry you. Trump went on to say:

So, Trump would stiff the nation’s creditors. Haven’t we had enough of Republican mis-leadership on the nation’s finances?

Remember that it was the GOP-led Congress that threatened not to raise the debt ceiling in 2011. That led to the Standard & Poors rating agency’s lowering of the US credit rating.

Think carefully about what Trump’s glib plans imply for America.