(There will be limited blogging until 8/25, as Wrongo and Ms. Right visit Glacier National Park. Keep your tray tables in the upright and locked position while we are away.)

One of Wrongo’s earliest memories, a fragment, was riding in the car with my parents. When I asked where we were going, my mother said: “To elect Mr. Dewey president.” That was 1948. And here is a graphic example of what civic-minded Republicans were doing in Pittsburgh in 1949: 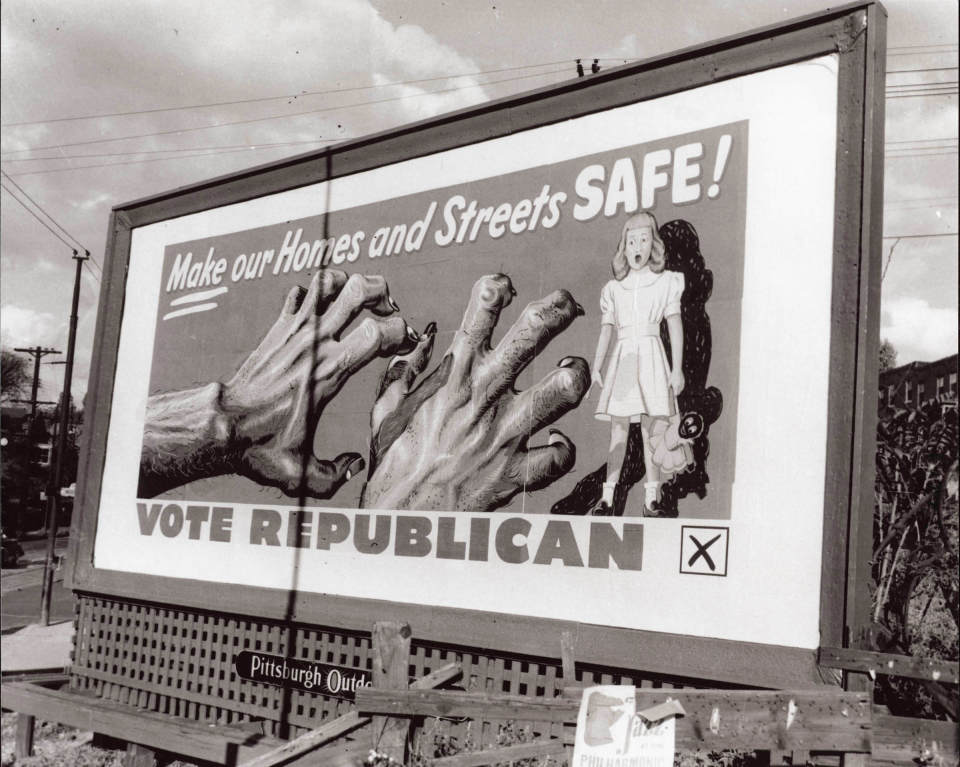 The photo was taken by Charles “Teenie” Harris, and is in the archives of the Carnegie Museum of Art. It is part of a show of his work that opened on Aug. 13. Pittsburgh was Harris’s home town.

Note the predator’s clutching fingers. Note the long nails that Americans imagined that their Japanese enemies had in WWII. Note the blackface doll carried by the little white girl. While many Blacks in the north still voted for the Party of Lincoln in 1949, this billboard was in many ways a “dog whistle” for the white community of Pittsburgh.

The billboard was part of the Republican Party’s “informed debate” in Pittsburgh’s mayoral election in 1949. Their message was that the streets were not safe for women and children. This, at a moment in American history when we were not suffering lots of crime. In fact, there was a drop in homicides in the immediate post-war period.

There was pushback against the billboard, even among Republicans, in fact, the Pittsburgh Outdoor Advertising Co. refused to honor their contract to put up 100 copies of the image once they saw it. They had to be forced to do so by a local judge, who called the picture “a shocking example of bad taste.” Within a week of the billboard’s appearance, however, the Republicans themselves decided to replace it with a less offensive image. From Blake Gopnick at Artnet:

Back then, at least, a Republican candidate could realize he’d crossed a line and decide to step back from it.

That’s much too much to ask in 2016. Of course today, the Republicans would say the way to make that child safe would be to give her a gun and tell her to lock and load.

So another Monday morning wake-up for the GOP. To help them join the rest of us in the real world, here are Belle and Sebastian with “Olympic Village, 6am”. As we start the second week of the Olympics, the focus shifts to track and field, and so does this video: