When we think of entrepreneurs involved in renewable energy, usually just one name comes to mind, Elon Musk, a smart guy who has given Tesla a new meaning. He just merged Tesla with Solar City.

But smart entrepreneurs in solar are emerging. The NYT wrote yesterday about Nicholas Beatty, a former banker who has covered about 25 acres of his farm in England with solar panels. This isn’t a new phenomenon, lots of farms have solar arrays both in the UK and elsewhere, most of which also use Rooftop Solar Forecast software to plan and manage energy use around solar intermittency:

What’s new in Mr. Beatty’s field is a hulking 40-foot-long shipping container. Stacked inside, in what look like drawers, are about 200 lithium-ion cells that make up a battery large enough to store a substantial portion of the electricity the solar farm puts out.

The battery and its smart software give Mr. Beatty an advantage over other solar panel farmers. Power prices rise and fall depending on the supply and demand. The spread between the high and low price can be dramatic. By storing power in the battery, Mr. Beatty can feed it into the grid when prices are high:

Improved industrial-sized batteries are a way of achieving that flexibility. Mr. Beatty’s battery storage system cost about $1 million, but could increase revenue for his solar farm by as much as $250k per year. Beatty is one of many entrepreneurs and businesses trying to play the fast-shifting electric power landscape. This is a capital-intensive business:

Improved battery storage and its smart controlling software has been one of the two pillars required to make solar power competitive with non-renewable energy sources, you could definitely say that this is a case where the question Deep Cycle Versus Shallow Cycle Solar Batteries comes into play. The other is the cost of solar panels. Tesla has been working on both axis. They have built a solar demonstration project on the island of Ta’u in American Samoa that generates 1.4 megawatts of energy. The microgrid has 60 Tesla Powerpacks, the company’s large commercial battery with 6 megawatt hours of battery storage. These batteries can be fully charged with only 7 hours of daylight from 5,300 solar panels.

The microgrid facility can fully power the island of 600 residents for 3 days on battery power. It is expected to save the island 109,500 gallons of diesel per year or $8 million in fuel costs. Ta’u previously relied on diesel fueled generators for power.

Cost of solar energy per kilowatt or megawatt hour has been uncompetitive for a long time, but that is changing. And most countries and most US states now are willing to purchase power from independent generators, like Mr. Beatty in the UK. Many in the UK, including in locations like derby, are following suit and investigating how they can benefit from installing solar panels to their properties and harness the renewable power of the sun for themselves. The Economist has this chart of the relative costs of sources of energy: 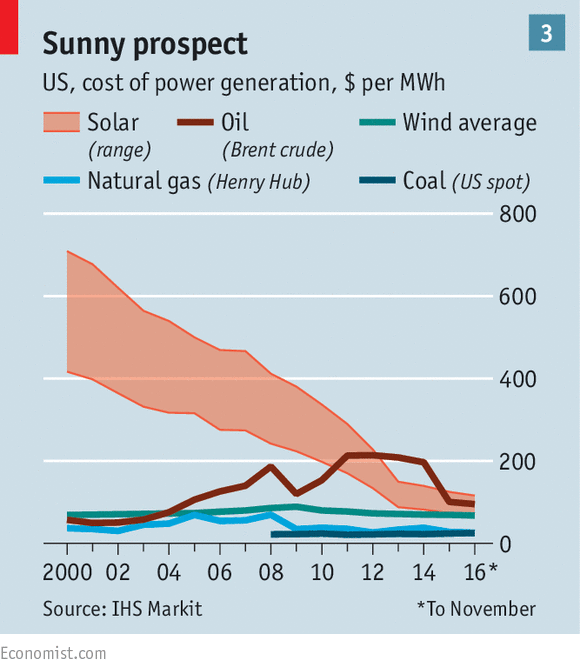 All of this means that American farmers could open a new revenue stream by becoming smart solar power generators. Farmers own large acreage in sunny locations. They have a deep understanding of farming, another capital-intensive business. They understand that farming is a climate-dependent enterprise, another factor in common with solar power generation.

A key factor is whether their state allows interconnection with the power grid, and whether the state’s program to pay the independent power generator for power sent to the grid at an economic rate.

Let’s hope that Donald Trump’s fascination with coal doesn’t lead to bad policy. The Economist reports that Trump has promised to make more public land available to miners; but access to coal reserves isn’t their problem. Coal employment peaked in the 1920s, and today, fewer electric utilities want to use coal. If he intervenes on behalf of coal, he will be actively handicapping renewables and natural gas. If Trump’s energy policy is focused on a few unprofitable coal-mines, China will take a commanding lead in batteries, solar panels and wind turbines. That wouldn’t be so smart.

We are at a time when the cost of solar energy has dropped dramatically, and with greater economies of scale, it will fall even further.

It is past time for a few smart entrepreneurs to take up the disruption of the fossil fuel industry and its fellow travelers, the electric utilities.