Today is the Trump Inaugural. So many preparations, and so much detail for the transition team to worry about. From the no stone left unturned department, comes this from the WSJ:

Workers preparing for the Trump Inaugural have taped over the name of the company — “Don’s Johns” — that has long supplied portable restrooms for major outdoor events in the nation’s capital…Virginia-based Don’s Johns calls itself the Washington area’s top provider of portable toilet rentals. But the name apparently strikes too close to home for inaugural organizers.

Too close to Donald John for Donald John Trump? Of course. Somebody placed blue tape over the company name on dozens of portable restrooms installed near the Capitol for the inauguration. The company says they didn’t do it. But, the company’s name is clearly blocked from the TV cameras: 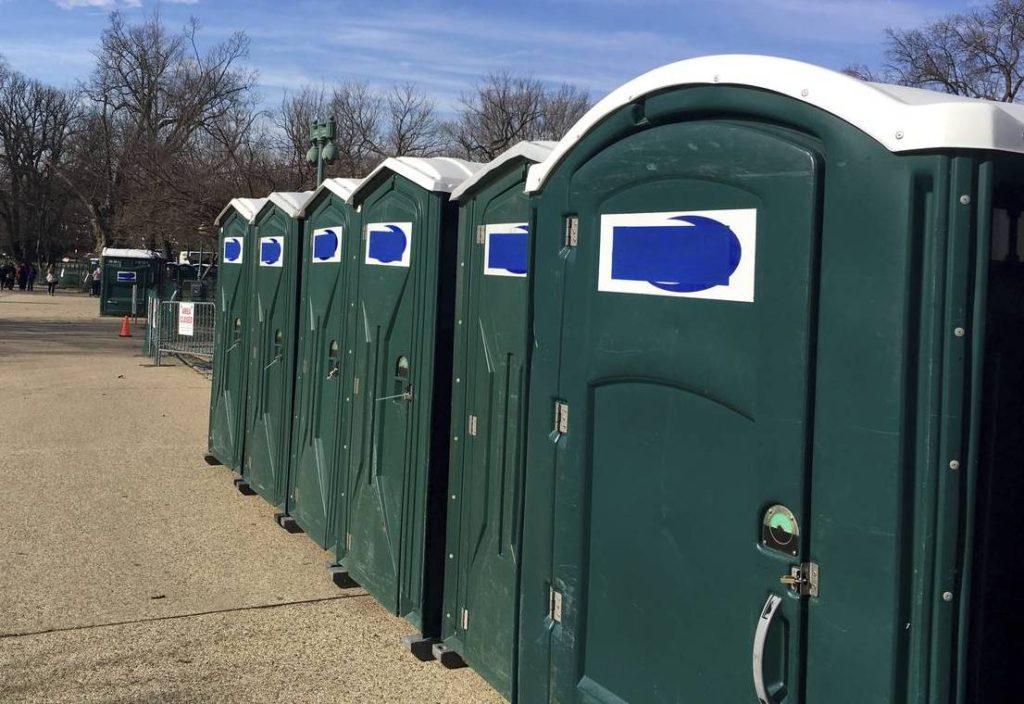 Once Donald J. Trump becomes the 45th president of the US, he will certainly push the agenda that got him elected. We all will need a way to sort the signal from the noise that we will hear from both his partisans and his opposition (which includes the Wrongologist). When you hear people raising reasoned questions and objections to Trump’s proposed policies, odds are that you’re listening to the kind of dissent that’s essential to our democracy, and you ought to take it seriously. For the kinds of arm-waving, emotional, knee-jerk support (or criticism) that you will hear every day, feel free to ignore that. You will know the knee-jerk stuff, since it will be sung in harmony by all the other partisans. And the media will repeat it often for your consideration.

Wrongo has serious problems with Trump, but is hopeful that his administration will:

If he normalizes relations with Russia, extracts us from the messes in Iraq and Syria and if he encourages domestic jobs growth, Wrongo will likely sign up for all of that. If he pushes through a big infrastructure bill that isn’t a wealth transfer to corporations, Wrongo will probably go along with that as well.

Wrongo does not trust Trump or the GOP on health care insurance. He worries that Republicans will throw a number of Americans under the bus, causing a great deal of unnecessary pain.

You can be sure that Trump is going to try to do some terrible things over the next four years, such as appointing ideologues to the Supreme Court. But, Congressional Republicans will clearly attempt far worse things than will The Overlord.

So the terrible fact is, we have to count on Trump to rein in the worst of the GOP’s ideas and instincts.

Needing to trust Donald Trump is enough to frighten anyone.

Trump tweets continually to rally his supporters while simultaneously manipulating the media. It’s unnerving. Saying that Trump is terrifying, while correct, is useless. The most obsessive of his opponents focus on worst-case scenarios that are designed to rally (and raise money from) the anti-Trump troops among us. Sadly, that strategy largely guarantees that the opposition will look disorganized and fragile. It also causes the American center-left to be fragmented issue by issue, and therefore, unable to broadly challenge the GOP, at least in the short run.

The Dems need to coalesce around only the potentially win-able issues. Otherwise, they should “just say no” to any Trump legislation intended to weaken or break our social contract. Sen. Schumer is correct when he says that the GOP needs to own 100% of the pain they cause the average person, whenever they break the contract. Any Democrat that breaks ranks to support issues like cuts to Medicare or privatization of Social Security must be challenged from the left in the next primary.

Democrats did not believe they would be in this political mess. They are trying to find their footing, but establishment Democrats want to simply tweak the message, and stay the course.

However, the battle against Trump and the GOP majority must move from “Republican Lite” to a fight to put social justice and progressivism back on the table as viable options for all Americans.

Otherwise, it will be a precipitous fall from political relevancy for Democrats.

Establishment Democrats who profit from the status quo, have no incentive to come up with an agenda that appeals to people who are suffering because of that status quo. The great weakness of Hillary Clinton’s campaign was that she aimed her appeals at the minority of voters who would benefit from the established neoliberal order, while largely ignoring those who suffered under it.

That decision could cost the Dems for a generation.