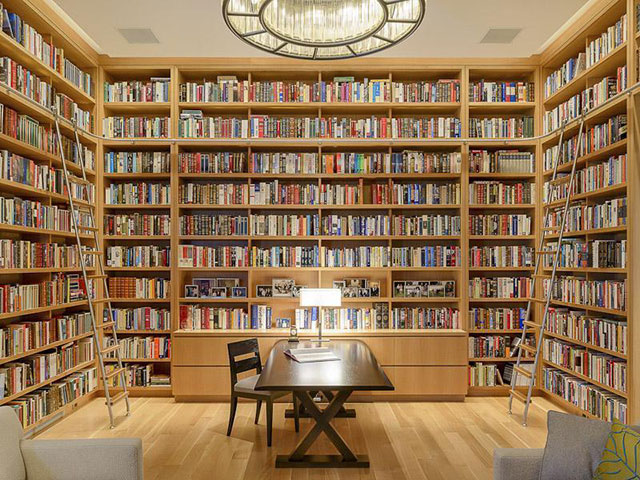 It’s Saturday, and Wrongo wishes he was sitting in that beautiful 5,000 book home library, drinking a Grande Chai Latte, listening to music, and distracted from the world at large.

But reluctantly, Wrongo watched some of Trump’s press conference on Thursday (transcript and video here). His presentation style is obnoxious. He adds opinions and adjectives to everything that he, or anyone else says. The point is that he NEEDS to tell you that his shit is great, and yours stinks.

He has memorized a list of both positive and negative adjectives, and he fires them in volleys as he speaks. He said that he has made “incredible progress” so far. Every new POTUS claims to make progress on something in the early weeks, but generally, they leave it to the media and public to evaluate the claim. Trump however, gives us the first glowing review of his work, and if possible, the first negative review of his opponents.

This is highly problematic for fact-based observers, because they have to evaluate not only “progress” but “incredible progress”

He is willing to lie about things that a ten year old could fact check. A lot of his shtick is a continuation of his basic campaign speech, and nobody needs to waste time refuting that BS. We can just roll our eyes, and move on.

However, we should be very concerned about how completely he controlled the press conference. It seemed to Wrongo that the press corps acted in a less than first-rate manner when on their feet. They had few sharp or pointed questions, and they allowed Trump to repeatedly call them out for trading in fake news.

Why didn’t anyone point out that the slow confirmation process for Cabinet positions is due mostly to Trump naming his appointees late, followed by submitting the required paperwork slowly?

Trump gets away with his whining because the press spends time trying to play “gotcha” with the Jedi Master of gotcha: Did you see what he did to Rep. Elijah Cummings? They should be exposing that half of what Trump thinks he knows is wrong. But he sure knows how to hold a press conference, and we should probably expect him to do more of them than any previous POTUS.

The Trumpets like the notion that he’s going to “Shake things up“, but he plans to go well beyond shaking things up. For example, he wants to change the balance of power with the other two branches, and it appears that many of his supporters actually want that to happen.

It he pulls that off, say bye-bye democracy.

Wrongo gets incensed when powerful people attack the weak and vulnerable. He believes in the importance and value of facts and rational thought. But Trump, and his so-called mainstream Republican buddies keep moving farther and farther away from these values.

We could try to look at each lie or obfuscation in Trump’s press conference, but something is lost when you look at the trees rather than the forest.

And its Trump’s forest of total bullshit that needs to be chopped down by what remains of the independent media.

Enough! It’s Saturday, and we need to kick back and relax. Here is Anne-Sophie Mutter playing “Méditation”, which is a symphonic intermezzo from the opera Thaïs by French composer Jules Massenet. The piece is written for solo violin and orchestra. The opera premiered in Paris in 1894: