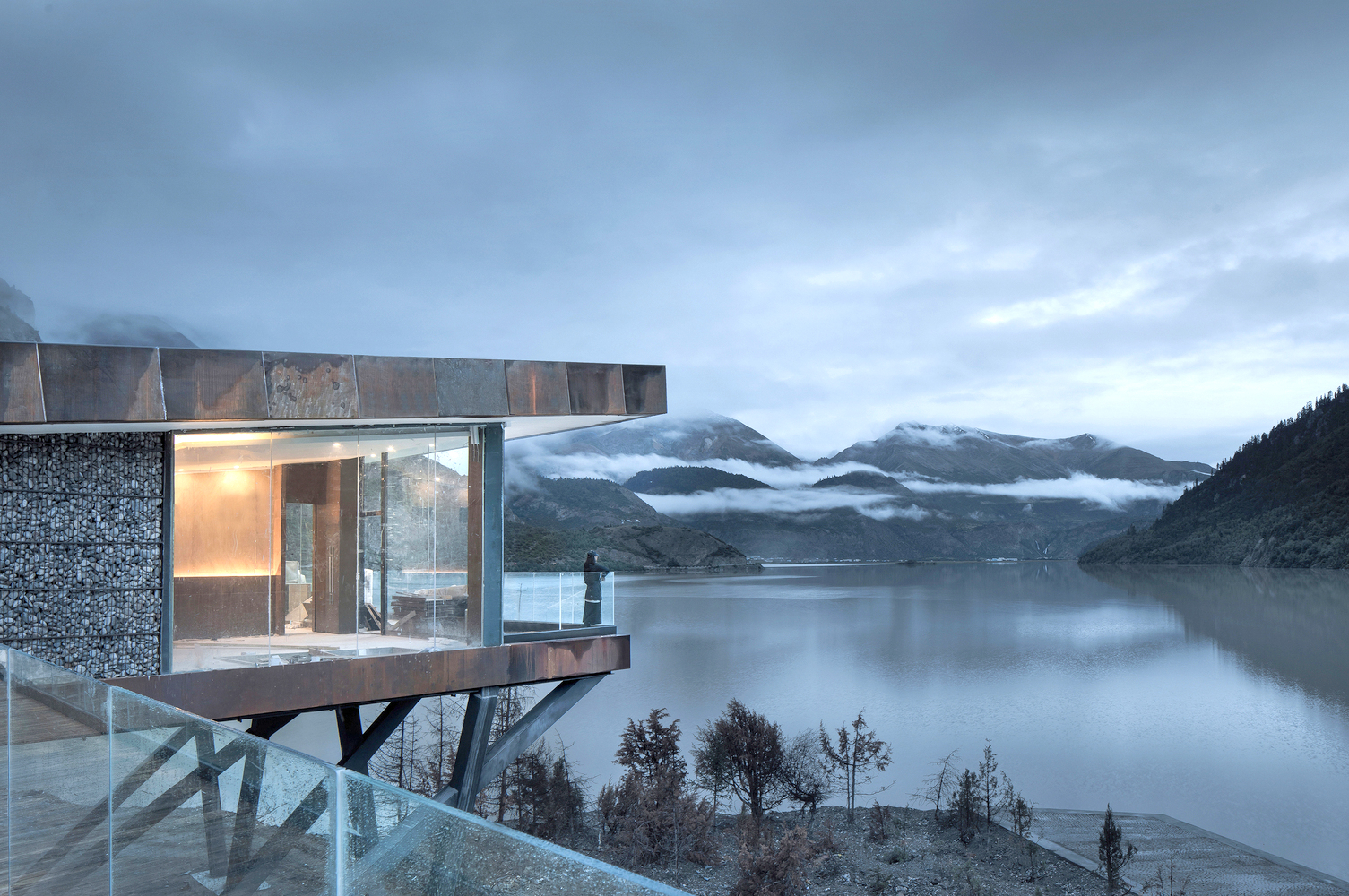 Ranwu Lake Campsite, Tibet – photo by Arch-exist Photography. Ranwu Lake is a tourist attraction in SE Tibet, and is called the “Tibetan Switzerland”.

Life in the age of corporatism resembles life in the food chain. In a potentially disastrous outcome from the Harvey flooding, a chemical plant in Crosby, Texas belonging to French industrial giant Arkema, has had several explosions of peroxide and other volatile chemicals. From the NYT:

The company had already ordered all workers to leave the damaged plant, and Harris County ordered the evacuation of residents within a 1.5-mile radius.

These chemicals have to be refrigerated and stored in safe Storemasta containers to avoid further damage. When the plant’s warehouses lost power, they transferred the product to diesel-powered refrigerated containers. But later, the backup generators were swamped by flood waters, so cooling was lost, and the explosions began. On Tuesday, the company released a statement:

Refrigeration on some of our back-up product storage containers has been compromised due to extremely high water, which is unprecedented in the Crosby area. We are monitoring the temperature of each refrigeration container remotely….while we do not believe there is any imminent danger, the potential for a chemical reaction leading to a fire and/or explosion within the site confines is real.

The rains are over, but the chemical fires linger. Richard Rowe, the CEO of Arkema’s American operations said:

The CEO says, “No way to prevent explosion“. Back in the olden days, that would be known as a “major design flaw”. Most engineers would have recommended placing the generator sets above at least the 100-year high water mark, just to prevent this kind of fun event. They would also put the diesel tanks above that water line.

Maybe next time. The Houston Chronicle had this amazing map of chemical plants in the Houston area: 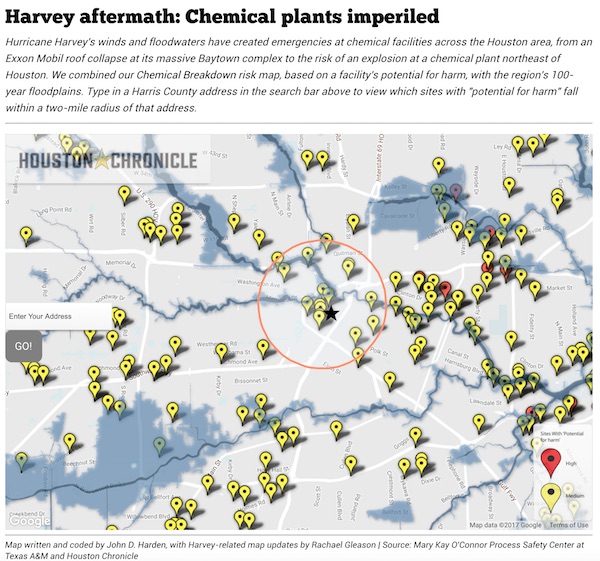 In case it is hard to read the map legend, the yellow markers are for petrochemical plants that have a “medium” potential for harm based on their location within the 100-year flood plain. The red markers have a “high” risk for harm. Houston’s ship channel and the surrounding area along the Gulf coast represent about 40% of U.S. petrochemical manufacturing. At least 25 Houston-area plants have either shut down, or experienced production issues due to Hurricane Harvey’s flooding.

Any guesses that the concentration of plants in the Houston flood zone will cause our corporate overlords to think about relocation of a few of these sites? Or, how they best secure them from the next 500-year flood, which looks like it will happen in say, the next five years? From Forbes:

Harvey was a wake-up call, reminding us that it is time to take a more serious look to ensure the safety of the petrochemical industry and the public at large, just as the nuclear power industry has done in reaction to the Fukushima disaster.

But Arkema has worked hard to change EPA rules in their favor. David Sirota reports that the new rules, which were set to go into effect this year, were halted by the Trump administration after a lobbying campaign by Crosby plant owner Arkema and its affiliated trade association, the American Chemistry Council:

Those rules – which would have taken effect on March 14 – were blocked by EPA administrator Scott Pruitt. The move was a big win for the chemical industry that has spent more than $100 million supporting federal lawmakers since 2008.

Apparently, sacrifices must be made in the name of making America great.

The closures are not just disrupting markets; they’re also causing the release of toxic pollutants that pose a threat to human health. The NYT reports that damaged refineries and oil facilities have already released more than two million pounds of hazardous substances into the air. Facilities within hazardous industries should implement safety measures such as a high speed safety door to ensure hazardous materials are contained.

The sheer number of facilities around Houston that have to come back online at the same time creates another huge emissions problem. From City Lab:

The real problem is that the plants are allowed to operate so close to residential areas in the first place. Houston’s lack of zoning regulations have been front-and-center in discussions about why Harvey has been so terrible for the city, and that’s no different in the discussion about air pollution.

Not to worry, Houston, your petrochemical corporations will be fine. They have insurance. They will get to write off any damage against their profits. They will get tax incentives to rebuild, or if they choose to move, tax credits from the town down the road.

The people? Most will have no insurance to rebuild their homes or to purchase new furniture.

And the pollution impact? A cost of doing business for the petrochemical industry.

Unfortunately, for the people, pollution’s about their health. And there will be no help forthcoming for the most vulnerable Houstonians.

Have a slice of Texas-themed music: Here is Robert Earl Keen, doing “Corpus Christi Bay” from his 1993 album “A Bigger Piece of Sky”: