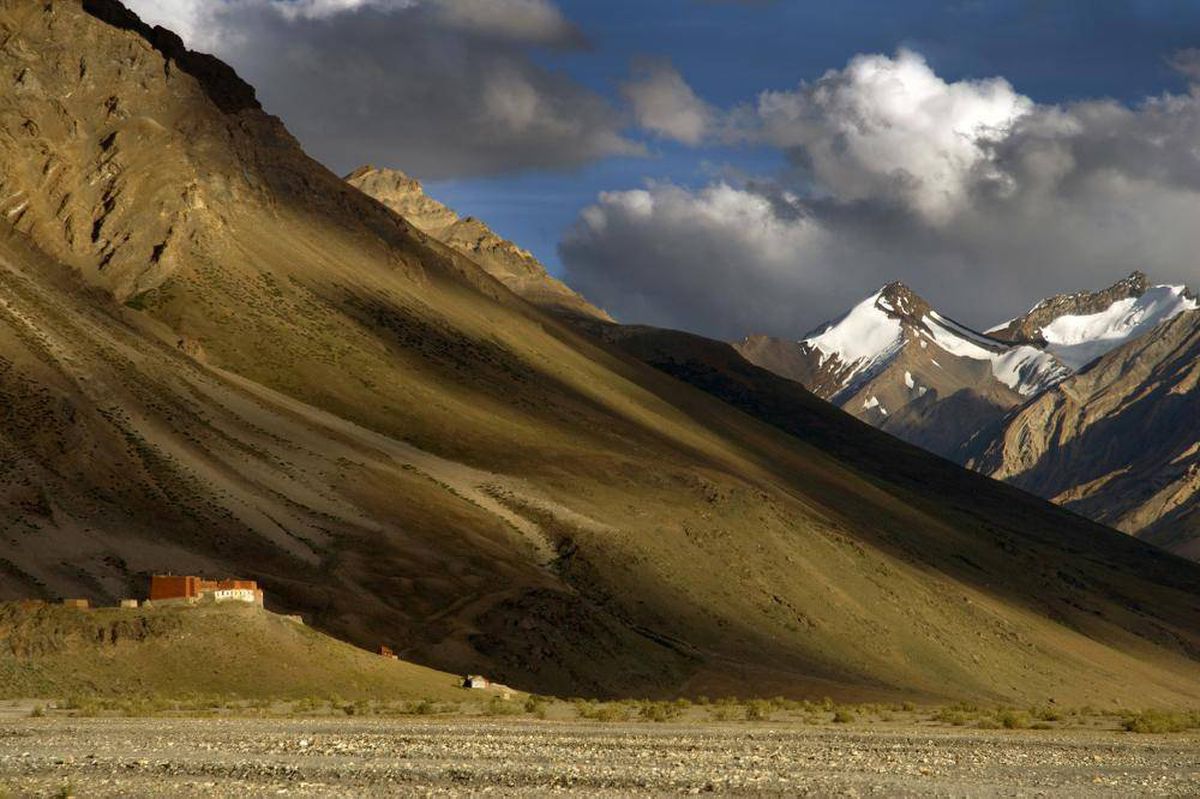 Rangdum Monastery, Suru Valley, India. While the monastery is Buddhist, most of the residents of the Suru Valley are Shia Muslims – photo by Sugato Mukherjee

Are you tired of reading about North Korea (NK)? Wrongo is certainly tired of writing about it. Steve Coll had an interesting take on the war between Trump and Kim:

In the history of nuclear diplomacy, no nation-state has ever given up atomic weapons in response to shrill threats.

We all have noted the continuing tit-for-tat between Donald Trump and Kim Jong-Un. Pat Lang has described the state of play between them as “Simian Mutual Hostility“, giving a name to the image of monkeys throwing their poo at each other in anger.

Are we now just one miscalculation away from the collapse of the Korean Armistice? Or worse, the start of the Second Korean War? Can cooler heads on both sides ratchet back the simian hostility?

Possibly. Since Trump’s election, NK representatives have been interested in figuring out Trump’s strategy. The WaPo reports that:

North Korean government officials have been quietly trying to arrange talks with Republican-linked analysts in Washington, in an apparent attempt to make sense of President Trump and his confusing messages to Kim Jong Un’s regime.

Their number one concern is Trump. They can’t figure him out.

So, could Trump calling Kim “Rocket Man” be a carefully calculated master stroke of foreign policy? It could, but don’t count on that. Trump did use “Crooked Hillary” to his advantage, but will calling Kim Rocket Man change the world’s perception of Kim in ways beneficial to America?

It seems more like a direct challenge from an older man to a younger one, to put up or shut up. It appears that Trump is trying to goad Kim into an openly hostile reaction that could justify a US attack in “self-defense”.

That would be following the Tonkin Gulf playbook, as used by LBJ in 1964. After the attack, which to this day looks like a fabricated incident, the US had a pretext to escalate its involvement in Vietnam, with disastrous consequences. We wouldn’t leave Vietnam for another 11 years.

An air-zone intrusion near (in) NK waters is a perfect way for Trump to replay the Tonkin Gulf plan. Trump may hope that NK will attempt to shoot down one of our B-1B’s. The issue of whether the attack happens in NK territory or in international waters will be disputed, and will not be really understood by the media.

And what about NK saying “it’s an act of war”? “b” at Moon of Alabama says that NK had declared something an “act of war” or a “war declaration” some 200 times in their press, so, perhaps we shouldn’t take exception quite so strongly.

The landscape is that we have two leaders willing to say anything, hoping that the other guy starts the actual fight.

Let’s remember that China and Russia have asked the US to be patient with NK. China has a mutual defense treaty with NK, and has said it would react if NK were attacked. South Korea’s president said he does not want a war to happen.

Our “missile shield” for the US homeland isn’t reliable, yet our military has based its nuclear deterrence on it. And we revere these Pentagon guys as brilliant “strategists”. The systems do not work effectively, yet we act as if they will, and that the technical problems are solvable before we will need them.

We have no ability in the short run to defend the homeland against Kim’s ICBMs, but Trump’s idea is to goad Kim into a first strike.

The “big stick” mindset is at the core of the Pentagon’s philosophy. However, with China next door, and their stance clear, why does Trump continue to piss on Kim’s boots?

The US has a terribly flawed strategic position. When the monkeys are consumed with throwing the shit, the risk that something happens far down the chain of command increases. The Cuban Missile crisis could have escalated were it not for a level-headed US junior submarine officer.

“To overcome the perils of the present”, the President said at the UN last week, “we must begin with the wisdom of the past.” If only there were some evidence that Trump knew what that was, or how to use the power of his office to forge a less dangerous world.

NK has been a matter that we refuse to deal with rationally. Now the Trump team is spinning NK as something Obama left but Obama and Clinton favored diplomacy and Obama knew that any attempt to use diplomacy would fail b/c of Congress (as it did with Clinton). And both were followed by presidents who went out of their way to insult NK.

You cannot make this stuff up!

I see haunting parallels with the origins of the World War I, having just read the first chapters of the book: “To Hell and Back: Europe 1914-49” (Ian Kersahw, 2016). By the way, its great to have both World Wars covered in one book since one led to the other.