Wrongo can’t let go of Gen. Kelly, or his comments in the White House Briefing Room.

Kelly said during his briefing that most Americans didn’t even know anyone who was in the US military. He then told the press corps that only those who knew someone in the military could ask questions. As if on cue, the first reporter who spoke started with the phrase “Semper Fi”— the motto of the US Marines in his question to the four-star Marine General.

So here, Kelly required a form of loyalty oath by reporters in order to answer their questions.

Does this concern any of you? There are risks in both our reliance on an all-volunteer military, and on our veneration of them as warrior-kings.

The all-volunteer military creates many different problems. Most important, a volunteer military has dangerously skewed the demographics of the military compared to the country. There are now big demographic differences between the professional military and America at large. Charles J. Dunlap Jr., a retired Air Force major general at the Duke Law Schools says: (emphasis and brackets by the Wrongologist)

I think there is a strong sense in the military that it is…a better society than the one it serves…[The military is] becoming increasingly tribal…in the sense that more and more people in the military are coming from smaller and smaller groups. It’s become a family tradition, in a way that’s at odds with how we want to think a democracy spreads the burden.

Danielle Allen, of the Institute for Advanced Studies on Military Service wrote about the geographical implications of a professional military in the WaPo:

By the end of the draft in 1973, military service was distributed pretty evenly across regions. But that is no longer true.

Changes to the home towns of people in the military since 1973 align closely with today’s red states. The uneven pattern of military service is part of the cultural differences that characterize different regions of our country. This has broad ramifications for our democracy.

Heidi A. Urben, a Colonel, studied the attitudes of military officers, and found that about 60% said they identify with the Republican Party.

So, having a professional military exacerbates both our geographical and our political differences. 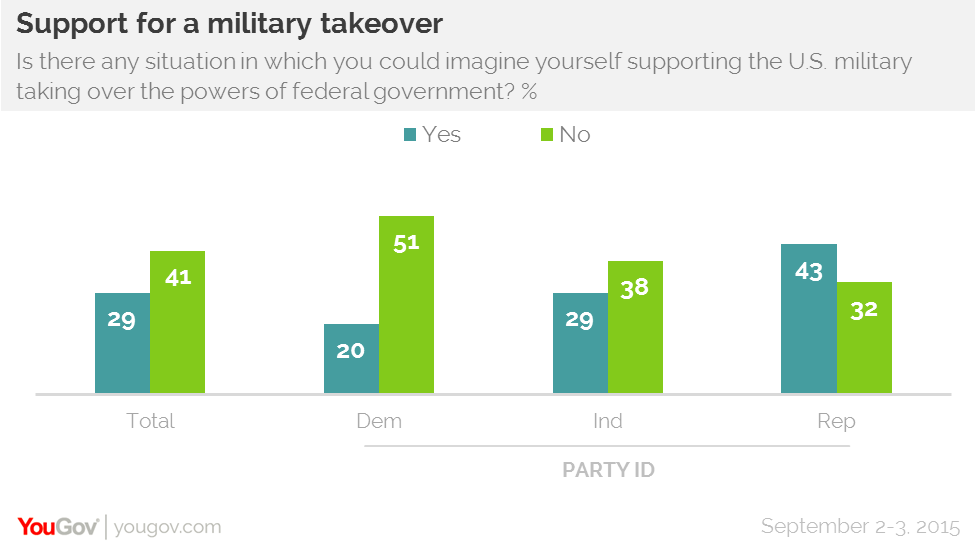 In other words, many Republicans believe a military coup might be necessary, and they can see themselves supporting it. This is a dangerous disconnect. A fascinating poll question was: (emphasis by the Wrongologist)

The answer implies that Republicans at least, think that our members of the military are Constitutional scholars.

The weakening of support for many of our institutions is clear: Every year Gallup asks Americans about their confidence with 15 major segments of American society. The police and the military routinely top the list with overwhelming support, while no other government institution inspires confidence among the majority of voters, including the presidency, the Supreme Court, public schools, the justice system, and Congress.

We all want to believe that those at the top of our military are too principled to launch a coup against the civilian government. But it’s clear that there is a current of thought running through the GOP and a significant minority of the military that believes there may be a better way to run the government.

And a highly persuasive General might easily find political support for a coup.

Time to wake up, America! The role of an all-volunteer military must be debated, as well as our veneration of them as warrior-kings.

The possibility of surrendering our democracy has rarely seemed as close as it is today. To help you wake up, here is The Who with “Won’t Get Fooled Again”, the last cut on “Who’s Next?” released in 1971.