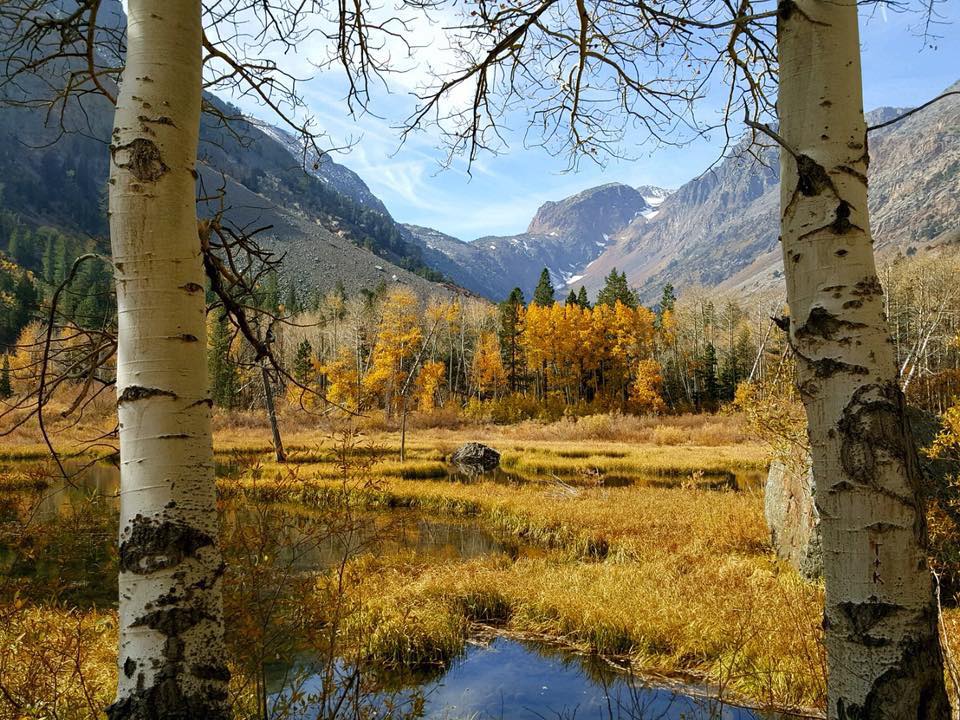 Fall in the Eastern Sierras – photo by Deirdre Harb

You may not remember the tangled history the US has with Iran, but you know that Trump decertified the Iran deal that was developed by the US and 5 other major powers (Russia, China, Germany, England and France). In his decertifying speech, Trump said:

We will not continue down a path whose predictable conclusion is more violence, more terror and the very real threat of Iran’s nuclear breakout…

Just three countries publicly support Mr. Trump’s decision: Israel, Saudi Arabia and the United Arab Emirates. We all know that Iran calls the US “the great Satan”, but we forget how we earned the title. Here is a quick review from the BBC:

Now, nothing in the above excuses Iran’s efforts to destabilize parts of the Middle East, or their deep, abiding hatred of Israel. Nothing excuses Iran’s role in developing and introducing the IED’s that were so lethal to US troops in Iraq.

Time has done little to heal the wounds that each country has inflicted on the other. Mutual enmity remains on full display.

But Trump, like Obama and GW Bush, searched for a way to reduce our presence in the Middle East and shift attention to Russia and China. The solution for all three Presidents was to pit Middle Eastern governments against one another creating a balance of power, attempting to prevent any single country from becoming too influential.

If they make war against each other, that’s an acceptable outcome, as long as Israel remains unscathed.

In that context, Iran’s pursuit of nuclear weapons was something that the US and its European allies couldn’t allow. The Joint Comprehensive Plan of Action (JCPOA), provided a means of halting the program’s progress without risking the outbreak of war. The deal prevented the possibility of an Iranian nuclear bomb destabilizing the region.

By attempting to reopen the JCPOA by withdrawing, Trump hopes to either rein in Iran’s regional meddling, or persuade Tehran to broaden the deal to include restrictions on its ballistic missile program, and on its support for militant groups, such as Hezbollah and Hamas.

Neither of Trump’s goals are reachable. Iran gains nothing by agreeing to them. And the US and the International Atomic Energy Agency (IAEA) agree that there is no evidence to suggest that Iran is not complying with the deal. So, as long as Iran upholds its end of the bargain, the Europeans plus China and Russia, are unlikely to agree with any US attempt to reinstate broad sanctions.

And Trump is making his negotiations with North Korea more difficult. Walking away from the Iran deal justifies North Korea’s belief that negotiation with the US on nuclear issues is futile. Particularly when one president’s agreement can be so easily torn up by his successor.

The American Right has considered Iran one of the “axis of evil” since 9/11. In that context, Trump’s desire to replace diplomacy with sanctions and eventually regime change, is ideologically consistent. The Right is simply using its electoral victory to advance a long-held policy.

We should remember that most of the GOP presidential candidates in 2016 were against the Iran deal, and probably would have acted similarly to Trump.

We are at a crossroads in our relationship with Iran. With the Iran deal, our long-term antipathy could have been moderated, and ultimately replaced by alignment of goals in the Middle East. Peace might have broken out.

But Trump has insured that will now take decades longer than it might have.

Can we also add that the US and Saudi’s supported and encouraged Iraq’s war against Iran. Iran has every reason to fear us and much to not trust us. We also don’t have to trust Iran, but they are little threat to us. On top of that, among nations in the middle east, it is the Saudi’s who fund terrorism of the sort that concerns us.

@ Terry: Good point about the arming of Iraq against Iran. Agree that the Saudis are the prime exporters of terrorism in the ME.