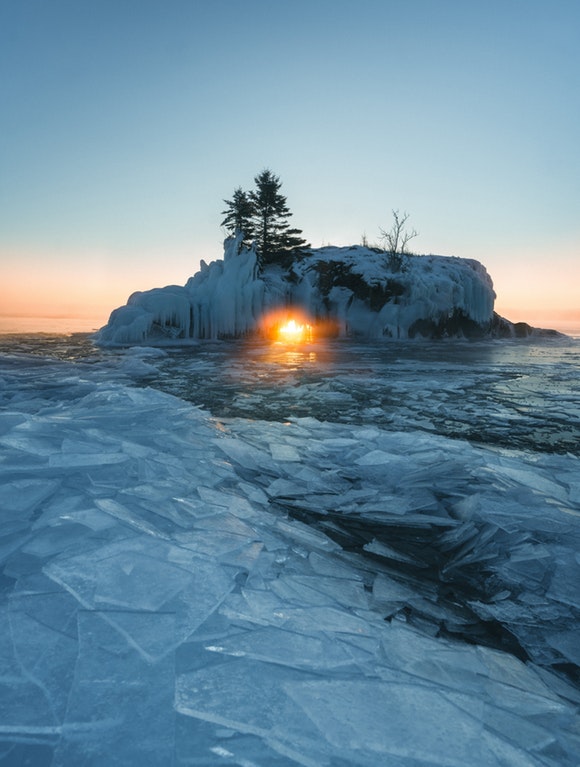 -15° sunrise through Hollow Rock, Grand Portage, MN. The sun lines up perfectly only twice a year – 2018 photo by Tuckolson.

Sunday brought a Super Bowl victory by the Eagles, as Wrongo predicted. The week begins with Mr. Market in charge of our financial destiny after the Dow dropped 666 points last Friday. Adding 200,000 new jobs and higher wages, possibly because of minimum wage rate increases in 18 states, should have been good news. But Mr. Market thinks wage increases mean wage inflation, and that weakens corporate profits, which cannot be tolerated. So we must be punished.

This week, the focus shifts to the Winter Olympics in South Korea (SK). And, the Trumpets plan to ratchet up their rhetoric about North Korea (NK). The Guardian reports that VP Mike Pence is leading the US delegation, and he plans a war of words on NK’s participation:

Vice-president Mike Pence will stop North Korea “hijacking” the Winter Olympics, an aide said on Sunday, by using his own presence at the Games to remind the world “everything the North Koreans do at the Olympics is a charade to cover up the fact that they are the most tyrannical and oppressive regime on the planet”.

North Korea wants to make this about cute photo ops. The vice-president is countering North Korea’s desire to control the message…We’re not going to cede two weeks of world media to North Korea.

So, no dice on cooperation between NK and SK. But, the reality is much, much worse. The NYT points toward signs that a war with North Korea may be coming. They say that the White House is frustrated by the Pentagon’s reluctance to provide Trump with options for a military strike against NK. HR McMaster, Trump’s national security adviser, believes that for Trump’s warnings to NK to be credible, the US must have better tactical military plans, including a “bloody nose” option. From the NYT: (emphasis by Wrongo)

But the Pentagon, they say, is worried that the White House is moving too hastily toward military action on the Korean Peninsula that could escalate catastrophically. Giving the president too many options, the officials said, could increase the odds that he will act.

Think about it: Our military leaders think that if they work up more tactical plans for striking NK, Trump will want to use one of them. And they think that would be a strategic mistake, since it will trigger a shooting war with NK that could kill millions on the Korean peninsula. It would almost certainly also threaten Japan, and draw in China as well.

Connecting the dots includes the disclosure that the White House decided not to nominate Victor D. Cha, a Korea expert, as ambassador to SK. Mr. Cha thinks he was sidelined because he warned the administration against a bloody nose military strike.

Then there is this: The WaPo’s Tokyo Bureau Chief, Anna Fifield flagged a report by a SK news outlet, Hankyoreh: (emphasis by Wrongo)

Fifield identifies Hankyoreh as “left-wing”, and says that it is the only news outlet currently reporting this. So, it could be nonsense, but it fits the messaging that the Trumpets are spooling out about NK. People keep wondering when Trump will reach rock bottom. Starting a war partially because you want to win the midterm elections would be it.

This sounds like something we need to know MUCH more about, and very quickly. The motives behind a preemptive strike transcend teaching Kim Jong Un a lesson. Trump might be thinking it would ward off Mueller’s possible charges, or the possibility of impeachment, if a Democratic Congress was seated in January 2019.

The quote may be fake news, but it’s not implausible that Trump’s administration could be thinking this. And it’s not clear which is more terrifying, that this thought is in the air in DC, or that some in SK are scared enough to make this up.

We need a serious discussion about preemptive war with NK. We are already living with the consequences of the unnecessary war George W. Bush started in Iraq, and we will pay for that for the rest of our lives.

We can’t let Trump start another.

Wake up, America! Time to find out what the truth is about giving NK a bloody nose. To help you wake up, here is My Morning Jacket with their 2008 tune, “I’m Amazed”: