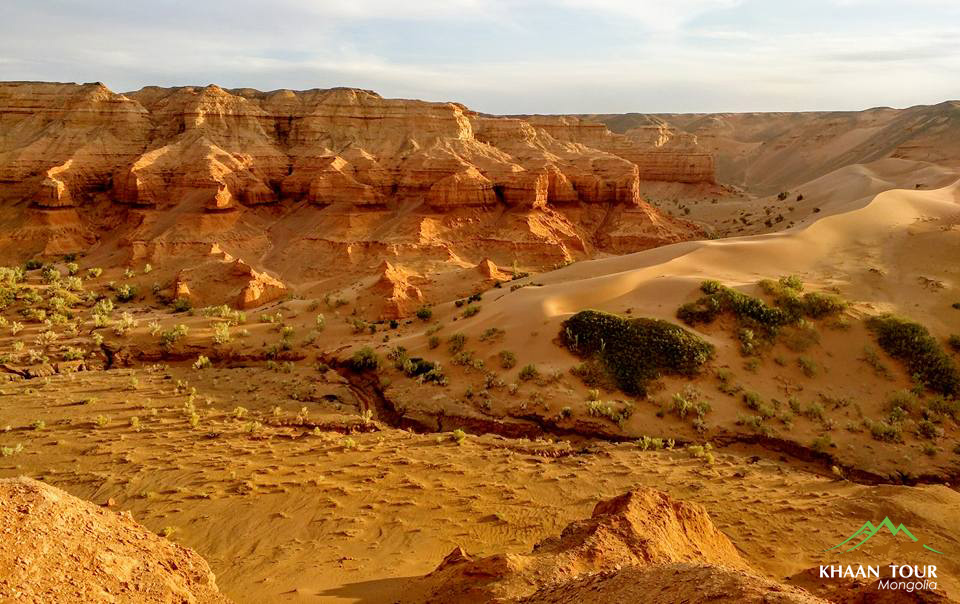 Bayanzag Flaming Cliffs is a region of the Gobi Desert in Mongolia. Photo via Khaan Tours. In the early 20th century, these cliffs gained worldwide fame for an incredible collection of fossils.

While in Europe, Wrongo finished reading “Genghis Khan and the Making of the Modern World” a history of the Mongol dynasty written in 2004 by Jack Weatherford, a former professor of anthropology. It is a fascinating journey from the 13th Century through the 14th Century. His specialty is histories of tribal peoples.

Weatherford presents Genghis Khan and his dynasty in wonderful detail. But the book reads as much like an adventure story, as it does history. Wrongo’s view of Khan was shaped as much by Hollywood caricatures as it was by his degree in history. It turns out that Khan was not simply the ring leader of a group of barbarians, he unified the Mongols, forming them into a fighting machine that conquered nearly all of Asia, the Middle East, and parts of Europe.

The book shows the important role of the Mongols in creating a precursor to the modern world. Initially, through warfare. Their military innovation was the lightly armed warfighter on horseback. Charging horsemen went against foot soldiers often accompanied by a relatively small, heavily armored cavalry. Genghis Khan was the original inventor of blitzkrieg. Time after time, the Mongols’ disciplined horsemen, moving in coordinated units, defeated much larger armies. The Mongol armies were undefeated for nearly 100 years.

But Khan’s greatest achievement was the redrawing of the boundaries of the modern world. His armies united a dozen Slavic principalities and cities into a large Russian state. They created a single state of China, and unified Korea and India.

It was the Mongolian Khans, rather than the Han Chinese, who founded Beijing. Their Yuan dynasty ruled until 1368.

The Mongols captured both Baghdad and Damascus in two years, something the European Crusaders had been unable to achieve in two centuries. The last Mogul in India was removed by the British in 1857. The Russians took over the original homeland of the Khans in Mongolia, in 1920.

Weatherford tells the story of the rise of Genghis Khan from a yak herding slave to ruler of the greatest empire on earth. Along the way, he ended the Mongols’ feudal system of aristocratic privilege and birth, replacing it with a system based on individual merit, loyalty and achievement. In most countries, the Khans expanded both cultural communication and trade. They were the first builders of the “Silk Road”.

Trade was key to the empire. Silk was the apex trade item, but cotton and wool were sent both to the East and the West. The Mongols made culture portable. It wasn’t just trade in goods, whole systems of knowledge were sent in both directions. Persian and Arab doctors went to China. Chinese doctors went to the Middle East.

And Khubilai Khan, the Great Khan emperor of China, recognized the need for paper money to facilitate trade, so it was used throughout the empire until its collapse. There was a dazzling array of innovations that can be ascribed to his reign: in addition to paper money, printed passports gave access to the entire Empire. There was a synthesis of knowledge from all corners of the Empire.

The Empire was ultimately carved up between Genghis Khan’s grandsons. They held cross-ownership in each other’s territories of trade networks and manufacturing facilities, which moderated their desire to fight each other. But, once the Black Death erupted in their networks, the Empire collapsed. It took about 300 years to finally end.

Genghis Khan was tolerant of all religions in a conquered country. He abolished torture, and brought back to Mongolia the learned and skilled members of each conquered nation to help to build the skills of his empire.

But the Mongols weren’t saints. In each conquest, the ruling class was rounded up and killed. The peasants and professionals were spared if they swore allegiance to the Great Khan. Although there are instances of extreme violence, these are balanced by the thoughtfulness and care that the various Khans took to administer and improve their vast empire.

We learn that some of his family were practicing Christians. That there was more religious freedom in Mongolia than in Europe at the time. He was willing to learn from his mistakes, a quality rarely seen in today’s leaders. And his attitude toward women was also surprising: his daughters became leaders, right along with his sons in the empire.

You end with a sense of how visionary and complex Genghis Khan was: An illiterate who appreciated learning, a marginal person from an obscure corner of the world who led a global empire.

This is a marvelous journey through time, about an era we rarely think of today.