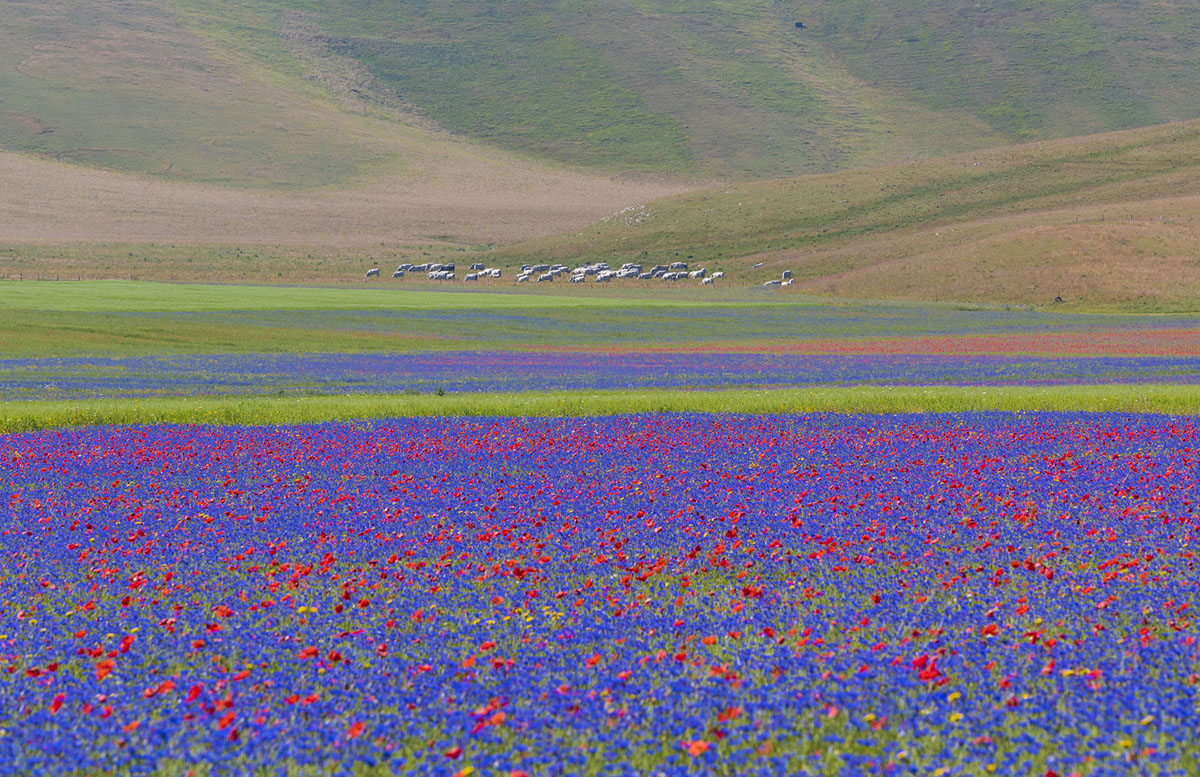 Cows grazing in fields near the village of Castelluccio in central Italy. In October 2016, a significant earthquake struck the area, badly damaging the village and roads—but farming still takes place and fields of lentils and poppies bloom every year, carpeting the land – 2018 photo by Maurizio Sartoretto

There are 31 states (plus the District of Columbia) with party registration; in the others, such as Virginia, voters register without reference to party. In 19 states and the District, there are more registered Democrats than Republicans. In 12 states, there are more registered Republicans than Democrats. In aggregate, 40% of all voters in party registration states are Democrats, 29% are Republicans, and 28% are independents.

Sabato says that overall, the current Democratic advantage over Republicans in the party registration states approaches 12 million voters. But, they don’t turn out to vote.

There are a number of major states that do not register voters by party, including those in the industrial Midwest: Illinois, Indiana, Michigan, Ohio, and Wisconsin. Add to that, Texas, Georgia, and Washington. If they did register by party, Texas, Georgia, and Indiana would certainly add to the Republican total. Sabato’s team produced this map illustrating the breakdown of registered voters (RV) in the table below: 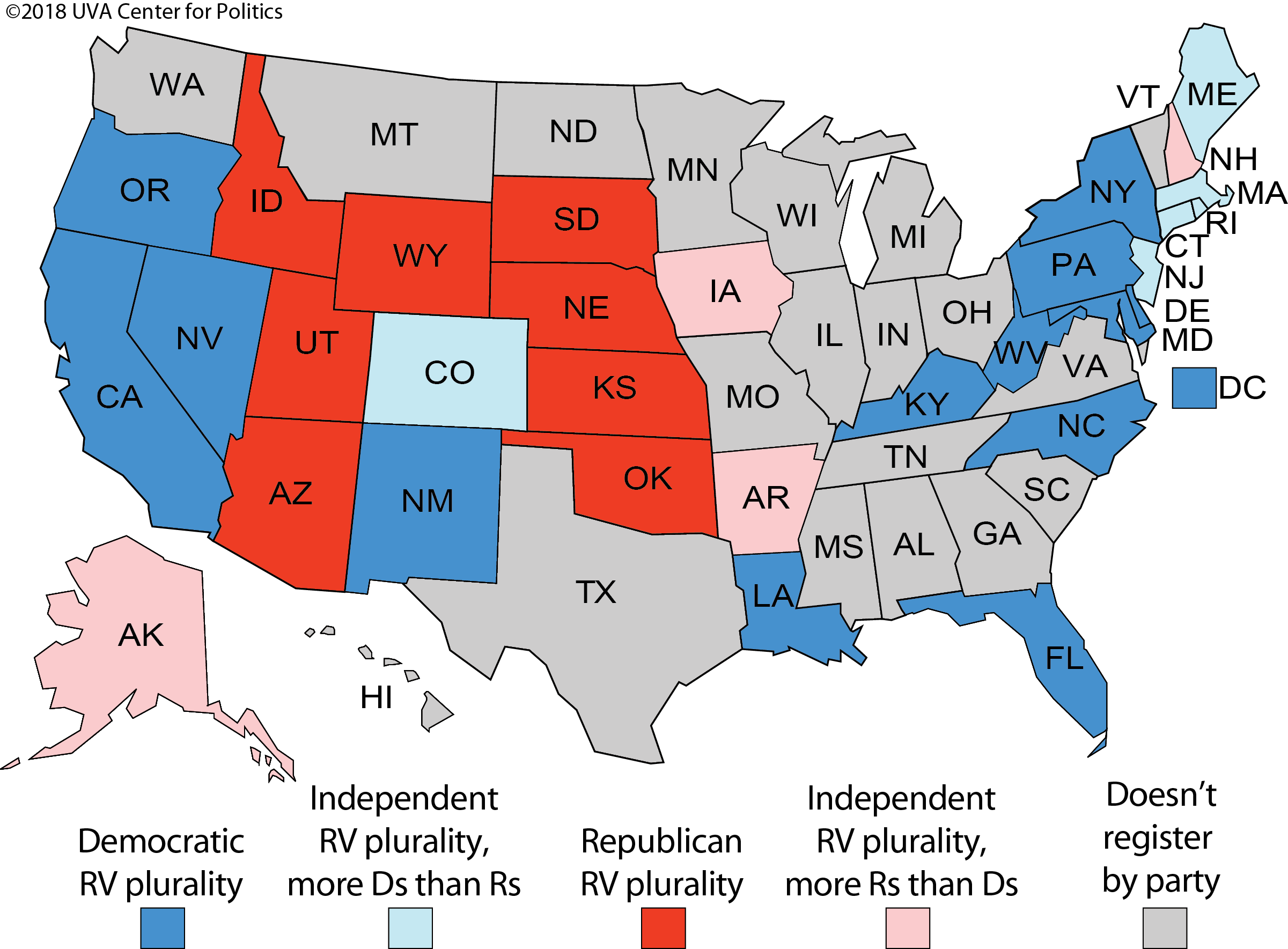 More from Sabato: (emphasis by Wrongo)

But the message gets worse for Dems, and it’s all about voter turnout. In 2016, falling participation defined the election, as pivotal swing states such as Wisconsin and Ohio saw voter participation drop by approximately 3% and 4% respectively, compared with 2012.

The Center for American Progress says that during the 2016 primaries, only 28.5% of eligible voters cast votes for party candidates, while only 14.5% participated in the 2012 primaries. For local mayoral elections, participation fell below 20% in 15 of the country’s 30 most populous cities.

The latest data available that break down voter turnout for midterm elections by state is for 2014. And it makes a disheartening case for Democrats, particularly in those states with a Democratic voter registration plurality where Trump won. Here is the breakdown of voter turnout by state: 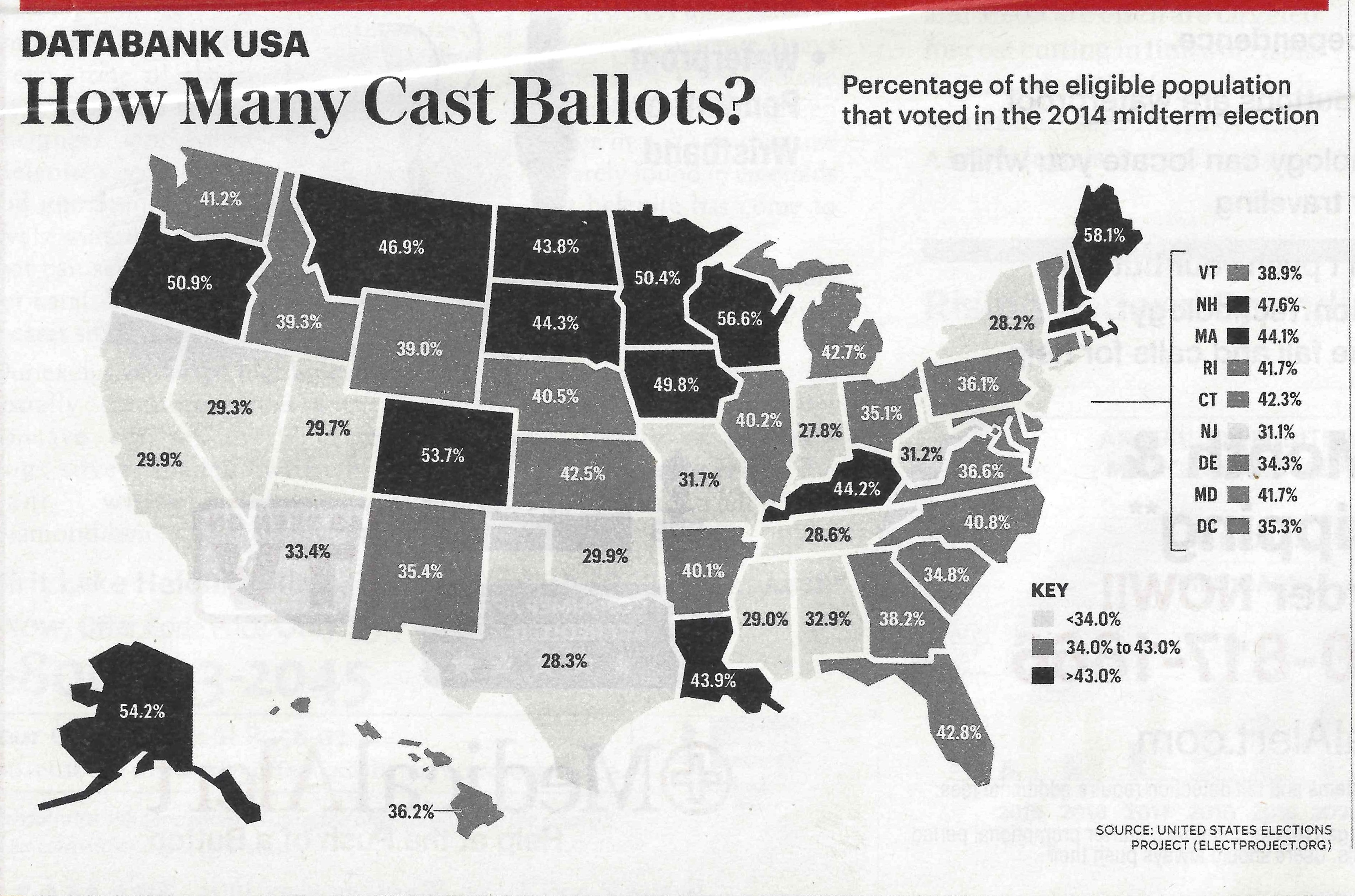 In 2014, there wasn’t a lot of Democratic sentiment in the highest turnout states. And in the six states where Dems have a registration advantage, but the state voted for Trump in 2016, this was their 2014 voter turnout:

This shows their turnout was substantially higher than the national average. If these states repeat the same turnout this November, chances are that the House will stay in Republican hands. Now, the data are from 2014, and the country is more energized politically in 2018 than it was four years ago, so generalizing may not provide us with a correct answer.

For what it’s worth, only five states had turnout over 50%: Alaska, Colorado, Maine, Michigan, Oregon and Wisconsin.

But can we fix turnout? The usual barriers we talk about fixing are:

But, a 2017 Pew study found that the most common reasons registered voters gave for not voting in the 2016 elections had little to do with barriers to turnout: they “Didn’t like candidates or campaign issues” (25%); followed by those “Not interested, felt vote wouldn’t make difference” (15%); “Too busy or conflicting schedule” (14)%; and “Illness or disability” (12%).

Having charismatic candidates with messages that resonate is the easiest fix, but we are locked into a system in which career politicians work their way up the ladder, trying to be as bland as possible.

People have to become angry enough to force our current system to change.

The real question is: Why aren’t they already angry enough?

I am wondering if voter turnout can increase by communities making it their business to work together to increase voting. My campaign is called Wake Up the Vote Wilkinsburg, we did a pilot campaign in the 2018 general election and voting numbers went up significantly, now we are working to do it in other communities. The goal is to get businesses, churches, nonprofits, schools, libraries and community members involved in voting. Doing fliers, posters with community people on them, canvassing, attending community events a kind of in your face approach. Hopefully we will be able to go full blast in 2020. Contact me for further information or to get involved.