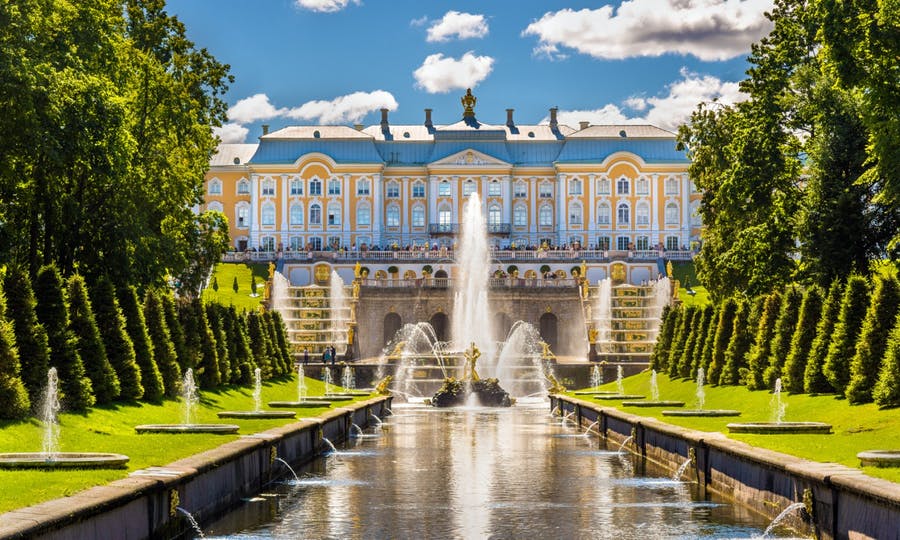 Peterhof Palace, St. Petersburg, Russia — Peter the Great designed Peterhof as his summer palace to imitate Versailles. It is a vast palace of glittering gold cupolas set in a park of fountains beside the Gulf of Finland.

No one becomes an expert in a new country and its culture in a week. As someone who has lived in three foreign countries, Wrongo knows that he barely scratched the surface of those cultures, even after several years in each, and a reasonable facility in the local languages.

With that caveat, here is a hot take on Wrongo’s time in St. Petersburg, Russia. This is a place where Faulkner’s quote; “The past is not dead. It’s not even past” is fully believed. In St. Petersburg, the past is a palpable presence, not simply for tourists who flock to visit the Hermitage, the winter palace of the czars, or Peterhof, the summer palace. The Russians we met all can draw a line from Peter the Great who ruled from 1682 – 1725 through the country’s incarnations as the Soviet Union, to today’s Russian Federation.

After the Bolshevik revolution in 1917, the Hermitage was occupied by the revolutionaries, but a few of the Imperial rooms were left intact. The idea was to allow the proletariat to witness the disgusting materialist way that the former rulers had lived. It turned out that the view into the imperial past was enormously popular with the people, so the authorities decided to close them.

They have now been restored, and the huge art collection established by Catherine the Great is on display, and most of the visitors Wrongo saw were Russian.

The desire of Russians to stay connected with their past is seen most clearly in the herculean efforts to rebuild Peterhof and the Catherine Palace after they were destroyed by the Nazis in 1941. Both were sacked. The Nazis carried off art and other treasure, and burned the buildings a few days after they occupied the territory. Peterhof Park, along with the famous fountains pictured above were devastated. The palaces sat on the front lines until January, 1944, when the Germans withdrew.

Work began immediately to restore the Peterhof, which looked like this: 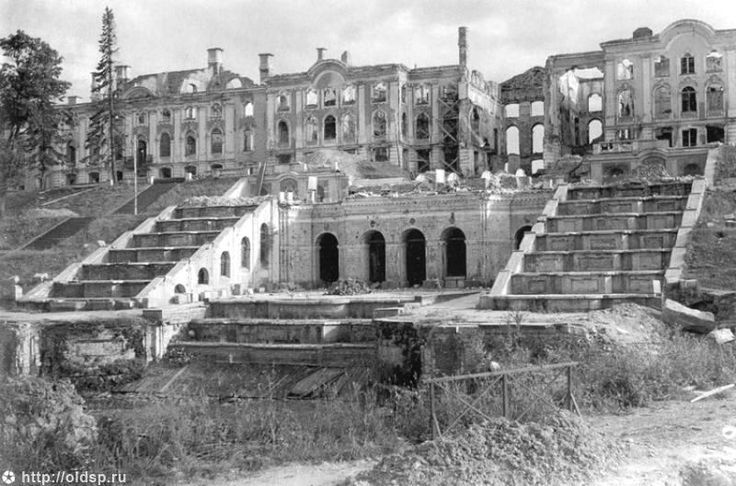 The destruction inflicted on the Peterhof and the Catherine palaces was appalling. It is difficult to see the military necessity in damaging art work, or as happened in the Catherine Palace, using a part of it for horse stables. The priceless “Amber Room” at the Catherine Palace was removed by the Nazis. It has never been found.

It was the Soviets under Stalin that began the work to restore a place that represented everything the Bolsheviks had hated about their past. Repairs to the Hermitage, which had suffered considerable damage during the bombing attacks, started even before the war ended.

It is hard to imagine the strength of will shown by of the citizens of St. Petersburg after the war. The city’s entire infrastructure had been destroyed or damaged during three years of bombing, shelling, and fires. Over a million civilians had died, another million had been evacuated. The 600,000 people who remained began rebuilding their ravaged city and its palaces.

Today, St. Petersburg looks like almost any other wealthy, sophisticated western city. The streets are jam-packed with predominantly foreign cars. There are huge traffic jams. Many high end European retail firms have storefronts in the historic part of the city. Gazprom, the largest firm in Russia, majority-owned by the Russian government, has built an office tower in St. Petersburg that is the largest in Europe.

Most people live in apartments in large tower blocks. The newer apartments sit side-by-side with the so-called “Khrushchev apartments”, built in the immediate post-WWII era. They are low-cost, concrete three-to-five story apartment buildings which were put up to ease a critical housing shortage. After the war, most people were quite happy to have any roof over their heads. Later, the apartments were deeded to the occupants, and subsequently, people were able to sell them and keep the proceeds. Only about 6% of Russians live in collective housing today.

Today, people live in modern, mid-rise apartment buildings like this one: 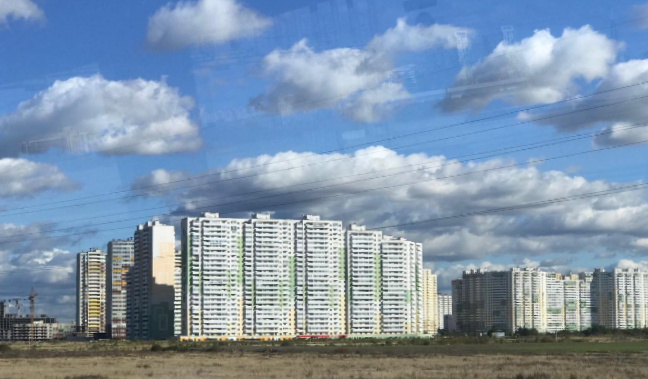 In speaking to our guide, a grandmother, she expressed two concerns that we in the US can easily understand. Her 12-year-old grandson spends most of his time looking at a screen that he holds in his hand. She asked him, and he has no idea who Lenin was. She says that her grandson’s generation only knows the “Lennon” of the Beatles.

So she, who grew up as a child of the Soviet Union and who now is a proud citizen of the Russian Federation, fears that the 300-year history of her home town will be lost.

That the will to suffer to preserve St. Petersburg’s history will be forgotten.

That it may be impossible to regain if necessary in the future.

That the past will merely be dead.