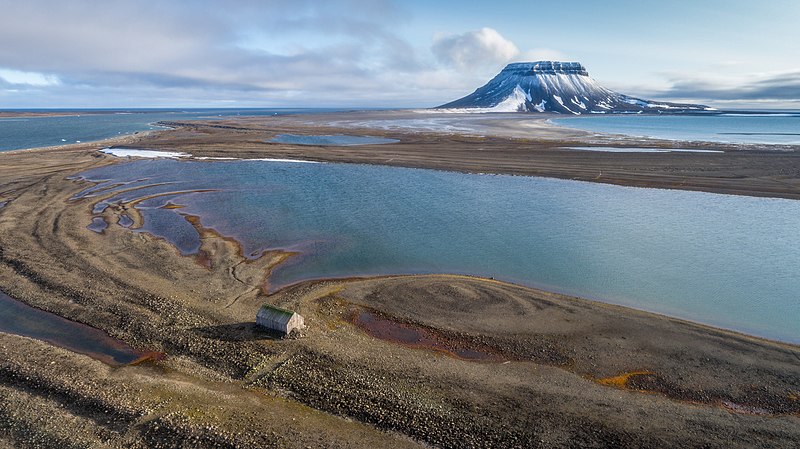 Bell Island, Franz Josef Land with Eira Lodge in foreground. The lodge is a remnant of Benjamin Leigh-Smith’s expedition in 1880 – 2017 photo by Ilya Timin, CC BY-SA 4.0.

The largest gathering of billionaires in the world took place last week at the World Economic Forum’s annual conference in Davos. Vanity Fair reports that they:

“UBS and PwC Billionaires Insights reports show that global billionaire wealth has grown from $3.4 trillion in 2009 to $8.9 trillion in 2017…The fortunes of a dozen 2009 Davos attendees have soared by a combined $175 billion, even as median US household wealth has stagnated…”

And there was this report from Davos in the NYT by Kevin Roose: (emphasis by Wrongo)

“They’ll never admit it in public, but many of your bosses want machines to replace you as soon as possible. I know this because, for the past week, I’ve been mingling with corporate executives at the World Economic Forum’s annual meeting in Davos. And I’ve noticed that their answers to questions about automation depend very much on who is listening.”

Roose goes on to say: (emphasis by Wrongo)

“In public, many executives wring their hands over the negative consequences that artificial intelligence and automation could have for workers. They…talk about the need to provide a safety net for people who lose their jobs as a result of automation.

But in private settings, including meetings with the leaders of the many consulting and technology firms…these executives tell a different story: They are racing to automate their own work forces to stay ahead of the competition, with little regard for the impact on workers.”

“Earlier they [large businesses] had incremental, 5 to 10% goals in reducing their work force. Now they’re saying, ‘Why can’t we do it with 1% percent of the people we have?’”

And American executives have come up with new buzzwords and euphemisms to disguise their intent. Workers aren’t being replaced by machines, they’re being “released” from onerous, repetitive tasks.

A 2017 survey by Deloitte found that 53% of companies had already started to use machines to perform tasks previously done by humans. That figure is expected to climb to 72% by next year. As an example, Terry Gou, the chairman of Foxconn, the Taiwanese electronics manufacturer, who makes iPhones, has said his company plans to replace 80% of its workers with robots in the next five to 10 years.

And Wisconsin just gave Foxconn $4.5 Billion to build a plant and employ 13, 000 workers. Can Wisconsin’s soon-to-be laid-off workers be “re-skilled”, and find employment?

A January 2019 report by the very same World Economic Forum estimates that the 1.37 million workers who are projected to be displaced fully out of their roles in the next decade according to the US BLS, may be reskilled to new viable (similar skill set) and desirable (higher wages) jobs:

“The report shows that, in the US alone, with an overall investment of US$4.7 billion, the private sector could reskill 25% of all workers in disrupted jobs with a positive cost-benefit balance. This means that, even without taking into account any further qualitative factors or the significant indirect societal benefits of reskilling, for 25% of at-risk employees, it would be in the financial interest of a company to take on their reskilling.”

The rest presumably will need to fend for themselves. They will likely rely on your taxpayer dollars to be “reskilled”, or go on government assistance.

The real question isn’t how to stem the tide of automation, it’s inevitable. The question for capitalists and our government is how the financial gains from automation and AI will be distributed, and whether the excess profits corporations reap as a result of layoffs will go in part, to workers, or solely to bigwigs and their shareholders.

Will we create a shared prosperity, or just a greater concentration of wealth?

Time to wake up America! This Fourth Industrial Revolution is underway, and estimates are that it will impact as many as 40% of American workers.

It’s time to understand that the 21st Century American corporation isn’t our friend, as constituted and rewarded. It is the enemy of our society, as they quietly work to eliminate your jobs.

We constantly reduce their taxes. We look the other way when they pollute our environment. We allow them to disproportionately finance our elections.

It’s time for a new Capitalism.

I had to look up Franz Josefland:
Russian archipelago (inhabited only by military personnel) in Arctic Ocean, Barents Sea and Kara Sea, constituting northernmost part of Arkhangelsk Oblast. https://en.m.wikipedia.org/wiki/File:Franz_Josef_Land_location-en.svg

Maybe next year they should have their gathering at the Eira lodge in Franz Josef Land: Russian archipelago in Arctic Ocean, Barents Sea and Kara Sea https://en.m.wikipedia.org/wiki/File:Franz_Josef_Land_location-en.svg. Putin would be glad to accommodate.

Ottho, it isn’t much of a lodge, it is a prefabricated store house that was erected in 1881 to store goods for Leigh-Smith’s expedition, and is likely falling apart.

So,you may be right, it could be perfect for a Davos meeting!