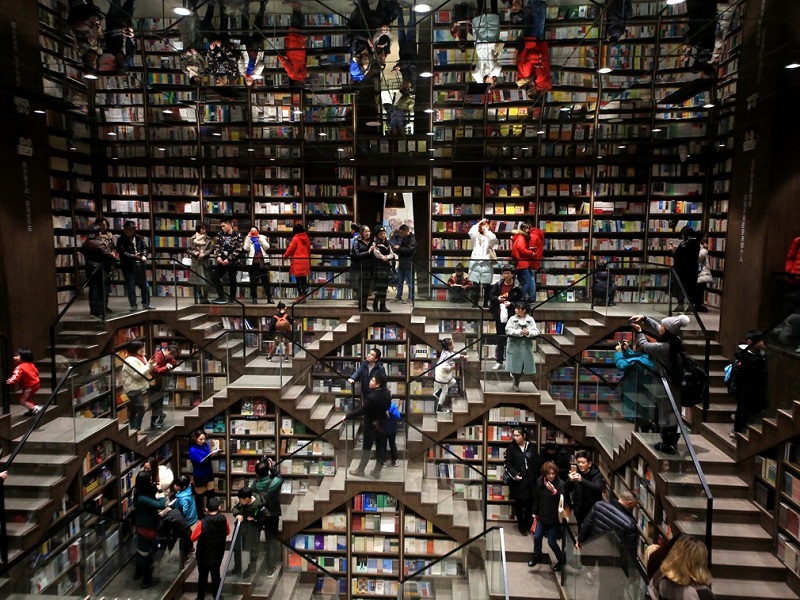 Zhongshuge Bookshop in Chongqing, China. There is a mirrored ceiling that enhances the visual effect of the stairs that might have been inspired by an MC Escher painting.

Under Trump, the executive branch has been policing its own damn self, and that’s working out splendidly! Think Mar-a-Lago’s security. And if Boeing inspecting themselves isn’t bad enough, the Trump administration is outsourcing much of the responsibility for food safety inspections in hog plants to the pork industry.

Trump will cut the number of federal inspectors by about 40%, and will replace them with plant employees. This could make trichinosis great again! From the WaPo (paywalled): (emphasis by Wrongo)

“Under the proposed new inspection system, the responsibility for identifying diseased and contaminated pork would be shared with plant employees, whose training would be at the discretion of plant owners. There would be no limits on slaughter-line speeds.”

This accelerates the Department of Agriculture’s plan to delegate on-site inspections to the livestock industry. It started under Obama, when poultry plant owners were given more power over safety inspections. One difference is that the Obama administration didn’t allow higher line speeds. The Trump administration starting last year, has allowed some poultry plants to increase line speeds.

WaPo says that The Trump administration is working to also shift inspection of beef to plant owners:

”Agriculture Department officials are scheduled next month to discuss the proposed changes with the meat industry. “

If you are a Trump fan, these moves are part of his administration’s plans to reduce regulations that large corporations want totally eliminated.

It’s standard-issue Republican Party pandering to their corporate base. And it’s ongoing, despite the administration coming under fire for delegating aircraft safety oversight responsibilities to Boeing, developer of the 737 Max jets that have crashed twice in the past six months. While FAA certification of the two aircraft involved in the crashes took place under President Trump, the major shift toward delegating key aspects of aviation oversight began under GW Bush.

Letting food producers regulate themselves: What could go wrong? That whole Listeria thing is way overblown, and the spinach growers are sure to guarantee that there’s no E Coli contamination in their produce.

Industry self-regulation is really no regulation at all. There’s only one case where private “regulation” has some teeth: FINRA, the not-for-profit that protects America’s investors by making sure the broker-dealer industry operates fairly and honestly. But, that’s the only example Wrongo can think of.

The real irony in this is that one of the key reasons food recalls have gotten so frequent is the cutbacks in inspections that have been going on for some time. It means that every time something IS discovered, they have to pull everything that went out since the last government inspection.

The longer the time between inspections, the more stuff that has to be pulled off the shelves.

You can be sure that if a pork plant contaminates their meat products and hundreds of people are poisoned, the free market will take care of the poor corporation. How? By letting the corporation declare bankruptcy to avoid paying victims and their next of kin. Then, the law allows them to quietly reorganize under a different business name, and sell more pork.

Of course, maybe a Boeing Max Jet will fall out of the sky, and land on one of these self-inspected pork producers.

Thomas Hobbes, in his “Leviathan”, in 1651, described what life would be without government:

“In such condition, there is no place for industry; because the fruit thereof is uncertain: and consequently no culture of the earth; no navigation, nor use of the commodities that may be imported by sea; no commodious building; no instruments of moving, and removing, such things as require much force; no knowledge of the face of the earth; no account of time; no arts; no letters; no society; and which is worst of all, continual fear, and danger of violent death; and the life of man, solitary, poor, nasty, brutish, and short.”

Yes, but FInra is really a special case. A someone who was licensed until 2017 (i no longer needed the license in my job) I can affirm the Finra really does exist separate from the registered reps who may be life insurance underwriters or financial planners. The training/testing exists entirely separate from the broker/dealers.