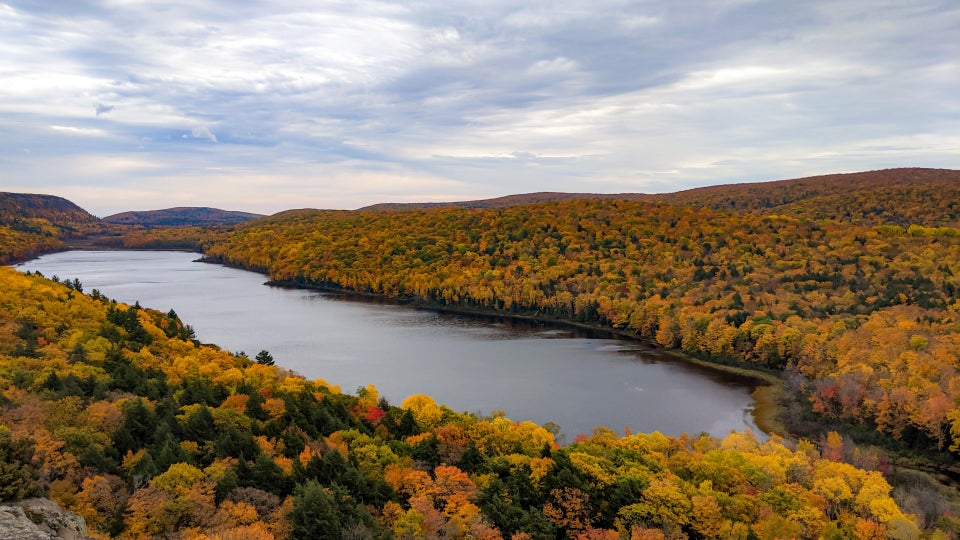 Lake of the Clouds, Michigan – October 2019 photo by kawl

The accepted view in DC is that Trump’s decision to green light Turkey’s Operation Peace Spring against the Peoples’ Protection Units (YPG) in northern Syria benefits US adversaries, including Iran, Russia and Syria.

There are collateral effects. The withdrawal of US forces and its behavior with the Kurds after many years of battles against ISIS helps to confirm Russia’s credibility and commitment towards its Middle East allies. By comparison, Trump’s actions paint the US as an untrustworthy partner.

The US foreign policy establishment and the mainstream American media keep making these arguments. American Neocons are openly complaining. They will blame Trump for “losing Syria.”

Are they correct, and does it matter?

When Trump announced over the weekend that all US troops are pulling out of northern Syria, it immediately led to the Kurds (the group we just abandoned) making a deal with Syria. Various outlets are reporting that the Kurds have made an agreement with Syria, and that Russia will be the guarantor.

This means that the Kurds will become part of the Syrian security forces. The Syrian Army has agreed to take control of all ISIS prisoners, families and those on the run.

According to free-lance Syrian analyst Danny Makki ‏ (@Dannymakkisyria) in a Twitter thread, here are the main points of agreement between the Kurds (SDF) and the Syrian government: (brackets by Wrongo)

1/ The abolishment of the SDF…with all the current Kurdish forces and military groups joining the 5th Corps (Assault Legion) under Russian control 3:12 AM – 14 Oct 2019
2/ A solid guarantee of full Kurdish rights in the new Syrian constitution with autonomy which will be agreed upon by Kurdish leadership & Syrian state.
3/ Joint coordinated effort by Syrian/Kurdish forces to remove Turkish presence in northern Syria including Afrin…
4/ Manbij & Kobani were agreed upon for SAA [Syrian Arab Army] to enter quickly, whilst Hasakeh has seen a wide scale deployment of Syrian troops, this will continue in Qamishli and other joint areas
5/ With Syrian forces now on the border area with Turkey it’s clear that this starts a new phase in the 8-year-long war where some sort of endgame is now taking shape – all border areas and administrational centers will be taken over by the Syrian government
6/ Within one month Kurdish leadership with start to take up some official roles within the current Syrian government to ease the transition period of N. #Syria until an new constitution/government is formed in the future

12/ The agreement thus far is effectively a military one, based on self-defense and mutual interest with a number of set aims. The governance/land delegation/ISIS prisoners part will follow later
13/ Syrian forces will deployed on the entirety of the border with Turkey, this is the first time in 6 years that the Syrian army will have a serious presence in N. East Syria
14/ Although Manbij is one of the cities that the Syrian army would take according to the agreement, the situation there is still tense and it is unclear exactly who will control it.

Russia has been working hard to reach a comprehensive agreement with Turkey and Syria to halt the military operations including for Manbij, as soon as possible.

Syria is now on the way to regaining control over all of its territory, thanks to Russia and to a lesser extent, to Donald Trump. There’s no other way to put it. It appears that all that was needed was an announcement of the US withdrawal to fast track an end of the war in Syria.

It seems like every party is getting what it needed: Trump gets US forces out of Syria. Turkey feared a well-armed and powerful YPG, which was previously supplied and protected by the US. Now that the US is pulling out, Syria won’t allow any YPG attack against Turkey from northeast Syria.

Russia sees the end to their hot war in Syria, and a huge boost in their credibility and reputation in the Middle East. The Kurds won’t get their semi-autonomous Rojava territory, but they will be alive, living in their ancestral lands, and under Damascus’ governance.

But take it from Wrongo, (who has absolutely no respect for him), Trump did the right thing. Maybe its a Republican thing: Reagan got out of Lebanon. Nixon went to China.

Trump’s seeming willingness to work with Putin will ultimately make Syria a better place. Most Syrian refugees could wind up repatriated to a peaceful country.

Putin could not have orchestrated this without Trump’s willingness to buck the US foreign policy elites, the military, and our politicians.

Trump may have done the right thing for the wrong reasons, or he may not have even been aware of this predictable outcome. But we should chalk it up as a victory for the American people.

While I think the result may work out for the Kurds, I see this as making it hard for us to garner the support we once were able to get fairy easily. For example when we went into Iraq in the first Gulf War (the result of mishandled diplomacy – we gave Saddam Hussein a green light) we had loads of allies.

We may not get these again.

And we really do need to protect sea lanes and so on.

i also am not really sure how all this will turn out. Until fighting stops, it will remain chaos.