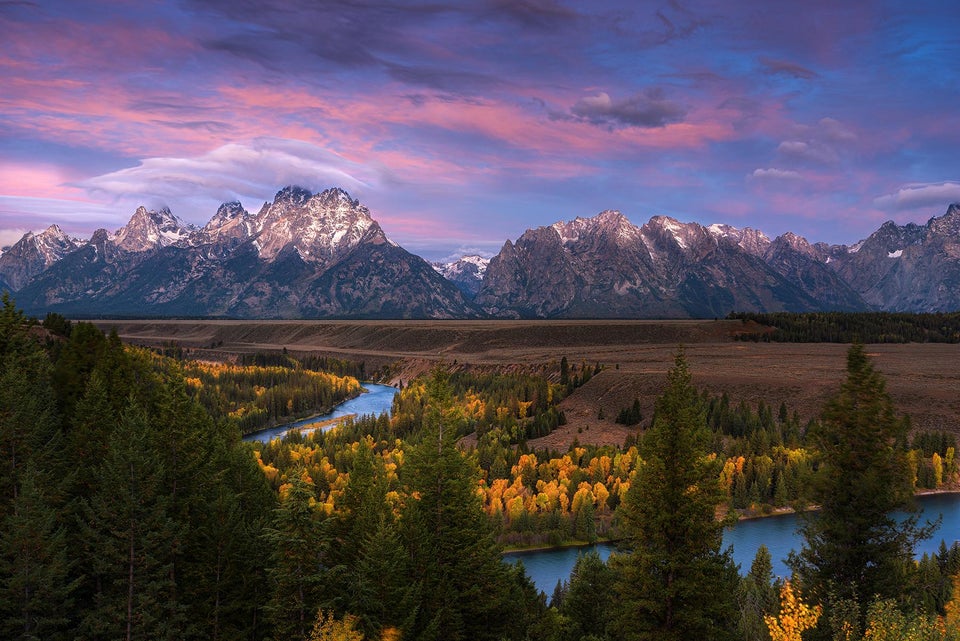 Tetons twilight from Snake River overlook, WY – November 2019 photo by timtamtoosh. Ansel Adams once shot a picture from this spot.

“Serious auto-loan delinquencies – auto loans that are 90 days or more past due – in the third quarter of 2019, after an amazing trajectory, reached a historic high of $62 billion, according to data from the New York Fed today….”

Total outstanding balances of auto loans and leases in Q3, according to the New York Fed, rose to $1.32 trillion. That $62 billion of seriously delinquent loan balances are what auto lenders, particularly those who specialize in subprime auto loans, are now attempting to either get to current status, or to repossess. If they cannot cure the delinquency, they’re hiring specialized companies to repossess the vehicles, which will then be sold at auction. And the repo business is booming!

The difference between the loan balance and the proceeds from the auction, plus all of the costs involved, are what a lender stands to lose on each delinquent loan.

Worse, lenders are still making new subprime loans, and a portion of those loans will also become delinquent, and a smaller portion of them will default. Wolf helpfully adds a chart that shows today’s level of delinquencies as a percentage of the auto loan portfolio is the same as it was in 2009, when we were in the middle of the Great Recession: 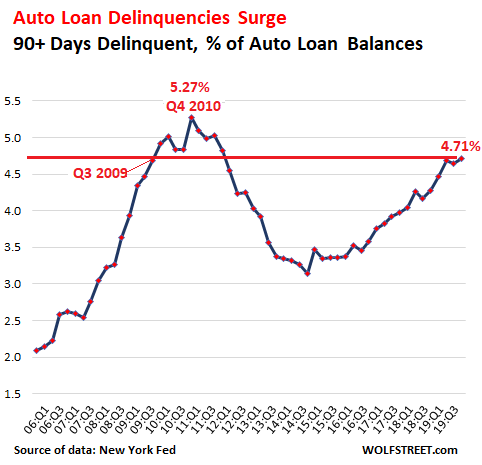 It’s useful to remember that in 2009 and 2010, the US was confronting the worst unemployment crisis since the Great Depression. People were defaulting on their auto loans because they’d lost their jobs. That isn’t the case today, we’re near full employment.

That means that most of the delinquencies are in the subprime category. In fact Wolf says: (emphasis by Wrongo)

“Of the $1.32 trillion in auto loans outstanding, about 22% are subprime, so about $300 billion. Of them roughly, $62 billion are seriously delinquent…around 20% of all subprime loans outstanding.

We know that the subprime delinquencies are not caused by an employment crisis or, by the brutal recession we endured during the 2008 financial crisis. Employment is still growing, and unemployment claims are near historic lows. But subprime auto loans are defaulting at very high rates.

What’s going on? It’s car dealers’ greed. They’re striving to sell more cars. Customers with a subprime credit rating have already been turned down when they try to buy things on credit. But, when they walk on a car lot, their bad credit rating is magically no longer an issue.

The dealers know they’re sitting ducks, who won’t negotiate. They accept the price, the monthly payment, and the trade-in value. They’re just happy to be in a new car. When they drive off the lot, they have a high monthly payment, which, since they already have trouble making ends meet, will soon be late, or in default.

The subprime car buyers really have little choice if they need a car to get to work. Poor people are smart about doing what it takes to survive: If you don’t have a down payment or a good credit rating, and need a car to keep your job, it means a bad deal is better than no deal.

They take the bad deal because if things get worse, they probably will only lose the car.

The kicker is that auto loans aren’t the loan category with the highest delinquencies. Student loans have even higher delinquencies:

The student loans total of about $1.5 trillion, is higher than the $1.32 trillion of auto loans.

The system is broken. Someday soon, the job market will deteriorate. We’ll be back listening to why we should bail out lenders and investors who lend, securitize, and sell these loans to investors who are chasing yeild.