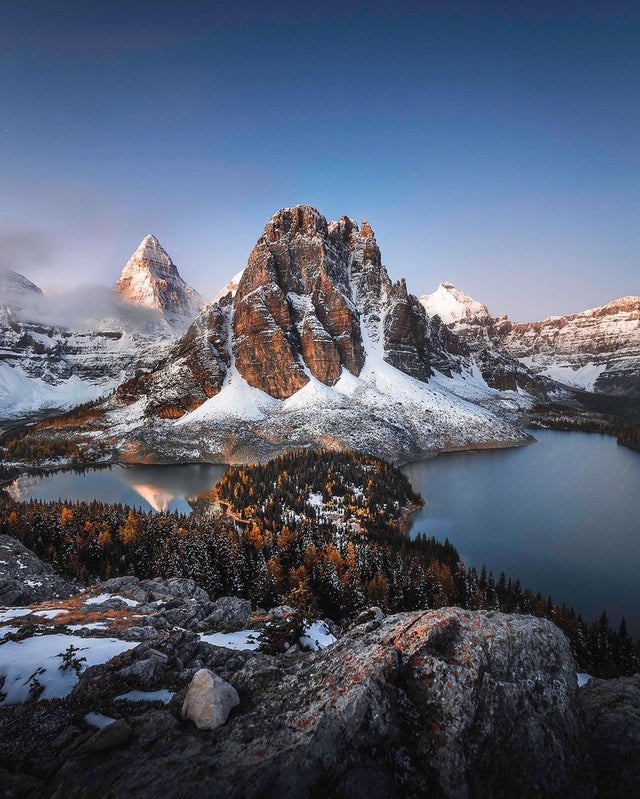 Mt. Assiniboine, Provincial Park, BC, CN – 2019 photo by Talhanazeer. Assiniboine is the pyramid-shaped mountain on the left.

When Wrongo thinks about the Democratic primary candidates, he feels a bit like when he was a breeder of Havanese dogs: “Don’t get too attached to any one of them–we’re only keeping one.”

At the end of the day, we’ll only have one candidate. The question is which is the keeper?

Yesterday we asked: which candidate excited you? Judging by crowd sizes in Iowa, Sanders, Warren and Buttigieg have generated excitement, while Biden has not:

“Mr. Biden has a lot to prove here. I’ve attended some of his town halls and rallies, and they’ve been lackluster, his speeches dull and meandering, and his crowds comparatively small. I’ve been to memorial services that are more exciting. I certainly hope mine is.”

That quote is from Robert Leonard, the news director for the Iowa radio stations KNIA and KRLS. More from Leonard:

“Who is going to get an enthusiastic turnout caucus night? Bernie Sanders will. His support is strong. We’ll see if he can increase it….

Elizabeth Warren has fallen in the polls, but she will have a big turnout caucus night. Her on-the-ground organizing is terrific and her supporters unwavering…..

Pete Buttigieg will also have a big turnout. Watching his several-blocks-long parade of supporters file into the Liberty and Justice Dinner last fall in Des Moines gave me goose bumps…..”

Leonard finishes with this:

“On caucus night, given the soft support I see, if the weather is bad Mr. Biden’s supporters might not come out. It might also depend on what’s on TV….For the other candidates, if their supporters walked outside, slipped on the ice and broke a leg, they still would crawl through snow and ice to caucus.”

He’s alluding to the x-factor, the charisma, the excitement that a candidate creates in voters, and claims that in Iowa at least, Sanders, Warren, and Mayor Pete are showing some of that.

The first thing that most of us want is relief from the Trump assault. In the general election, that starts with telling people the damage assessment, and a plan of repair. The nominee has to say that our government and democracy are in tatters and need to be stitched back together. Constitutional checks and balances have been nearly destroyed by the Republicans.

Maybe we need Medicare for all, free college tuition, and the rest of the progressive agenda, but first, we need to triage our democracy.

To win the presidency, we need to take back Pennsylvania, Michigan and Wisconsin. Are the voters in those three critical swing states ready to sign on to rebuild our social safety net, reform health insurance, and raise taxes on the rich and corporations? Hell yes.

Trump’s 2020 plan is to pump up the Dow while keeping unemployment at historic lows. He’s done that with a $1.5 trillion tax cut without any plan to pay for it. He’ll tout his new “trade deal” with China. He’ll mock and belittle the Democrats and their nominee. Meanwhile, Trump has no health plan at all!

Mitch McConnell’s plan is to make sure Trump is acquitted at all costs, to continue packing the courts, and blocking any meaningful legislation coming out of the House.

What’s the Democratic Party’s 2020 plan? The proposals by the progressive Democratic candidates have merit. Their goals are the right ones for the country and the planet. But, those plans will take several administrations to fully implement. Few voters fully understand the details of how to pay for Medicare for all. Moreover, they absolutely are worried about having their private health insurance taken away. That’s what most Americans have, so that has to be a big concern for Democrats in 2020.

Which of the current flock of Democratic candidates have what it takes to unite and lead the Party to a 2020 victory? Which nominee will have coattails to swing the Senate, hold the House and add to the Party’s roster of statehouses?

The 2020 election will turn on whether individual voters see the Democratic Party’s nominee as a heroic savior of the country, or less of a leader than the execrable Trump.