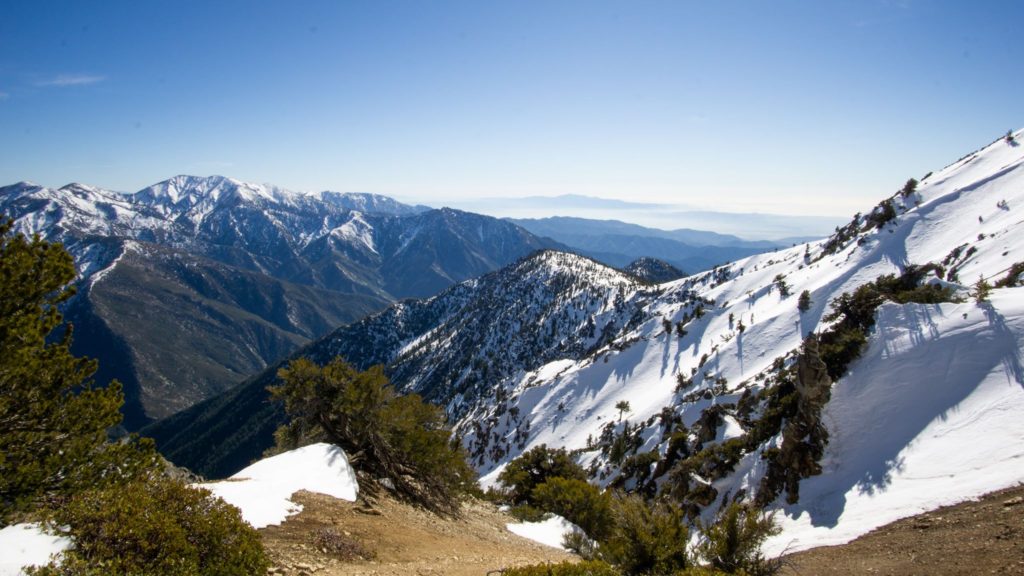 View from the top of Mt. Baden Powell in the Los Angeles National Forest – February 2020 photo by David Dodd

(Sunday cartoons will appear on Monday)

Is the game of investigating Trump over? What are the arguments for continuing to pick at this wound? This is a political calculation only. It no longer matters who said what in Ukraine, regardless of the damage caused by Trump. That ship has sailed.

It’s time to focus on the 2020 election, particularly on the House and Senate races. Focusing on winning those elections, and particularly on holding the House while winning a majority in the Senate, requires that the Democratic Party deal with its current schism. The Party is messily divided between social liberals who are for reform of capitalism along with Medicare for All, and free college, and moderates who wish to tack back towards the middle of the road.

The question that Democrats have to deal with is which of these two poles can make it a majoritarian party in 2020 and beyond?

This dilemma faced the Republicans only a short time ago, when the Tea Party threatened to split the GOP in two. Those cracks remained evident until Trump came along and united them in a way that today makes them seem more like a cult than a political party.

In some ways, Democrats are like the American Whig party was in the early 1850’s, when it could no longer bridge the gap between the Whigs of the northern industrial states and the Whigs of the southern farming/slavery states. It was an irreconcilable dilemma, and in short order, the party simply ceased to exist, only to re-emerge as the Republican Party in 1856.

The Democrats have been trending this way since LBJ forced southern Democrats to vote for/against the Civil Rights Act in 1964 and the Voting Rights Act of 1965. Later, the formation of the Democratic Leadership Council in 1985, founded in part by Bill Clinton, pushed the Democrats rightward.

The “Left Party” that is trying to emerge from the current shambles of the Democratic Party could be more properly defined as a reactionary movement. An attempt to return to the days of the New Deal and the rise of the middle class.

In that sense, Wrongo is a New Deal Reactionary. The New Deal was a good deal for most of us. We should want our New Deal back again.

The question on the table is: Which half of the divided Democratic Party should New Deal Reactionaries support? Is it the Sanders/Warren half, or the Biden/Bloomberg/Buttigieg half of the Party? If it’s Sanders, can we get a New Deal Revival, but no Recreational Socialism to go along with that?

Can the moderate/ConservaDems realistically be counted on to bring back the New Deal? We see that ConservaDems are willing to strap on their running shoes and do 3 miles in the morning, because “no pain no gain”. But somehow, once at work in the House or Senate, they claim that the hardship doesn’t make sense economically, so why even try?

The answers to these twin questions: Whether the Party can be re-united similar to the way Trump united the GOP, and which half of the Party should attempt that unification in November 2020, will determine the arc of our democracy for decades to come.

It was a terrible week, and now we need a break from “all acquittal, all the time”. That means it’s time for our Saturday Soother, a brief window when we can forget about the outside world and concentrate on breathing slowly and relaxing mind and body.

Now, grab a seat by the fire and listen to Anna Netrebko perform “Solveig’s Song” from Peer Gynt’s Suite No.2, live with the Prague Philharmonia conducted by Emmanuel Villaume in 2008:

I see a different and unbridgeable divide, then between the old South and much of the rest of the nation. The old South remains completely at odds with the rest of us. Perhaps we need to re-divide and create two loosely related nations (free trade and travel) but each let the other govern as it wishes.