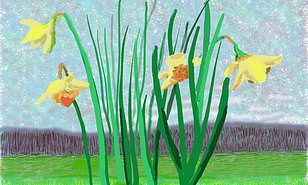 David Hockney (a new painting) — here’s a quote from Hockney: “Do remember they can’t cancel the spring 2020”.

“How do you know if you could be in a third world country? When you go see the Doctor, she greets you wearing a face mask that says ‘made by Mr. Coffee’”.

It is difficult for people to talk about anything else. COVID-19 is on the march, and America isn’t prepared for what’s coming. Worse, we’re unsure if this is a one-two month problem, or something that will last a year or longer. Most countries think that the virus will grow exponentially, and will kill many of their citizens. This leads nearly all governments to order many businesses to close. No one is traveling, except to their local stores. In Connecticut, no one is able to get a haircut for the duration.

But since Wall Street is still open, anyone who owns stocks has taken a huge haircut this week. Friday’s drop leaves Trump looking at a Dow average that’s 3% below what it was when he took office. He’s presided over the worst week in the stock market since 2008.

This market crash is due to investors trying to understand the extent of the damage to the US economy that’s being done by how we’re fighting COVID-19.

In order to save our society over the longer run, we’re actively putting ourselves into a very deep recession. That may mean that people will be out of work for a short, or a long time. If it’s a long fight, that may lead to a very dark economic time for all Americans.

A fundamental question is:

“What unpleasant decisions would our federal and state governments be willing to take to get us out of a deep recession, if the virus is still around a few months from now, and still killing a lot of people?”

Is restoring our economy, and putting Americans back to work worth a million lives lost? Is it worth 300,000?

Those wars have cost the American taxpayers $5.9 trillion since they began in 2001. We’ll easily spend $2 trillion between here and September to prop up the economy while fighting the Cornonavirus.

What kind of sacrifices will we be willing to make if the Coronavirus is still killing Americans on Election Day 2020? Which Party will be saying we should put people back to work?

It’s likely to be both Parties.

Dark, right? There are encouraging signs. Small acts of kindness in supermarkets, artists performing for free on the internet, people trying very hard to avoid making the elderly sick. These are all wonderful things, and we need much, much more of them.

Some say that it takes a common enemy like the Coronavirus to unite us. If we become united in the fight, and stay united once we’re victorious, that would be also be a wonderful thing.

So, let’s take a beat, and think hopeful thoughts about the arrival of spring. Here in northwest Connecticut, the peepers began singing a week ago, and the daffodils are blooming. The first dandelions are peeping through the grass, but we’re expecting snow on Monday. So winter isn’t over just yet.

Let’s try to soothe ourselves by listening to two pieces of spring music. First, “Spring Morning” by Frederick Delius, written around 1888. This is always a Wrongo favorite in spring:

Subtitles in the video are words by Antonio Vivaldi!