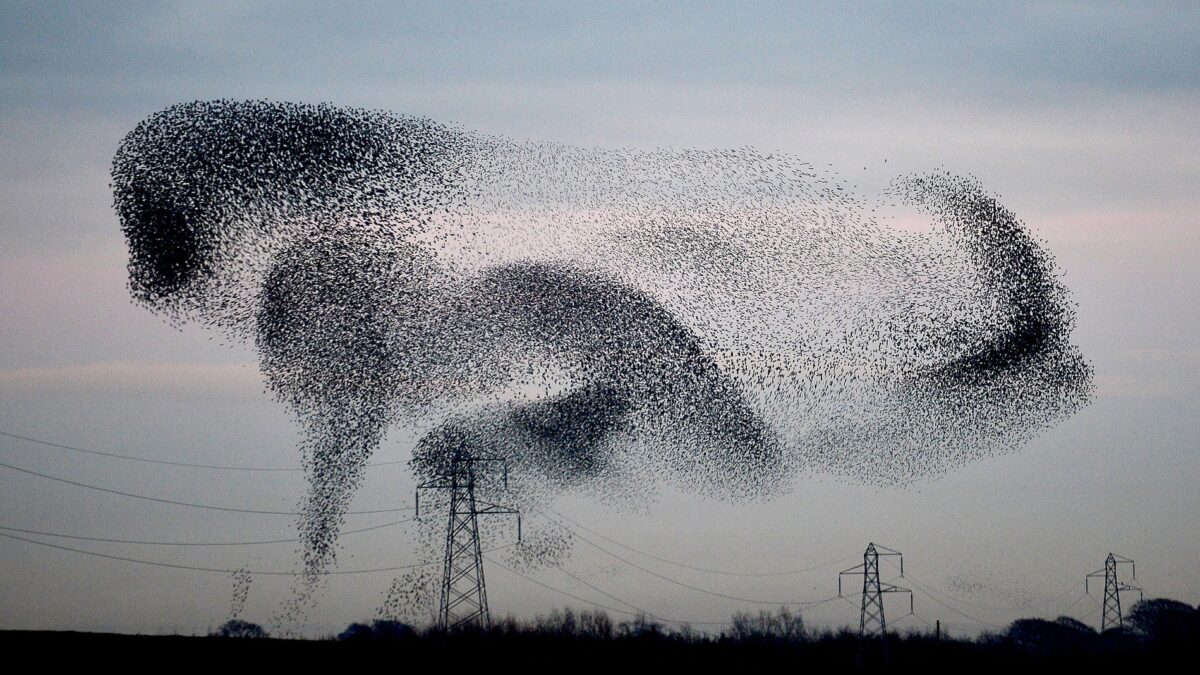 Murmeration of Starlings, Leeuwarden, Netherlands – photo by Marcel van Kammen/Corbis. The changing shape of the flock comes from each bird copying the motions of others around it with extreme rapidity. Their reaction time is less than a tenth of a second.

Are we seeing a kind of political Murmeration in America? You can argue that there is a straight line from what Trump has said and done during the past four years to where we are now:

From The Bulwark: (emphasis by Wrongo)

“Before 2016, when was the last time you saw pitched battles between armed, opposing political forces in America’s streets? Did you see it under Barack Obama? Or George W. Bush? Or Bill Clinton? Or George H.W. Bush? Or Ronald Reagan? Or Jimmy Carter?

….To find the type of mayhem we now have…with armed civilians clashing, you have to go back to the union-busting wars of the early 20th century—and even that’s probably not apt, since those were workers pitted against companies.

Yet, once Donald Trump arrived on the national stage, street fighting became a common feature of American politics.”

And on Saturday night, convoys of out-of-town trucks and SUVs bearing Trump flags rolled into Portland. They rolled through groups of protesters in their vehicles, shooting projectiles and pepper spray into the crowds. In the ensuing violence, one of the far-right Trump supporters was shot and killed.

After the murder, Trump tweeted that the MAGA “protesters” who caravanned into Portland on Saturday night were “Great Patriots!” and later explained why their behavior was understandable:

“The big backlash going on in Portland cannot be unexpected after 95 days of watching and incompetent Mayor admit that he has no idea what he is doing. The people of Portland won’t put up with no safety any longer. The Mayor is a FOOL. Bring in the National Guard! https://t.co/bM6ypak94t

When you see photos of armed guys with US flags and Trump/Pence campaign flags on the back of pickup trucks driving around Portland, it reminds Wrongo of ISIS fighters in their trucks in news photographs or the Middle East. These Trumpers look like militia men, not something we’ve seen in America before.

The strategy in play here is “Let’s you and him fight.” Most Americans aren’t going to play that game, but the way FOX and Trump are stoking the fires, enough may be willing to try violence, starting a quasi-civil war in a few of our cities. And it’s pretty clear that it wouldn’t be contained there, since the Trumpers have the larger arsenals of weapons, and are more willing to use them.

Of course, the Portland murderer should be brought to justice, right along with the underage Kenosha killer. There is no excuse for deadly violence. Now that we have dead in Kenosha and in Portland, vengeance may become nearly impossible to tamp down, particularly in our laissez-faire gun owing society.

The only way to stop this is to bar armed protestors, regardless of their politics, from entering the area of demonstrations. All weapons, not only guns, need to be confiscated, to be returned later, or they can be retained by the owner if they agree to leave the area.

Also curfews must start earlier, and be strictly enforced. All of these efforts at better crowd control means more policing-type resources, but that’s the price of doing business if we are to prevent a possible war on our streets.

Finally, it’s becoming clear that the police will not intervene in whatever violence the pseudo-militias choose to commit. We shouldn’t be surprised at how quickly the Republican’s focus shifted from defending the right-wing underage killer of two protesters in Kenosha, to being outraged at the death of a righty in Portland.

Let’s remember that America is a big country, and while it might seem like violence is everywhere, it’s not. Even in cities that have reported violence, the conflicts are localized, and are not continuous. There are also protests happening in various places in the US which are totally uneventful.

Never forget that the main reason America is in chaos at this moment is because Trump wants it that way.