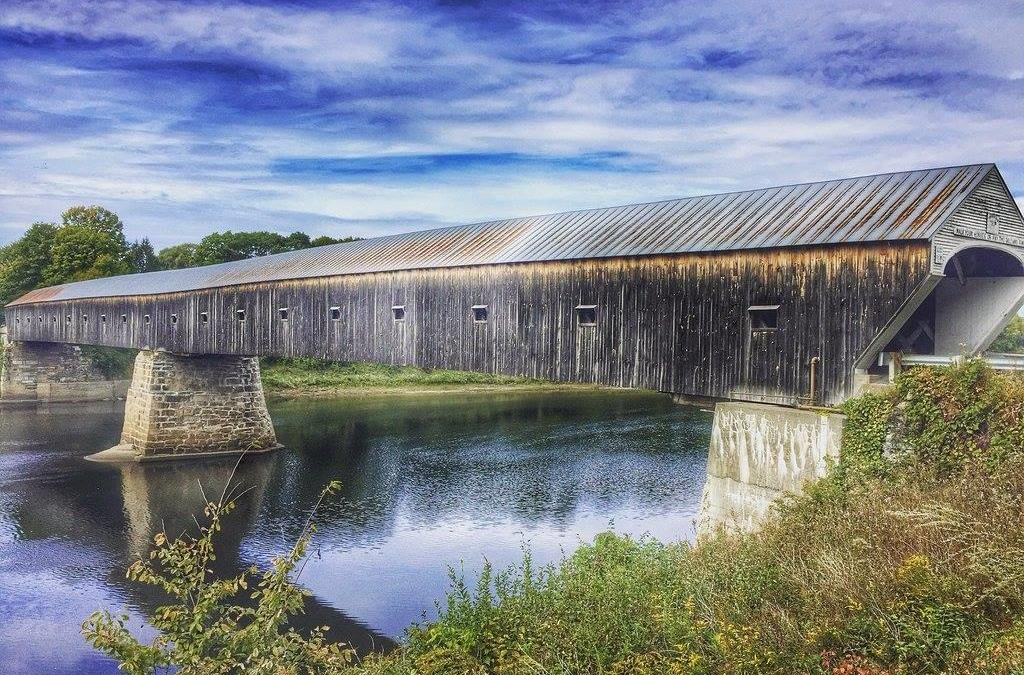 The Cornish-Windsor Covered Bridge that connects Vermont and New Hampshire across the Connecticut River. Wrongo and Ms. Right crossed it many times a year when we lived in NH.

Happy Saturday, fellow disease vectors! Both presidential conventions are over, and there’s just 65 days to go until the election. In his Thursday night acceptance speech, Trump turned and pointed at the White House, saying “We’re here and they’re not.” That sums up what’s going to be all-out, house-to-house fighting for votes by both Parties.

Trump is seeking to redefine the November election as a choice between Biden and himself, not simply a referendum on his first term.

A massive Republican attempt to scramble the narrative has already begun: No one will be safe in Joe Biden’s America. If he wins the election you’ll have to lock your doors, or run for your lives, because those bad people from “Democrat-run cities” want to kill you in your beds.

They’re betting that the fear of violence in the streets will outweigh all of the other issues on the minds of a sufficient number of voters to prevent Biden from winning in the Electoral College.

But the reality is that Trump has done much to incite violence. The fact that the violence has overwhelmingly occurred in cities with Democratic municipal governments is framed as making Trump the “change candidate”, despite being the guy on whose watch all of this violence has happened. And, as presidential counselor Kellyanne Conway explained on Fox News:

“The more chaos and anarchy and vandalism and violence reigns, the better it is for the very clear choice on who’s best on public safety and law and order…”

And facts just don’t matter. Biden isn’t for defunding the police. In reality, he has called for increasing federal funding for police departments by $300 million, while Trump has proposed nearly half-a-billion dollars in cuts to law enforcement funding.

We should have expected the emergence of vigilante violence, as more and more protests turned into riots this summer. But this week’s killings in Kenosha, WI demonstrate how sinister vigilantism is when a 17-year old Kyle Rittenhouse comes from another state, ostensibly to protect local Wisconsin property from local protesters, and kills two.

But he wasn’t alone. NYT reports that: (emphasis by Wrongo)

“Mr. Rittenhouse’s gunfire is mixed in with the sound of at least 16 other gunshots that ring out during this time.”

Apparently, Rittenhouse was responsible for eight of the 24 rounds, so other vigilantes were also roaming Kenosha’s streets. And since he’s 17, Kyle isn’t old enough either to own a gun, or to be open-carrying in Wisconsin, where you can’t legally own a rifle until you’re 18.

Immediately after Rittenhouse was identified as the shooter, the right-wing media characterized his actions as those of a dutiful citizen who had no choice but to take the law into his own hands, more Republican justification of vigilantism.

Returning to the context of the next 65 days: Once again, the big question is whether you are better off today than you were four years ago?

Since life is worse, how and why should voters focus only on violence when there are already 185,000 COVID dead? When 30 million Americans are unemployed? When 50 million face eviction, and our economy is teetering on depression?

There is no question that street violence is a major issue that must be on the table right along with the others. These require simultaneous solutions, and failure to solve any one of them will weaken the country for at least a decade.

They all urgently need to be solved, not spun, and Biden better have good answers.

It is a wonder that we haven’t seen more gun fights on our city streets. The police have all the tools and protective gear money can buy, but they look the other way when it comes to vigilantes. They need to intervene when these open carry vigilantes show up at protests, and bar them from entering into the immediate area of a protest, regardless of the First and Second Amendment consequences. Public safety should override the Constitutional concerns.

Americans can’t walk around afraid of armed and unregulated militias who think they have a mandate. And those militias can’t be welcomed by our local police. That’s the easy part. Solving the COVID pandemic so people can go back to work and to school can’t be left to Trump. He’s proven he isn’t capable of solving those problems.