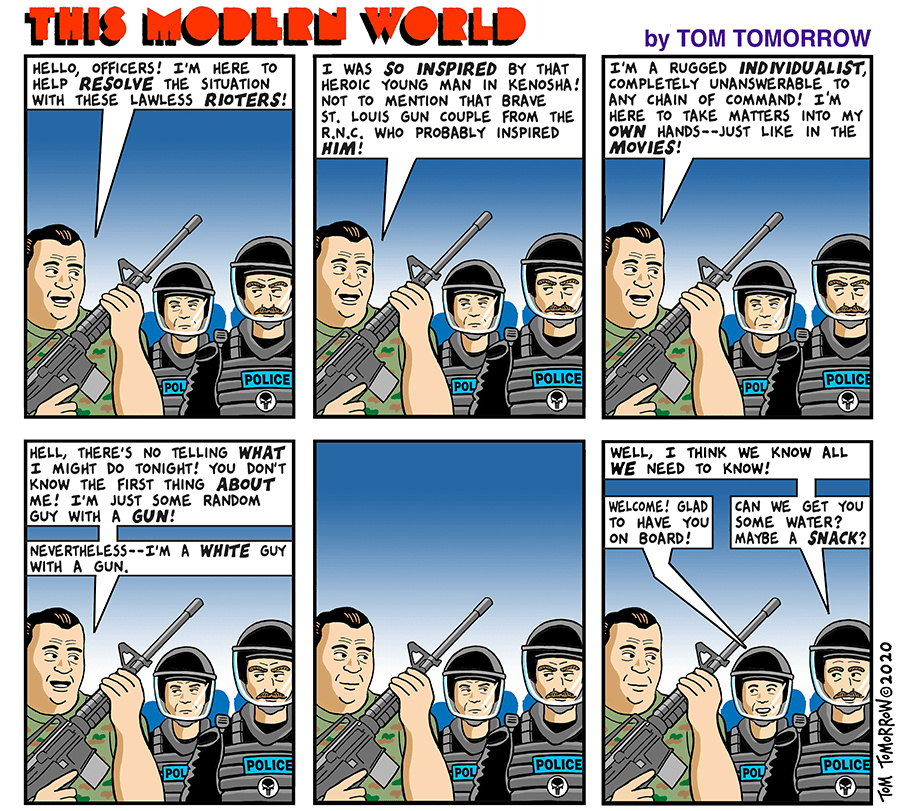 Via Tom Tomorrow. Sadly, this is a documentary, not a cartoon.

Wrongo is writing this on Tuesday before Trump’s road trip to Kenosha. If America is lucky, he’ll have a meet and greet with the awful Kenosha Sheriff, David Beth. He’ll give a stump speech about the need for “law and order”, and complain that Democrats want to defund the police. He’ll promise to send the National Guard into every rioting city. And if Bill Barr had input into the speech, we may even hear about federal charges for rioters.

If we’re unlucky, Trump’s speech will encourage more MAGA/protester confrontations. He could easily praise the militia members vigilantes who showed up in Kenosha, making a tenuous situation worse. That would be the same private “militia” that inspired a 17-year-old with an AR-15, with such tragic results. Trump could throw out a vague promise of future pardons as he has done many times before.

Saying that in front of Kenosha’s police department would be a big win for Trump, it would be red meat for his supporters. But that will not appeal to people who are looking for leadership in the current crisis of anger and civil disobedience in America.

That red meat stuff does work for some elements in our country, not just the MAGA militias and police brutality protesters. There are far right goonies who salivate at the prospect of a post-apocalyptic America. It’s also those media organizations who love covering these night-time “protests that become riots”.

Republicans are painting Biden and Democrats as a mob monolith: From Biden down to the guy throwing a brick at a cop, Republicans are increasingly motivated not to let “those people” win. They’re betting that there are enough people in this country who are more offended by broken windows and burned-out car dealerships than they are by COVID, or racism, or mass unemployment.

In truth, Biden should have visited Kenosha and Portland before Trump. He’s denounced violence in a forceful speech in Pittsburgh (and he’s condemned it previously). So has Harris. Biden needs to keep front and center that there is uniform condemnation of the violence from Democrats.

Whether Biden visits or not, he should stress that every city has the right to a peaceful existence. He should say that the actions of police against the Black community provide justification for those communities to demonstrate, and in extremis, to protect themselves, particularly from outside agitators in the form of faux militias.

Their responses can include peaceful marches, mutual aid, and heaven forfend, the possession of firearms.

That justification doesn’t include violence. And if outside agitators cause protests to routinely turn violent, cities have the right and responsibility to defend themselves, despite the possibility that their defense may cause infringements of First and Second Amendment rights.

There is a sizable element of violent, zealous people for whom there’s no path for discussion or de-escalation. They want a fight. The question is how to deal with them. Force vs. force?

To meet the challenge of outside force, there have to be people who are willing to take on the job of de-escalation. That’s the job of local police. We’re not yet at the point of martial law, and it’s depressing to think that arming the left may be the next option in this looming battle by proxies for both sides.

But people don’t become fighters by owning a weapon. It’s important to remember that the police are us. The protesters are us. We’re all brothers and sisters who shouldn’t want any politician inciting us to attack each other.

It is the job of the police to keep the peace, not to escalate and inflame. The police need to be responsible for de-escalation, and also be held accountable for their behavior in doing so.

We win by creating a society that values and prioritizes community safety, wellness and success. The BLM protests are responsible for some of the violence, but they have also stimulated thinking about steps in the direction of remaking our society into one that values safety and success.

We need to find a way out of this maze, and back to normalcy. Trump won’t show us the way.