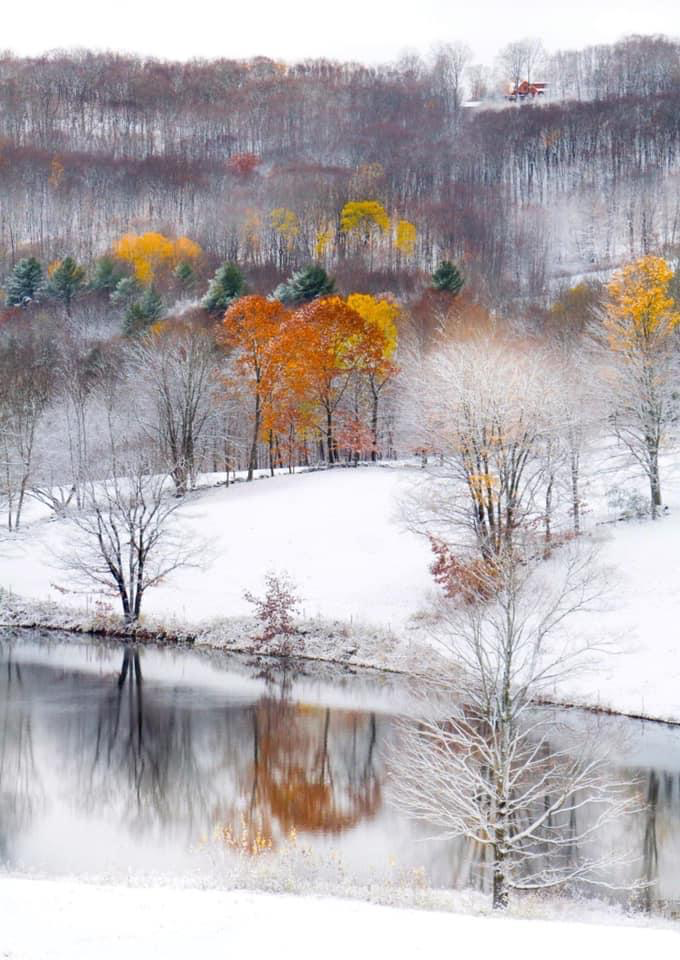 Trump’s 17 minute debacle on our election process reminds Wrongo of FDR’s advice about public speaking: “Be sincere, be brief, be seated“. Trump wasn’t any of them.

If Wrongo was to ask how a specific county voted, giving you the following information, what would you say? This county is 96% Latino, the most Latino county in the US. Its poverty rate is 35% and its unemployment rate is 7.9%. It is also among the poorest counties in the US. Leading up to the election this fall, the county had a surge in Coronavirus cases that overwhelmed its only hospital, a 45 bed facility. 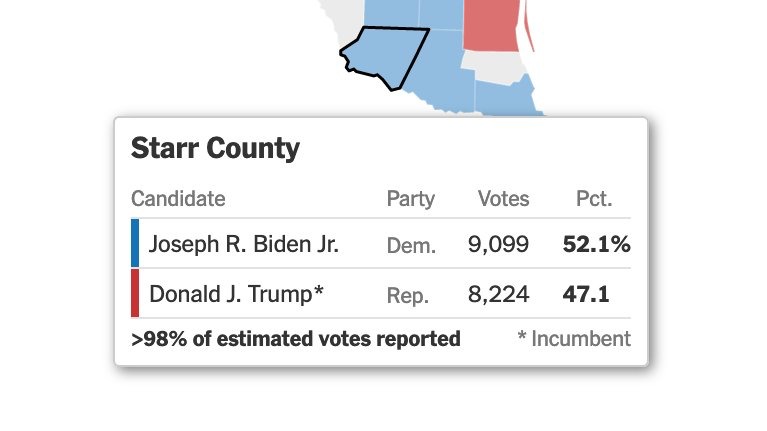 This didn’t escape notice in the local paper, the Valley Central News. They quoted Political Science Professor at the University of Texas Rio Grande Valley, Dr. Natasha Altema, who said that the “defund the police” meme may have cost the Democrats: (Brackets by Wrongo)

Altema also said that local lack of understanding about the Black Lives Matter movement may have also caused a push-back:

“The association of Black Lives Matters with the Democrats would be a turnoff—right? Because of…lack of understanding or misinformation,”

BTW, all local races were won by Democrats.

This was a dramatic swing towards Trump in four years, particularly since this is predominantly a Mexican-American community that lives in a border town. The question has to be: Are we witnessing a dramatic and historic realignment?

This can be broadened to the entire country. Trump underperformed with white men, but made gains with every other demographic. Some 26% of his votes came from nonwhite Americans, the highest percentage for a Republican since 1960. As Matt Taibbi says:

“Trump doubled his support with Black women, moving from 4% in 2016 to 8%, while upping his support among Black men from 13% to 18%. Remember, this was after four years of near-constant denunciations of Trump as not just a racist, but the leader of a literal white supremacist movement…”

Don’t forget, the Democrats nominated exactly the candidate the Party centrists wanted. That didn’t change what Republicans said about him. Biden was the moderate in the race, but Republicans still called him a radical socialist.

The Dems need to make some political changes, or they’ll lose Starr County (and more) next time. But that requires a rethink of its policies toward working Americans to include: Health care, good jobs, safe streets, free education. The main policies supported by the Cultural Left do not look like winners in heartland America.

Finally, it’s bizarre that after all this time, Democrats can’t defend what they believe from the attacks by the Right. Some Dems continue to believe that if they change what they believe, it will change what Republicans say about them. It won’t. Changing to policies that align with what average Americans need may fashion a durable coalition of Rural and Urban voters.

Maybe by the time you read this, Biden will have been (nominally) declared the next President, subject to the legal skirmishes Trump has planned for him. Those legal battles probably won’t start until next week, so try to relax today with our Saturday Soother.

Temperatures will be in the 70’s on the fields of Wrong this weekend. That means that Wrongo will be putting up our deer fencing to protect Ms. Right’s plantings from becoming deer food when cold winter arrives.

We will try to de-stress from the election season, along with everyone else. To get us off to a good start, listen to the late Bob Marley’s “Redemption Song” performed live by Eddie Vetter and Beyoncé in 2015 at the Global Citizen Festival. This performance includes a short part of a speech by Nelson Mandela. The song is more important now than ever:

I suggest that Democrats can’t control what Republicans say about them for 2 reasons. The first is that many voters simply avoid real news – rely on Fox or worse. But then there is the problem of how to avoid turning off any constituency, and they have several. So from BLM, to LBGTQ to Environmentalists to whatever, Democrats can easily turn off one portion of the pool of those who vote Democrats.

2 examples of the problem. One is a colleague of my son who is very leftist and hates Trump but refused to vote for Biden. Then there is a black friend of my brother’s who asks what have Democrats done for him. As to the first – there is little to say to someone who is waiting for the perfect candidate. For the second, we have see a Republican effort to cut back on items from Snap to Medicaid both directly and indirectly (by mandating drug testing and work requirements) so it is only Democrats who are defending programs that help those who are hard up. And then we have policing. The Obama administration tried to get police departments to agree to better police practices re mistreatment of blacks but once Trump was in his AG ended them. Yet blacks voting for Trump increased.

If all you talk about it tax cuts and having a large military, then it is easy. But if you want to help, it is hard – you have many who want you to do something and get mad when you don’t.

I see little Democrats can do to get people to understand what they are about. Even the effectiveness of Democratic official during COVID only made the Trumper even angrier and more ready to vote.

@ Terry: Well said. Agree that the two problems are: slanted, biased news and the Dem’s fear of losing part of their coalition. OTOH, the coalition is being chipped away: both Latinos and Black voters moved in significant numbers to Trump. He also doubled his share of LBGTQ voters to 28%. So despite supporting a laundry list of Economic and Cultural policies designed to appeal to all segments of the coalition, the Dems have lost market share. It’s past time they admit that they have a marketing problem. Their messaging isn’t as effective as it must be to bring change to the US. You’re correct about the GOP’s messaging. They focus on the simple, not the complex. The GOP’s cultural issues are largely understood, they don’t make a big deal about them on the campaign trail. This is a big topic that I expect to talk about over the next week, and I’d love your input.

Republicans have an entire marketing arm, in Fox and right wing radio so that takes care of large numbers of voters, but even forgetting that, how do you counter the story that Democrats sold out the worker. They did not. I once processed group insurance death claims and watched as a series of organizations disappeared. So TRW, once a collection of machine shops along the great lakes was whittled down to nothing. The process that is responsible was the endless change that happens in a free economy, so the same process that moved us from muzzle loaders to breech loaders to magazine feed rifles also has robots doing painting and welding in an auto plant.

The Reagan era was the era when the balance tipped – some of it because unions lost the support of the department of labor. So in 1992 when Bill Clinton told workers that jobs were not coming back, he was telling them a truth. But now the story is told almost as if it was Bill who destroyed the jobs. (A similar story is told of HRC and coal).

The complex story is the whatever safety net exists is opposed tooth and nail by Republicans and Democrats are doing their best to hold on. The Medicaid that exists to pay for the medical care for drug addicted mid western laborers is a Democratic program. Dems would love to try more – so pay for day care for shift workers and college so the next generation has some hope, but you cannot make a meme about this.

I am much discouraged.