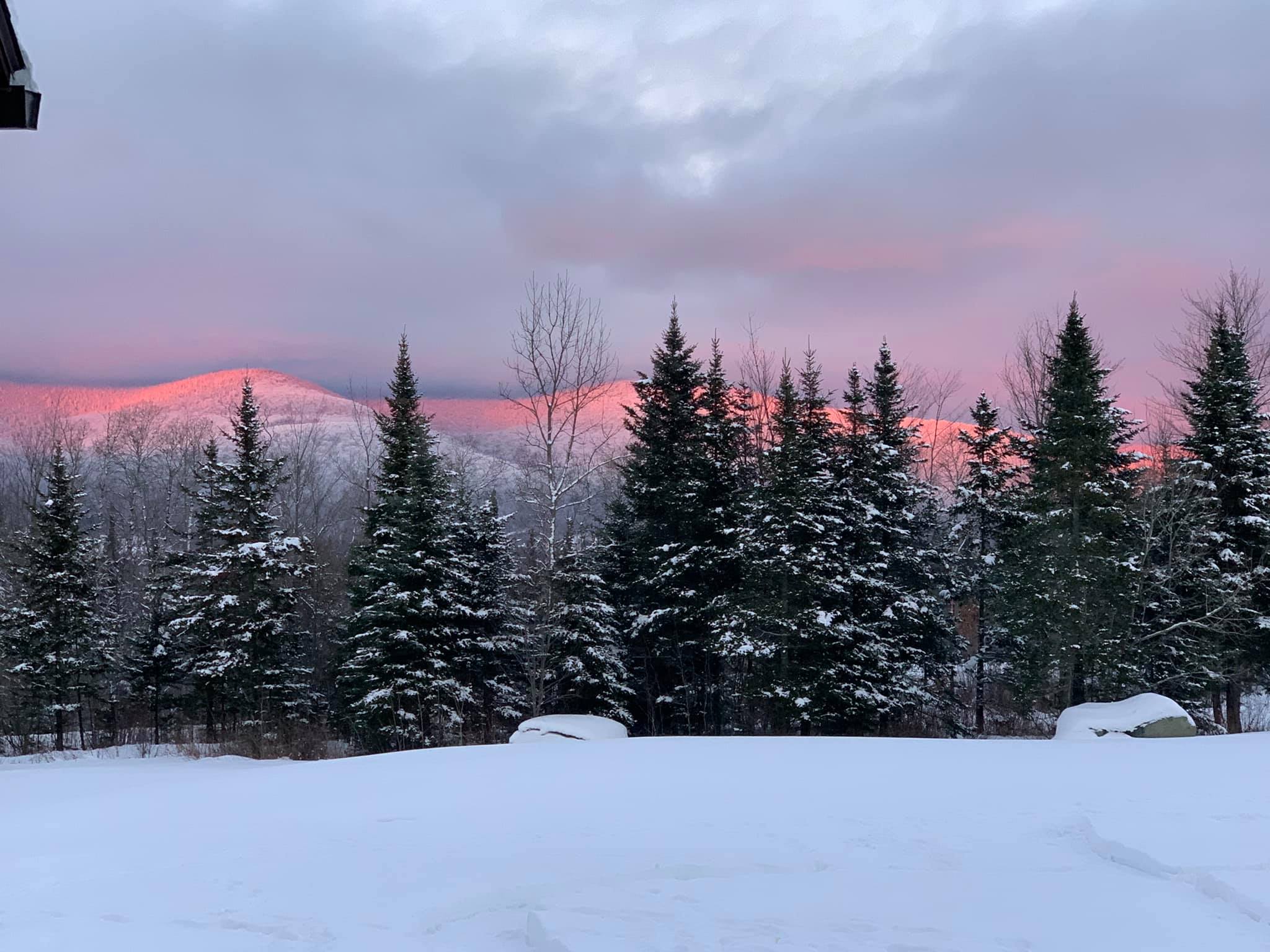 “This analysis suggests that they look like the folks who the rest of us see at the grocery store, gas pump or PTA meeting (especially if we live in a county where Trump scored 40-60 % of the vote). Not “those people,” but “our people”…..neighbors.”

Following up on the idea that these are our neighbors, Political Violence at a Glance (PVG) says that we should be focusing on movements not groups. Movements are often the lifeblood of militant groups, but the groups often die out before the movements. The movement can remain, inspiring both groups and individuals to act on their own.

And PVG says that recent violence in the US has tended to come more from individuals linked to broader movements.

Does this compute with what we saw at the Capitol? We learned that only 10% of the rioters were members of militias or militant groups. That means 90% were as David P. says, our neighbors, albeit our right-wing neighbors.

Let’s link this idea up with the findings of a new poll by the conservative American Enterprise Institute (AEI). The AEI conducted a survey of 2,016 US adults between Jan. 21 and Jan. 30. They found that politically motivated violence has the support of a significant share of the US public: (emphasis by Wrongo)

“….nearly three in 10 Americans, including 39% of Republicans, agreed that, “If elected leaders will not protect America, the people must do it themselves, even if it requires violent actions.”

The use of violence has more support among Republicans than Democrats. Only 17% of Democrats support taking violent action along with 31% of Independents. Here are more findings: 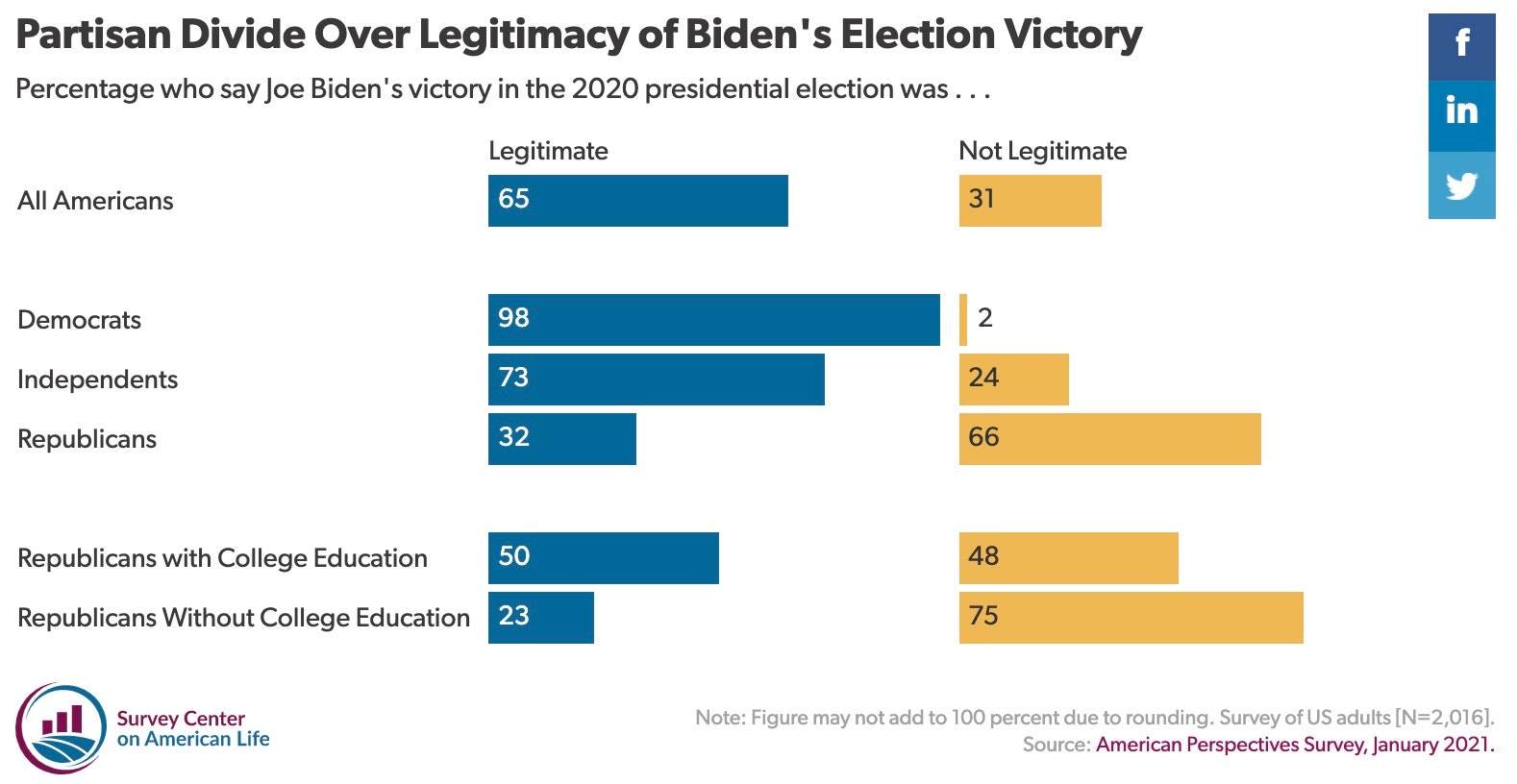 The AEI poll shows us that Republicans have become a fringe group of extremists, embracing conspiracy theories that support their basic world view that everyone is against them. Their worldview persists even when it’s clear that our political system is heavily stacked in favor of conservative white people: The Senate, the federal courts, Republican gerrymandering of state legislatures, and the most-viewed media.

So, how are these sentiments playing in the show trial happening in the US Senate? This is the oath that each Senator took:

“I solemnly swear that in all things appertaining to the trial of the impeachment of Donald J. Trump, now pending, I will do impartial justice according to the Constitution and laws: so help me God.”

So far, the evidence to convict in the trial is overwhelming, but it’s certain that the Senate won’t convict Trump. This is because many of these so-called “impartial” jurors acted throughout the post-election period as accomplices to Trump’s Big Lie about the election. They have no defense. There is only complicity, whether motivated by their fear of their base, or by sharing in the conspiracy

And the House managers have forced every Republican Senator to feel that complicity. The Republicans reflect what the AEI poll shows about their constituents. They are now a Party largely defined by conspiracy theories and irrationality.

The Senators sitting as jurors are facing this choice: 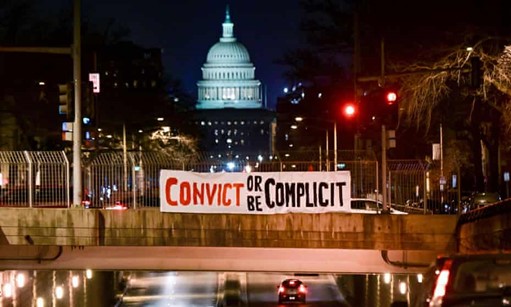 Photo by Erin Scott for Reuters

JFK’s 1956 book “Profiles in Courage” was only 272 pages, mostly because political courage is rare. Politicians want to be re-elected, so they have no intention of convicting Trump. They will be complicit in his effort at sedition. But they must be confronted; they can’t be let off the hook.

After Trump is exonerated, each Republican Senator must face an uphill fight to win reelection. This cannot be dropped down the memory hole.

Republicans won’t voluntarily morph into a responsible governing force simply by walking away from Trump. Think about those white male voters who didn’t get beyond high school: They prefer conspiracy and violence against their enemies.

Will Republicans confront the truth about these people? You know, their neighbors and our neighbors, or will they continue to surrender to them?

That any more than a tiny minority think that Biden was not legitimately elected means we are in far more trouble than we imagine. Right wing media have constructed a parallel universe in concert with Republicans such that governing is now impossible – meaning that very little can be passed except under the umbrella of passing a budget. Not because most people don’t want it (name the idea) but because a minority can stop it. Our Founders were worried about the tyranny of the mob – but our electoral college and senate have given us the tyranny of a minority (a large one but still a minority).

I know 2 Trumpers. One is my sister who married a wealthy man (family owned a chemical factory). She has taken on the views of those who sole concern is to lower taxes, even though our mother (a widow for the last 30 years of her life) depended upon tax paid benefits to get by. She had Social Security but needed help paying for prescription drugs. The second is a CVP where I work who probably has family income of $300k plus and goes on skiing trips etc. She too lives in a right wing bubble and so re Obama she expressed frustration that Obama does not bring up his white mother (something that is not true).

They both are angry at liberals and their frustration belies their easy lives. Both can buy a home any time they want and travel when they wants as well.

The anger has been programmed.