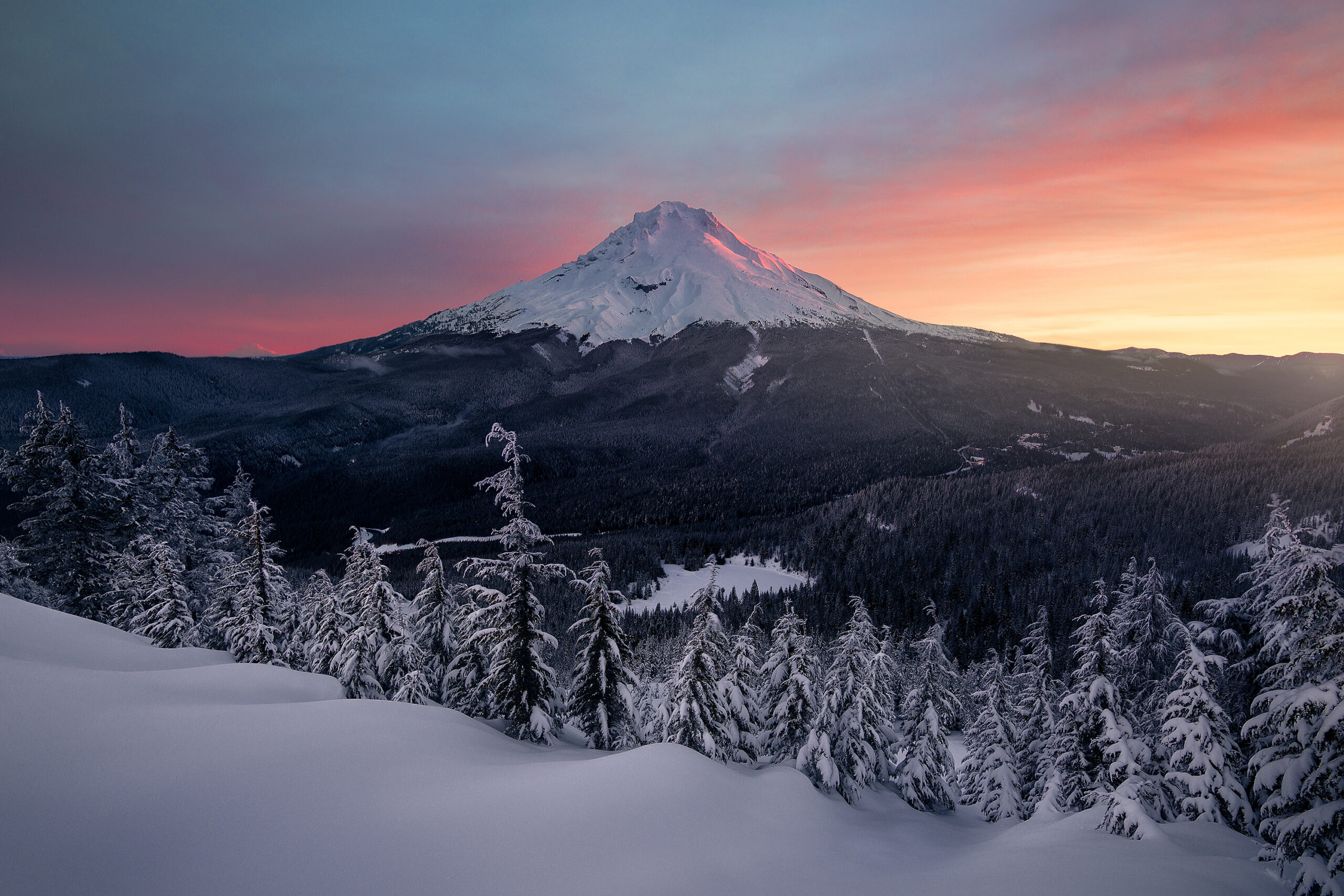 Sunrise, Mt. Hood, OR – 2021 photo by debuggerfly. The “smile” on Mt. Hood is called the Mississippi head wall.

The MAGA movement isn’t going away. Even if Trump’s political strength fades, the MAGAs are strong enough to remain a toxic element in our politics. Chris Parker at the University of Washington, along with Rachel Blum of the University of Oklahoma, have conducted what may be the first comprehensive national survey of MAGA supporters.

They surveyed about 1,500 self-identified MAGA members in December 2020 to try to better understand them. This wasn’t a poll, but an in-depth survey of MAGA attitudes. The study participants were found based on their MAGA activity on Facebook. Interestingly, the numbers are huge: They found 6,610,370 Facebook users self-identify as MAGA.

They are well-represented throughout the country, and their numbers correlate with population density. Less populous states have fewer members. This shows that MAGA presence is not limited to rural areas. In most states, MAGA respondents were clustered around major cities like Atlanta, Chicago, Dallas, LA and New York.

After the Capitol riot, a subset of the group was re-interviewed specifically about that event. That questioning wrapped up around the end of January. It seems that to the MAGAs, there’s an alternate universe where the Trump coup didn’t happen:

In other words, it wasn’t Trump’s fault, so they don’t think Trump deserves any punishment or criticism for what happened.

And a new national poll released on Feb. 11, the American Perspectives survey of 2,016 adults, found that half of GOP voters nationwide agreed with this statement: “Antifa…was mostly responsible for the violence that happened in the riots at the US Capitol.” That’s an astounding level of delusion. It makes crystal clear how and why so many Republican politicians could end up looking the other way at an anti-democratic insurrection that killed five people.

The Parker/Rubin study found that MAGA members are not demographically diverse:

Roughly 85% of MAGA supporters are members of gun-rights groups. Approximately 60% are members of pro-police groups. In addition, 50% belong to anti-lockdown and pro-life groups. Significantly, only 38% of the MAGA movement identify with the “Stop the Steal” campaign, and only 23% identify with militia movements of any kind.

So what IS driving the MAGA movement? Parker and Blum ask: if they want to Make America Great Again, what’s wrong with America? They started with questions about racial resentment:

Note that 90% disagreed with whether “slavery and discrimination make it difficult for Blacks to work their way up,” and whether “Blacks have gotten less than they deserve”. A lot of their response seems to boil down to “I don’t want those people doing better than me.” What seems true is that resentment over possibly losing status is the driving force behind Trumpism.

What about views on immigrants and women?

Parker and Blum asked a series of questions about political activism. At least 50% have signed a petition, contacted a representative, participated in a boycott, or donated funds to a campaign. Roughly 45% attended a political meeting, 35% have attended a rally, and 30% have volunteered for a campaign.

Approximately 90% of MAGA supporters self-identify as Republicans, or lean GOP, the rest saying that they are independents. Importantly to Trump’s Big Lie, they found that 90% of the MAGA movement disagreed with making it easier for people to vote: 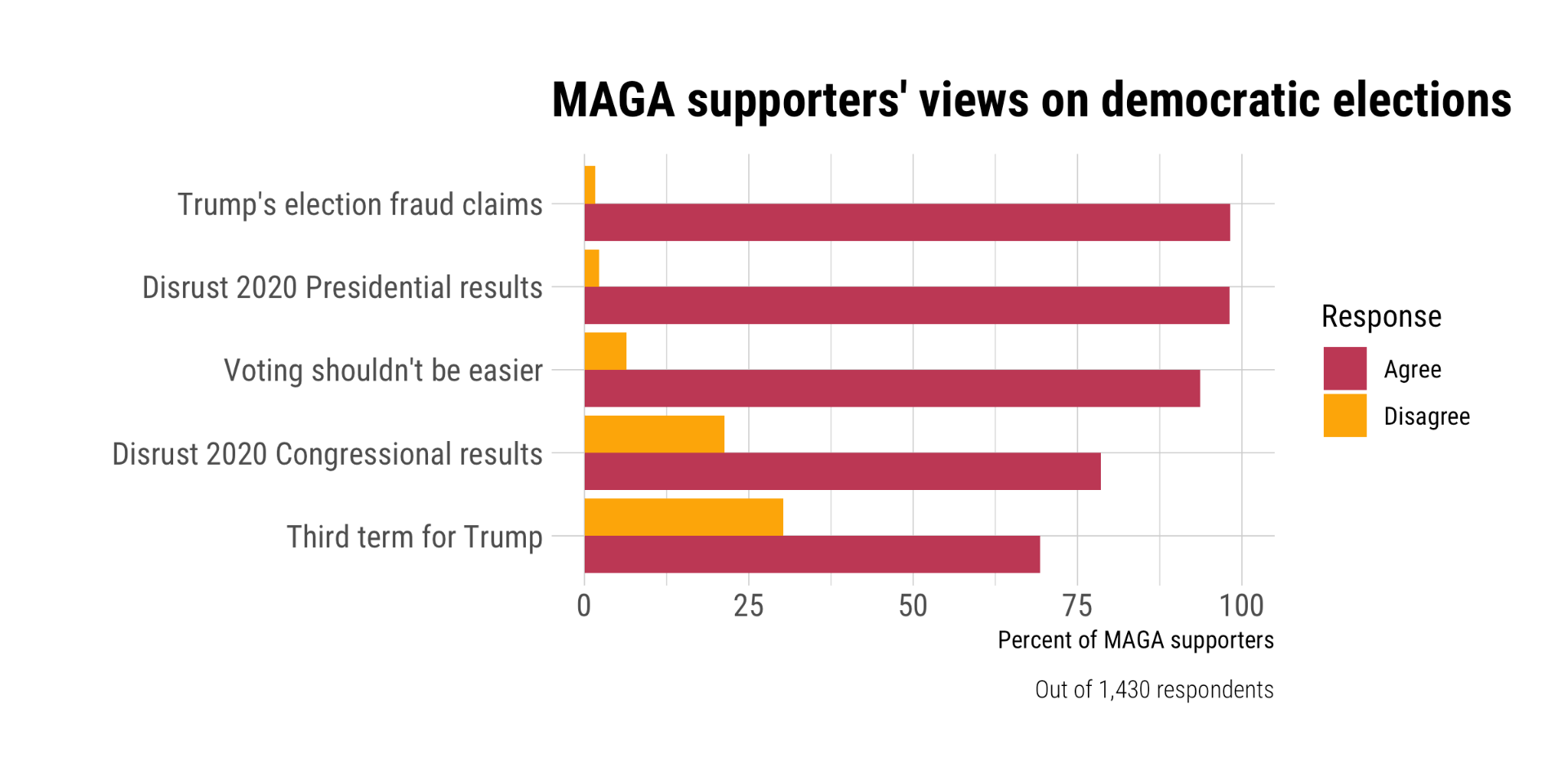 Based on this survey, these MAGA loyalists do not believe in democracy. They are a threat to our country and will be a threat for many years to come. The GOP can’t let Trump go, because doing so would mean losing the MAGA vote, and the GOP needs each one of them in order to hold on to power.

This is why we should disregard the rosy comments that: “Our democracy was tested and survived! The system worked!”

Every Republican needs to be asked two simple questions:

The answers are one word each: “Biden” and “yes.” If they can’t answer correctly, they are an enemy of democracy.

The key as I see it is right wing media and the Republicans themselves who are completely untethered from facts. They say what they do to win an audience or stay in power.

So it is that Fox et al are claiming that the Texas power problem is caused by green energy. And the who should be informing or leading are selling the lie that the election was stolen.

The rest of us can’t reach the MAGA heads.

…. we continue to see articles that scold the rest of us for our harsh views of the MAGA crowd. But what do they deserve but scorn?

1. Anyone who believes that Trump lost because the election was stolen is an enemy of democracy (and thus a friend of authoritarianism), whether they realize it or not). It is cognitive dissonance and dishonesty. People are prone to believe what they want to believe. Be careful what you wish for because Trump in his “heart” only favors wealthy Trumpists.

2. It is indeed extremely valuable to understand objectively (i.e. without passing judgment) what drives Trumpism. A large part is people being resenting the woke / PC culture, being looked down on, lectured or shamed by liberals. That’s what gave Trump the edge in 2016.

3. I believe that fear of losing status / resentment about having lost it, including economic status (relative to those to whom they feel superior or more entitled) is an important driver or contributor. It is precisely what Trump played on with skill. Not sure if it can be said that it is THE driving force. The drivers are intermingled, overlapping.