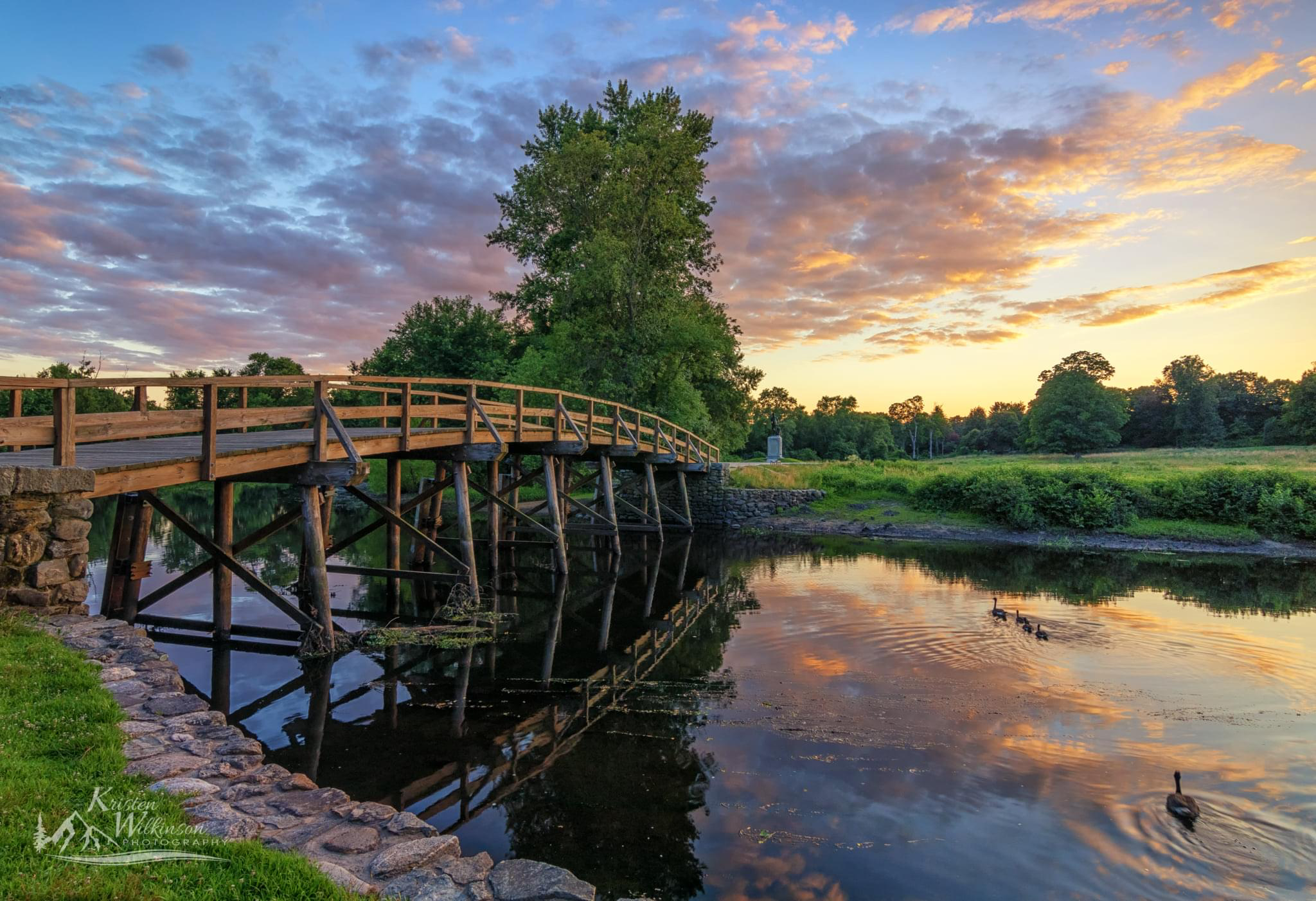 Sunset at Old North Bridge, Concord, MA  – 2019 Photo by Kristen Wilkinson photography. Old North Bridge is where in April 1775, 400 American colonists engaged 90 British Army troops, routing them. The current bridge is a replica of the bridge that stood at the time of the 1775 battle.

Sorry for the long break.

Anyone else have the feeling that we’re in the beginning stages of a third revolution in America? Take a look at what’s happening in Republican-controlled state legislatures.

Arizona has outsourced an audit of its 2020 presidential vote in Maricopa county to a firm called Cyber Ninjas, a Florida company with no history in voting audits. One of the people helping coordinate the audit is John Brakey, who explained one of the tests that was being conducted as part of the review process:

“There’s accusations that 40,000 ballots were flown into Arizona and…stuffed into the box…And it came from the southeast part of the world….And what they’re doing is to find out if there’s bamboo in the paper…[because] they use bamboo in their paper processing…in southeast Asia.”

Thus, democracy hangs by a thread, possibly made of bamboo. But their audit isn’t about bamboo, it’s about bamboozling their base. It’s about keeping the contributions flowing and the outrage boiling. This speaks to a larger and growing problem. From The Bulwark: (brackets by Wrongo)

“Political sorting has created a country in which even local elections are highly polarized. In practice this means that divided government…[isn’t common]…even at the state legislative level. Forty-seven states have both branches of the legislature controlled by the same party….Of these, Republicans overwhelmingly dominate—meaning either complete control of both branches or veto-proof legislative majorities with a Democratic governor—in 25 states, giving party leaders carte blanche to set the agenda and pass bills.”

It’s been six months since the 2020 presidential election, and Trump’s lies about the election continue to corrode our democracy. Unfortunately, his lie is now a litmus test for Republicans. Republicans who spoke out against Trump’s lies are facing consequences as the Party coalesces around the former guy.

In the House, Rep. Liz Cheney (R-WY) is expected to be forced out of her leadership post because she called Trump a liar. The House GOP members will stand against her and behind Rep. Kevin McCarthy (R-CA). Why the unanimity? Because the House is different from the Senate.

McCarthy has 212 members who say to him, “your number one job is to get me re-elected,” while in the Senate, every senator is an island and has six years to reassure their voters that they’re ok with Trump, despite not all acting like his buddy. House members don’t run statewide. They only run for two-year terms, so they’re much more vulnerable to primary challenges.

The belief that the 2020 election was stolen isn’t amenable to fact-checking. The assertion of fraud has become an ideological statement that political opposition to the Republican Party and to Donald Trump is illegitimate. To oppose Trump is to be The Enemy, and The Enemy has surrendered any claim to fundamental political rights.

To paraphrase Norm from Cheers: “It’s a dog-eat-dog world and Democrats are wearing Milkbone underpants.”

We shouldn’t be surprised that most Republicans believe that the election was stolen. A majority of them believed the Obama birther lies. They believed Hillary killed Vince Foster. They believed giving tax breaks to the rich would “trickle down” to the rest of us. Most of them believe that universal health care, public day care, and free college will make America a communist state.

Biden has tumbled to the fact that he won’t be able to cut deals with the GOP. On Wednesday, he offered his least confident assessment:

“I don’t understand the Republicans.”

He now faces a basic question: What if Republicans have changed so fundamentally that they’ve become a rogue Party? The answer is, they have. So, what does that mean for Biden’s presidency? And for our democracy?

Enough, it’s time for our Saturday Soother. Time to get near a window and breathe in the pollen-soaked air in the Northeast. Our delicate fruit trees have made their annual journey outside for the summer, and the vegetable garden is planted. Now, like America, we await good results.

To help take your mind off how precipitously things have changed, spend a few minutes listening to “Kashmir”, by Led Zeppelin, in a symphonic cover version recorded live at the Epic Symphonic Rock show in Lima Peru in February 2018. The cello soloist is Ghislaine Valdivia. This is a real treat and a must watch:

One of the more dangerous notions out and about today is that one can do ones own “research” – which generally means locating a web article or two that gives an easy answer that matches ones own prejudices.

This notion informs the curious Arizona audit. As someone who has spent decades now reading about US history and politics, I continue to wonder that those who believe a steal happened can’t work out what a steal would entail. Meaning that it would take coordination across the US, so in many states. Can anyone really believe the China was shipping tons of fake ballots to perhaps 15 states, that these ballots were designed to fool vote counters (so had correct US addresses, post marks on the envelopes etc) and during COVID, no one noticed? Not one postal worker or truck driver?

And that the fake ballots matched each state’s paperwork exactly? (I work in insurance and can guarantee that as soon as I see a form – let’s say an insurance exam – I can see immediately that it is from another company, not ours – surely vote counters would detect fake forms.)

Oh – and the steal was meant to benefit Democrats but only at the top of the ticket, not for the House and Senate?

The gullibility is astounding.