On June 8, the Senate passed a major industrial policy bill that would direct government investment toward critical technological sectors. The bill is intended to reinvigorate the manufacturing segment of the US technology sector, providing alternatives to supply chains dependent on Chinese microchips. Some argue that it also lays the foundation for long-term economic and technological competition with China. The bill passed with a filibuster-proof 68 votes.

The debate over industrial policy is politically charged because it goes to the heart of a deeper, long-standing controversy over the role of free markets and the role of the government in the economy.

Proponents of a state-directed and funded industrial policy argue that the government has the duty to structure the economy in the national interest, since the free market may fail to do so. We know that manufacturing provides stable, well-paid employment, but that isn’t factored into an individual firm’s decision-making. We can look at American firm’s offshoring of production even though it has cost jobs domestically while also offshoring manufacturing know-how.

As we discovered with Covid, it is very important to produce critical goods domestically. Industrial policy can help a country determine what critical goods it needs to produce domestically, such as medical supplies, or military equipment, for national security reasons. We learned about the automotive chip shortage, which is part of the greater issue of foreign control of global computer chip production.

There is also an argument that the government should fund R&D because the societal benefits go far beyond what companies will ever invest in.

Industrial policy fell out of favor in the US during the 1980s and 1990s with the development of the Washington Consensus, that defined economic development as the result of free-market policies such as the privatization of state enterprises and promotion of free trade.

But because of our competition with China, there’s a renewed interest among DC politicians across the aisle with again doing what Republicans have castigated Democrats for doing: “Betting on winners and losers”.

The bill authorizes the lion’s share of the money, totaling $190 billion, for a major rethinking of federal science, technology and research spending. It creates a new technology division within the National Science Foundation to focus on emerging areas including artificial intelligence. It also gives $10 billion for the Commerce Department to invest in new technology hubs so that other regions and cities across the country can attract the same sort of economic opportunities as Silicon Valley.

If some version of the bill eventually passes both Houses and is signed into law by Biden, it represents a major shift in how the US government manages its relations with the tech sector.

Both Republican and Democrats now suddenly seem interested in government intervention in domestic markets. It turns out that bipartisanship is on the menu whenever the issue is socialism for corporations. We can easily pass legislation that sends $ billions to corporations, but money for voting rights, people’s domestic lives, and infrastructure? Not now, maybe not ever.

China has invested in R&D while the lion’s share of American firms have squandered their money on share buybacks. Shame on us for supporting tax cuts for corporations! If only we had the foresight to know how stupid those things were. Here’s a chart: 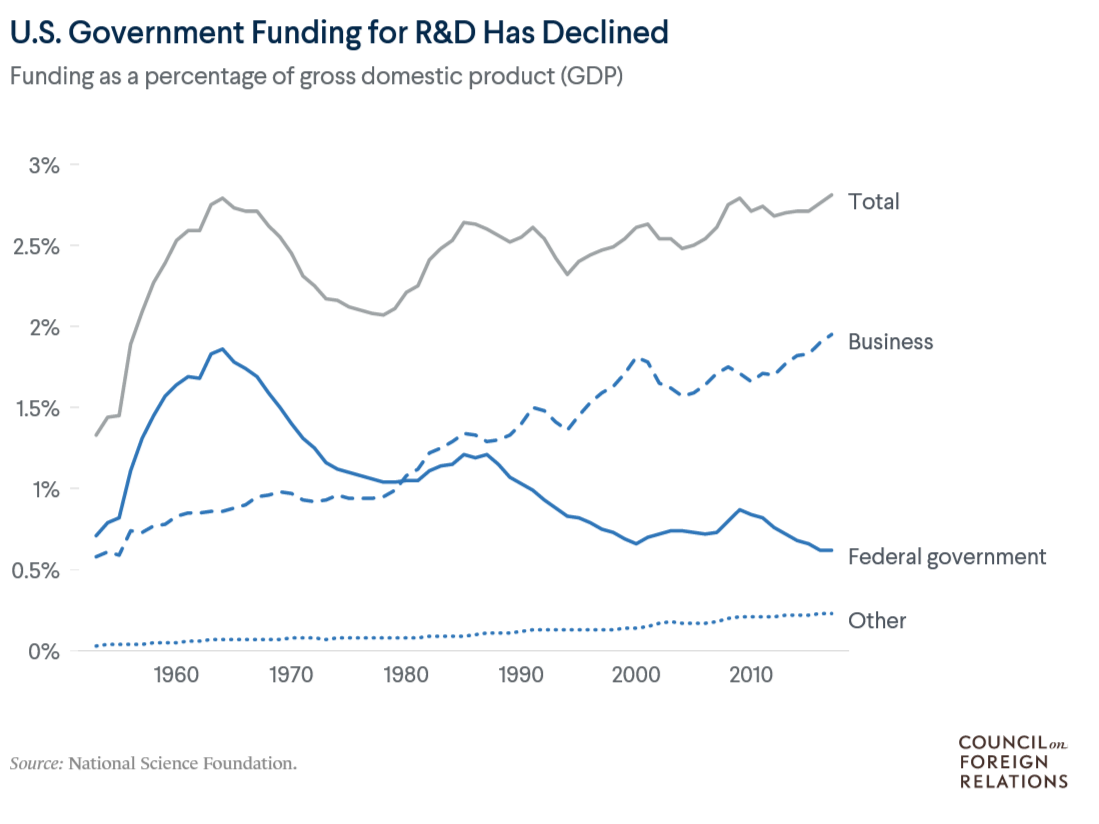 Oh wait. Many of us had that foresight.

We did this with Japan back in the late 1970s. Earlier, we outspent the Russians in the space race.

This time we will probably give $ billions to the some of the same companies that decided to move their factories to China in the first place. Oversight will be crucially important.

Nothing we do will prevent China from educating its people, building new infrastructure, and focusing on STEM. But we can keep our edge over the Chinese by focusing on education, basic research, infrastructure upgrades, and STEM.

And the Chinese won’t be an easy target.

While we debate whether intelligent design and Critical Race Theory should be taught in our schools, the Chinese will be colonizing the Moon. While we fight about the 2nd Amendment, the Chinese are moving to dominate the global economy.

Most of the bill funds domestic investments to remain technologically competitive and reduce dependence on our economic adversaries. This seems like sound policy.