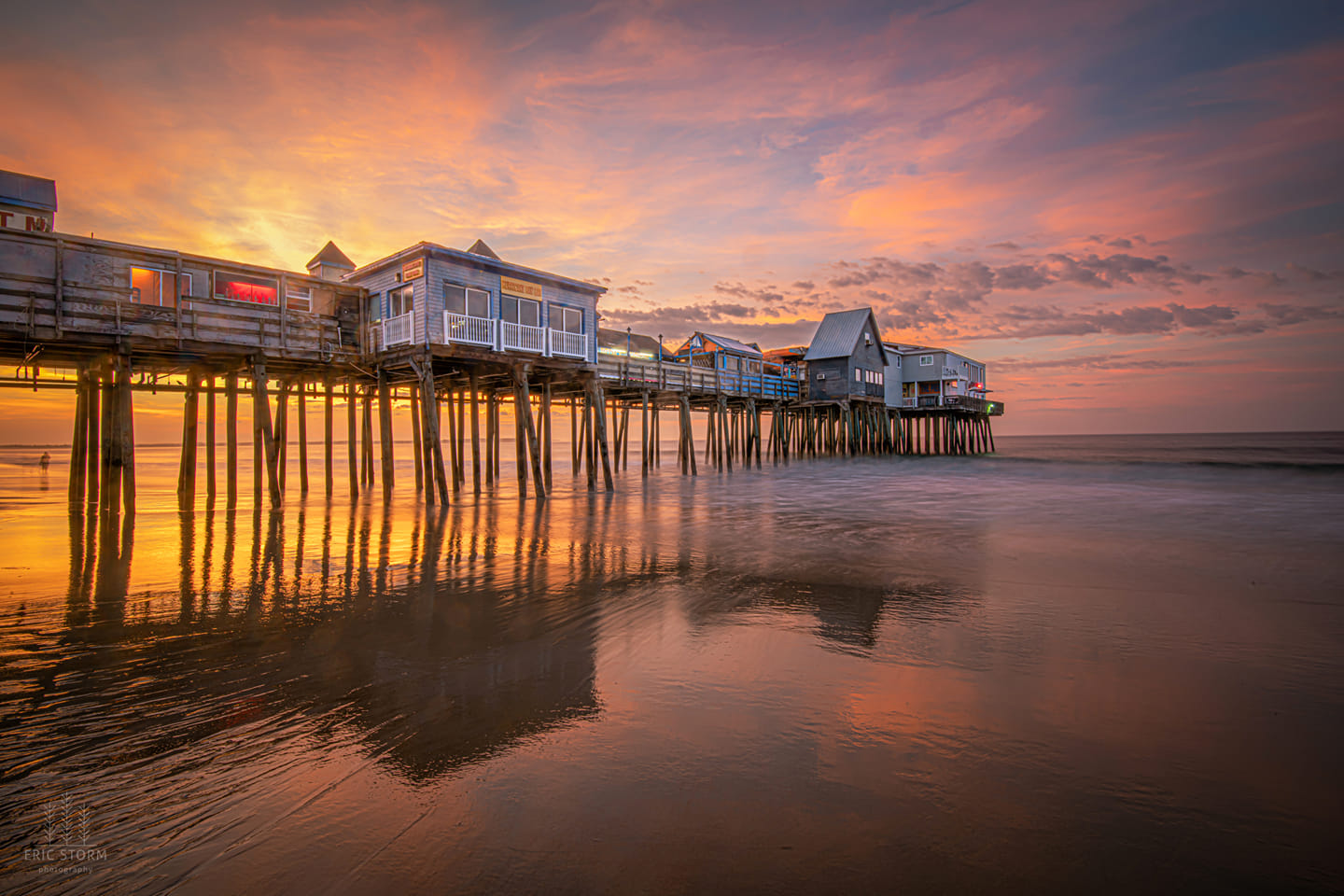 America has a growing vaccination gap. In one part of America, dominated by states that Biden won in November, most adults got their shots and daily life is rapidly returning to normal. But in the other, states that are overwhelmingly Trump country, fewer adults are vaccinated. The chart below from NPR breaks down the distance between us politically. Many blue states have vaccinated more than 70% of their populations, while no red state has vaccinated even 65% of theirs: 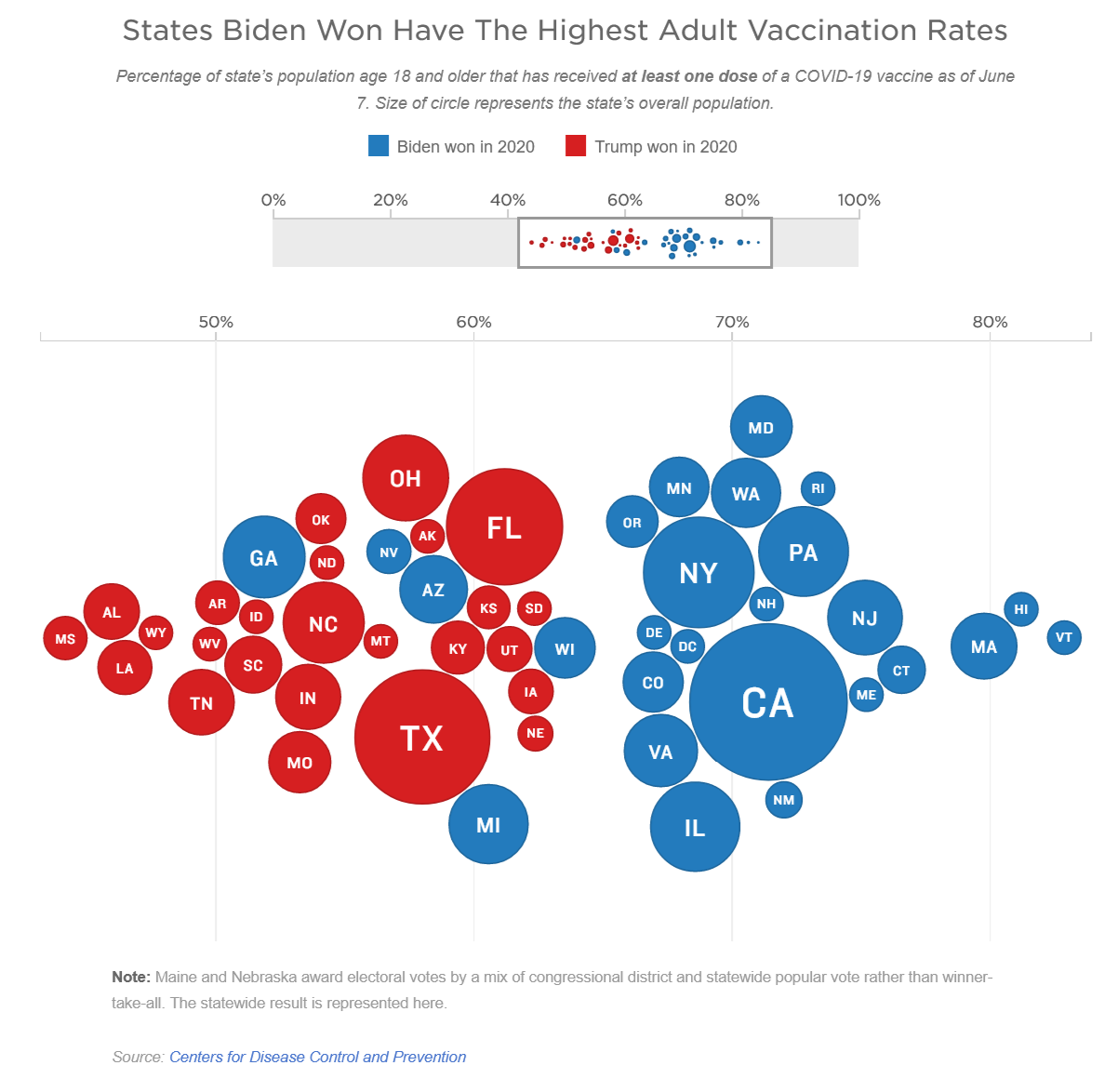 This shows the huge political divide we have around Covid. The top 22 states (including DC) with the highest adult vaccination rates all went to Joe Biden in the 2020 presidential election. And surveys have shown Trump supporters are the least likely to say they have been vaccinated or plan to be.

Alternatively, some of the least vaccinated states are the most pro-Trump. Trump won 17 of the 18 states with the lowest adult vaccination rates. Demographically, these states have higher proportions of Whites without college degrees, while a Gallup poll found that 57% of Republicans say the pandemic is over, compared with just 4% of Democrats.

At CPAC (the Conservative Political Action Conference) held last weekend in Dallas, TX, this anti-Covid vaccine ideology was on display. When the nihilistic shithead Alex Berenson noted that the government is falling short of its Covid vaccine goals, the crowd applauded. Their hypocrisy is breathtaking: When the vaccine first came out, Republicans wanted to call it the “Trump Vaccine”. But since he lost, they want nothing to do with it.

If you’re actively trying to stop a program that saves lives, and you’re doing it purely for political self-interest, what should you be called? We’re talking about lives that could potentially be saved or lost right now, not something that’s simply a projection: We’re talking about 200 Americans dying a day, every day, right now.

And these are the supposed “pro-life” people, the people who would never support a Democrat, because they care so much about “life”. The data, and the “pro-life” people’s actions at events like CPAC show that “life” isn’t really the point.

Time to wake up America! With Covid, Europe is always only a few weeks ahead of us. Here’s the growth in infections there: 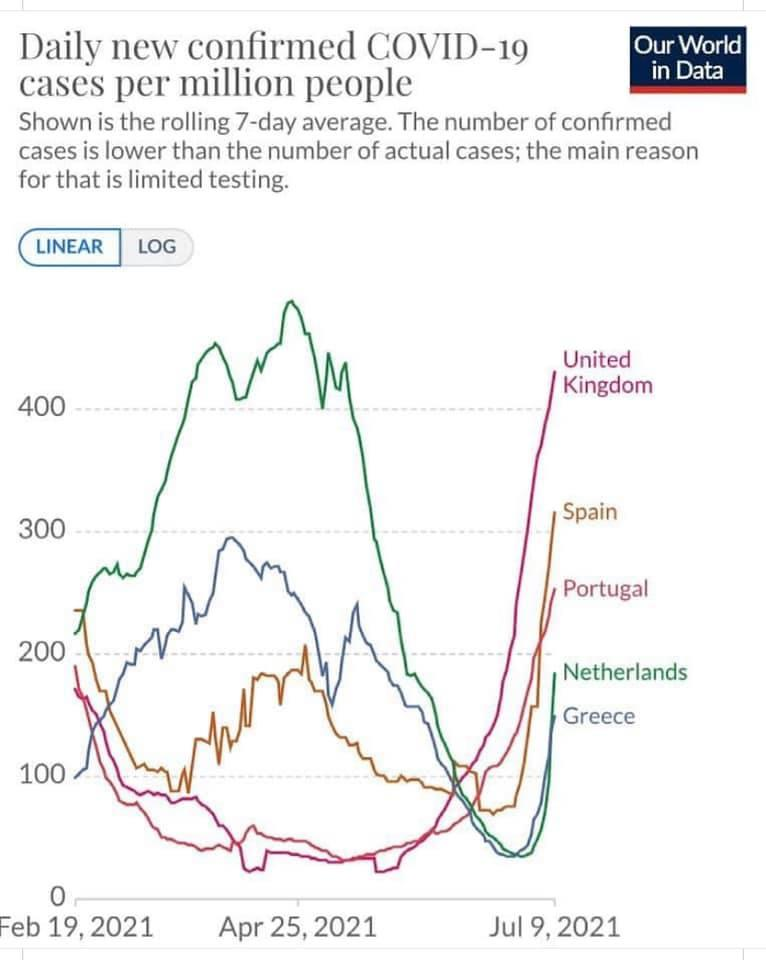 Cases in these countries are spiking due to the delta variant, and it’s already here. Experts think it accounts for more than 50% of US Covid cases, and we are likely to see similar spike in cases.

It has already partially learned to evade our Covid vaccines, at least to some degree. But the fear is that the next variant might be able to outsmart the vaccine, causing deadly problems even for parts of the country that have high vaccination rates.

These GOP political grifters who whip up anti-vaccination sentiment could bring about another pandemic. While the current variants are relatively susceptible to the vaccines. the more the virus spreads, the more opportunities there are for a vaccine-resistant variant to take hold.

Thanks Republicans. To help America wake up, listen to The Foxymorons 2015 tune, “Spinning On A Needle”. Just the name “Foxymorons” sounds like it should be required for all Republicans.

It should make you want to listen regardless of what they sound like:

In a sane version of the US, politicians would be telling everyone to get vaccinated, and when a town of county reached a new level of percentage vaccinated, they would hold news conferences implying that they are partly responsible.

You and I remember when the Salk and then Sabin polio vaccines came along. Folks across the US lined up for doses.

Our founders would be shocked to find that our precious freedoms are now to include the right to be a total asshole.

Agree Terry: I think that anyone who refuses to get vax’ed and then catches COVID is simply getting what they deserve. So, social Darwinism is at work. and I’m ok with that. That’s fine as far as it goes, but many of us are being placed at greater risk of infection or reinfection with the delta variant because of their refusal to get vaccinated. They and the GOP are making America pay a cruel price for their anti-vax stubbornness.