The Right is in hysterics over “critical race theory” (CRT) possibly being taught in public schools. They’re using it as an excuse to try to take over local school boards.

We’re seeing headlines saying, “Republicans push back against critical race theory”. Social media has photos showing “parents” being loud and stupid at school board meetings. You’d think they were protesting because their kids were being forced to eat vegan in the cafeteria!

But instead, what they were protesting is the remote possibility that their kids could be exposed to the truth: that there’s a great deal of racism in America’s past. Sadly, most of those who are making a stink about CRT are either ignorant of what it really means, or simply want to whitewash racism.

In other words, while the use of the expression “pushing back” makes it sound as if people are on the defensive against some odious assault; that isn’t the case at all. These people are on offense.

When the press reports Republicans are “pushing back”, in reality, they are launching a batshit campaign of disinformation and hysteria about whatever the subject is: vaccine policies, fake news, election fraud or, this time, teaching about the impact racism has had on our society.

They have conjured another imaginary monster to scare the American people and project themselves as the nation’s defenders from the fictional monster.

Timothy Snyder, author of “On Tyranny”, had a column in the NYT looking at the current brawl about teaching US history. He sees American conservatives creating what he calls “memory laws”, something that is familiar to students of Russian history:

“This spring, memory laws arrived in America. Republican state legislators proposed dozens of bills designed to guide and control American understanding of the past. As of this writing, five states (Idaho, Iowa, Tennessee, Texas and Oklahoma) have passed laws that direct and restrict discussions of history in classrooms. The Department of Education of a sixth (Florida) has passed guidelines with the same effect. Another 12 state legislatures are still considering memory laws.”

And this isn’t the first time. For many decades, conservative southern school boards have put great pressure on textbook publishers to favor “Intelligent design” over evolution/natural selection (and before that, the Biblical version of creation), and to downplay slavery and emphasize states’ rights in discussing the origin of the Civil War.

GOP politicians should take a beat and remember how the GI Bill discriminated against Black veterans. They should learn how redlining limited where Black vets could purchase homes.

Should we “forget” the compromises in the US Constitution, like the 3/5 clause that southern states required in order to formally ratify it?

Should the reality that the zip code you live in greatly influences the quality of education you receive, also be ignored? These things are all part of the nation’s history. All should be examined so that we can continue moving toward the ideal of being a nation with liberty and justice for ALL. On to cartoons. 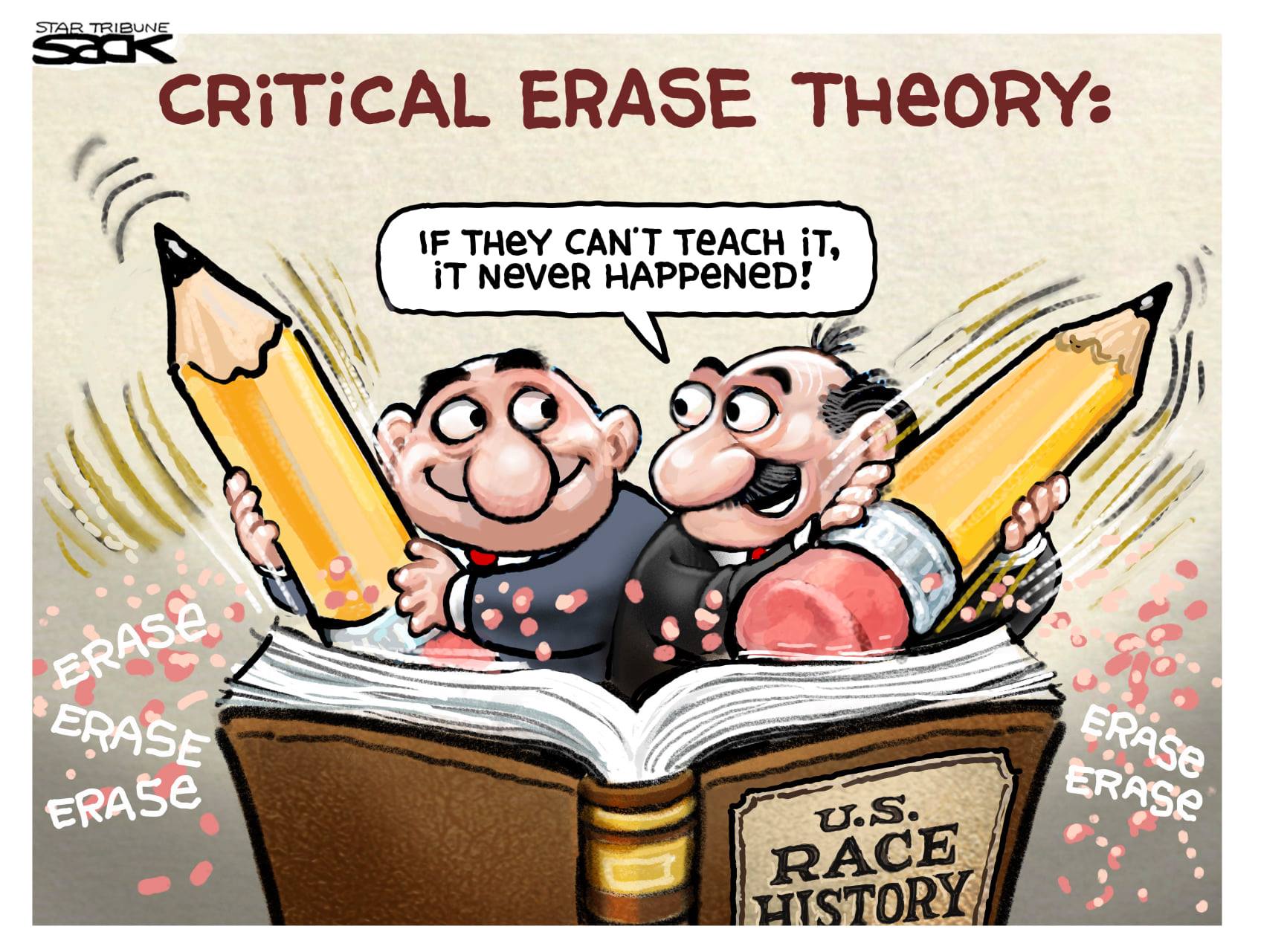 How their plan will look in the classroom: 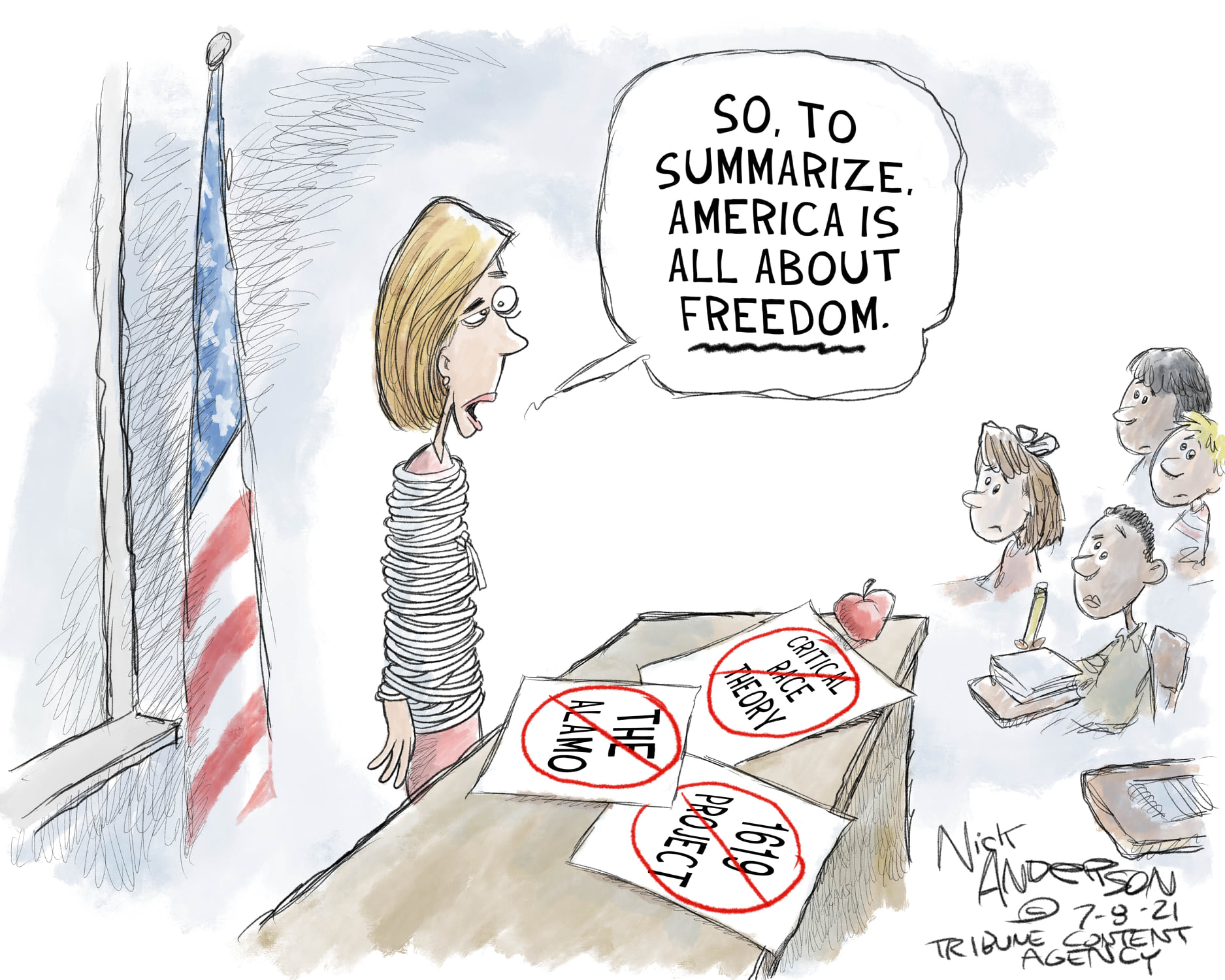 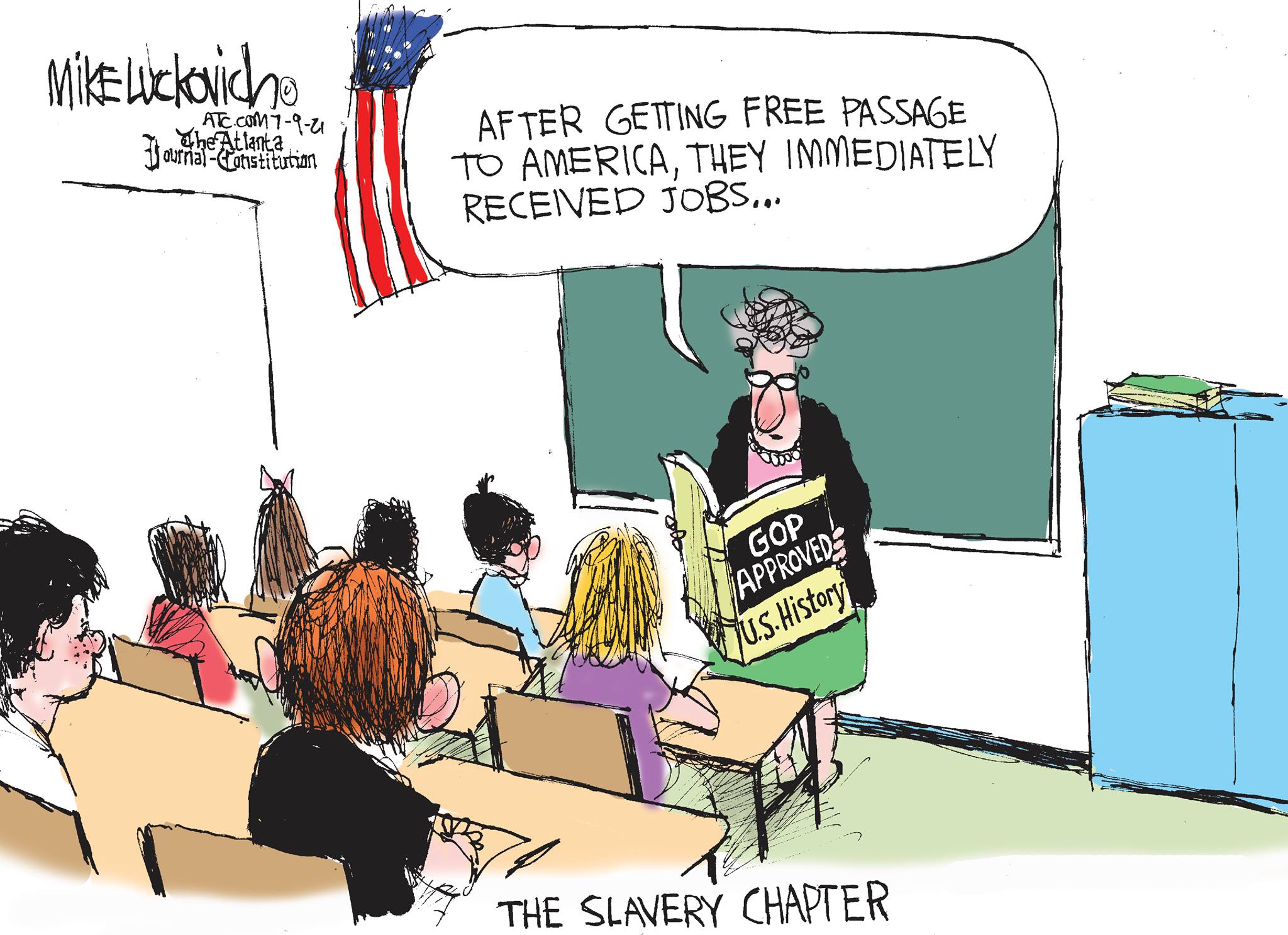 The Supremes remove another monument: 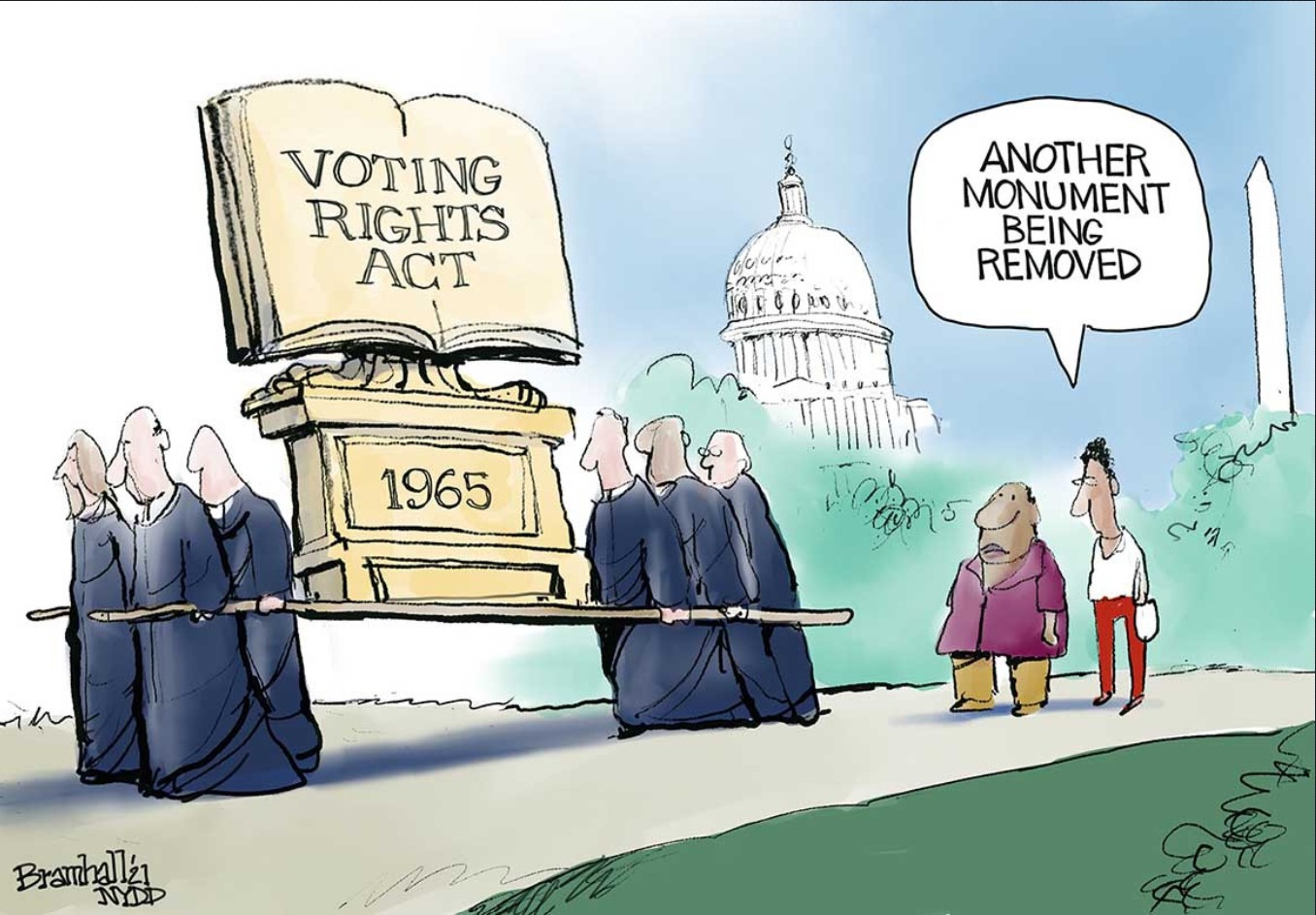 Memories of Saigon return as we leave Afghanistan: 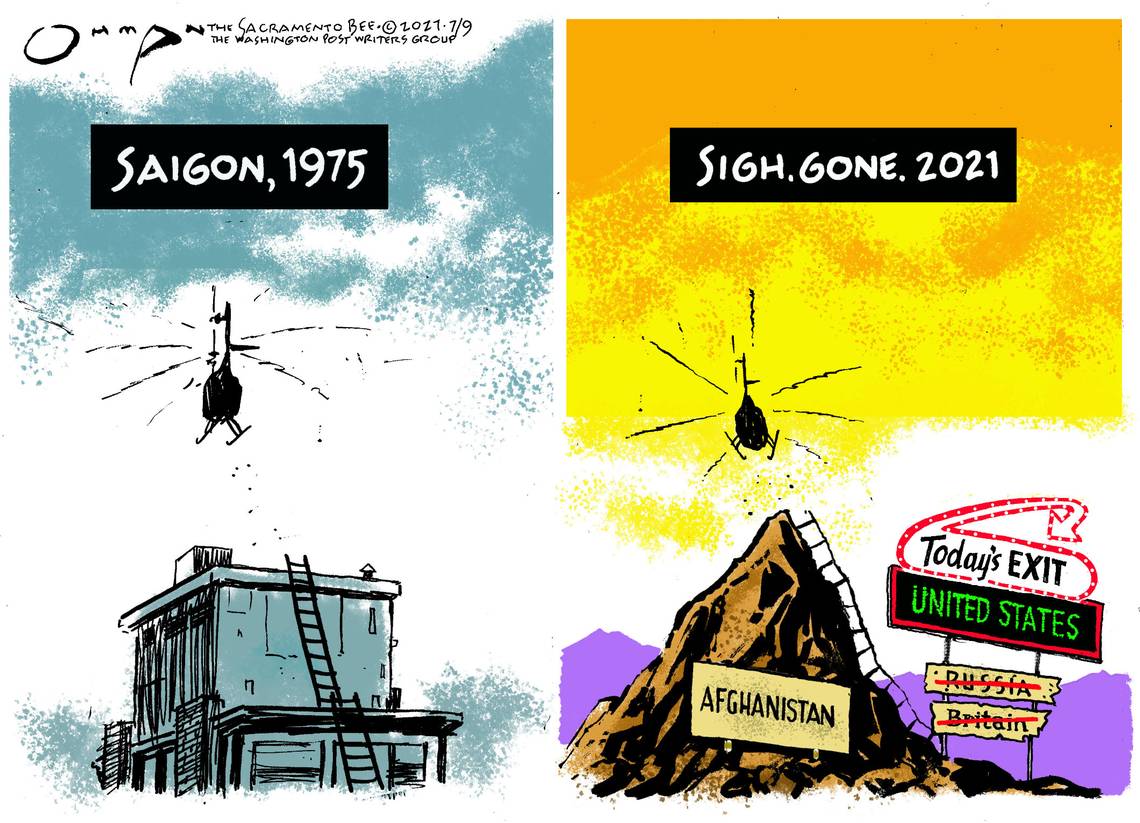