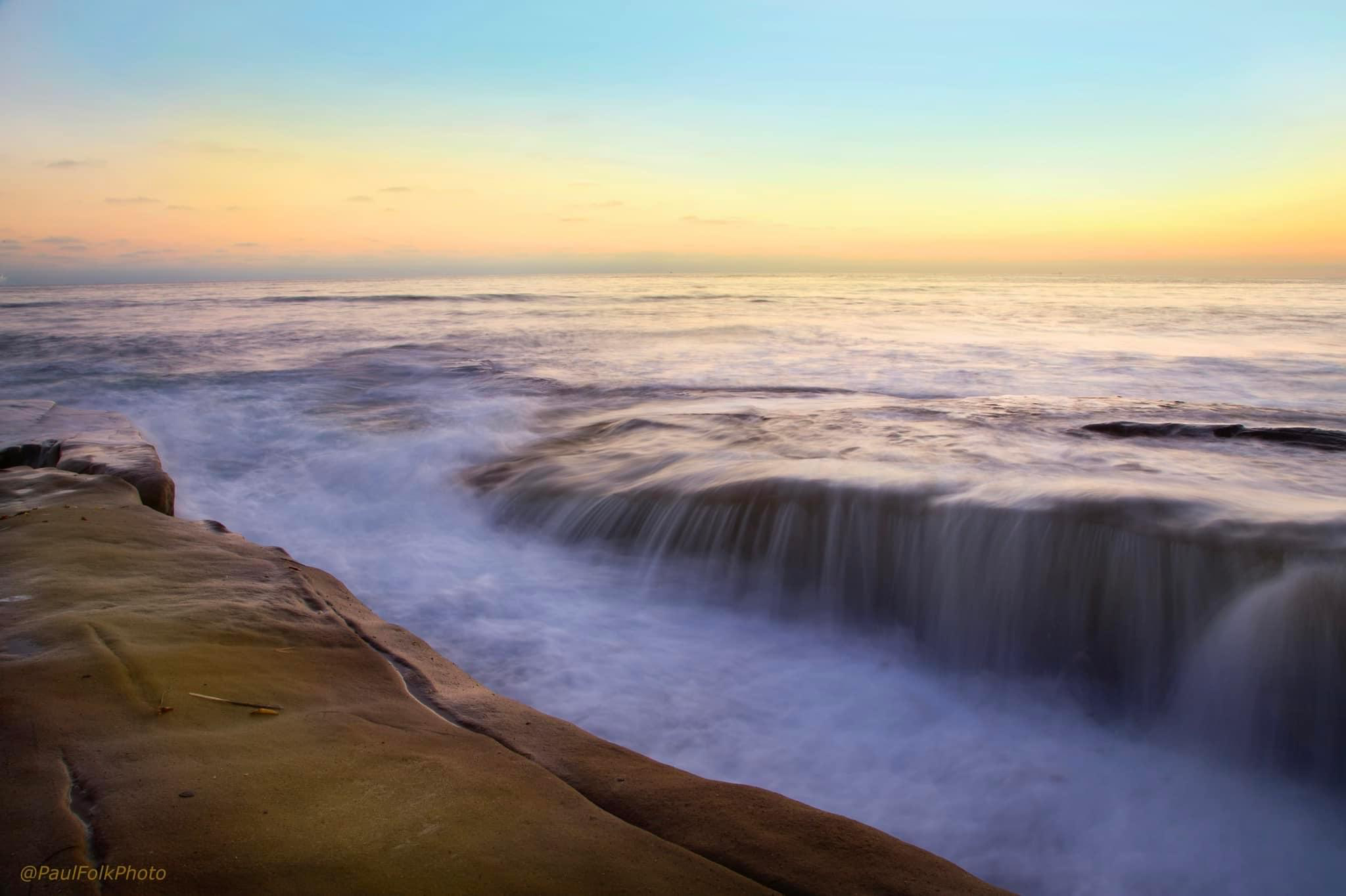 Fed Reserve Chair Powell appeared before the Senate Banking Committee on Wednesday and the House Financial Services Committee on Thursday to talk about inflation and the Fed’s role in bringing it under control. Both Democrats and Republicans agreed with Powell’s desire to bring inflation down as quickly as possible. But they had vastly different views on how the Fed and Congress should do the job.

When pressed by Sen. Elizabeth Warren (D-MA), Powell said higher interest rates could not boost the production of oil or end other supply shocks that are driving prices higher: 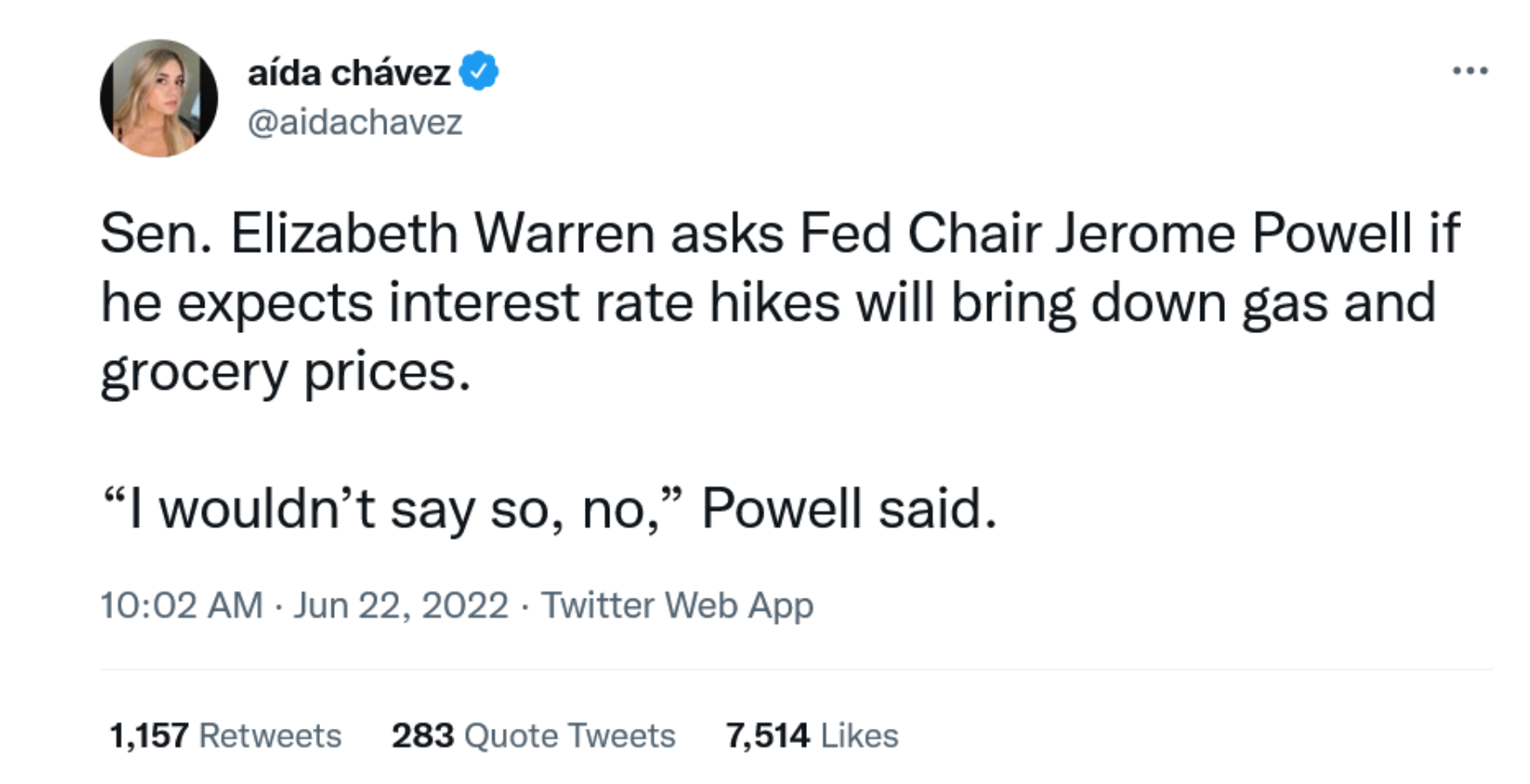 Basically, Powell agreed that the forces causing inflation were largely beyond the Fed’s control.

The Fed is raising interest rates to dampen demand, but consumers are in relatively decent shape and still have money in their bank accounts to spend. If spending declines, companies are often forced to keep prices stable or cut them, which throws some cold water on inflation. But that also can cause job losses and wages to stagnate.

Committee Republicans blamed the Fed for not listening to their calls to raise rates as inflation began to rise last year. Several GOP Senators questioned whether the Fed has the will to induce a recession if that becomes necessary.

Politically, it’s clear that a sharp recession that cost jobs would be ruinous for millions of Americans. But, it has the advantage of giving Republicans a clear path to winning back control of Congress in 2022 and possibly the White House in 2024.

That’s how politics works: The Party out of power blames the Party in power for whatever isn’t working.

However, inflation has multiple causes, most of which Powell admitted were outside the control of the Fed or the White House. Let’s focus on gas prices, an area where neither Biden nor Powell can do much to bring prices down.

The key to gas prices right now is the global lack of refinery capacity. Seeking Alpha reports that excess refining capacity doesn’t exist outside of India, China, and Russia. As a result, US and European refineries are making huge profit margins. From the Economist:

“In normal times, the refining business is a low-margin, low-drama adjunct to the…business of oil production….Refiners typically make profit margins of $5-10 a barrel….This time….Margins for many refiners have rocketed, and bottlenecks in the sector are propelling global petrol prices upwards.” 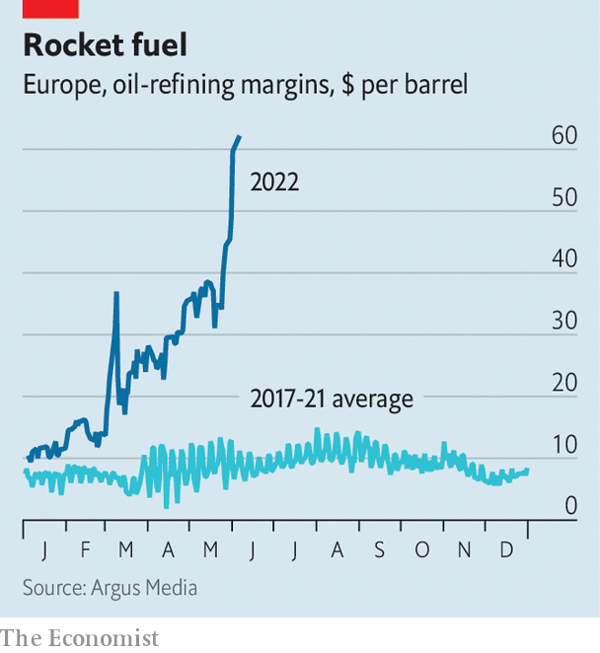 A government report shows that US refining capacity has fallen in the last two years. In fact, it’s where it was in 2014, meaning that gas supplies would still be tight if refineries were running at 100%, and they’re running at close to that. Industry capacity utilization is at roughly 94%, the highest since 2018.

US oil refining capacity has decreased by more than one million barrels/day (5% of the total) since the start of the pandemic. Some old facilities were closed permanently after Covid stopped people from driving, which crushed fuel demand. Other refineries are being modified to produce renewable diesel instead of gas. Those conversions may be too far along to reverse course.

We shouldn’t count on America’s corporations to do the right thing.

Over the longer term, Mr. Market might help save the day. The price spikes will cool demand for gas, which should lower prices. A shift in trade flows could also help. The Economist says that India’s refiners see an opportunity to become, as RBC Capital Markets says, “the de facto refining hub for Europe”.

New refineries are scheduled to come online in Kuwait and Saudi Arabia, which should help ease the shortages too.

The hard reality is that there’s no easy solution for gas prices, or for food prices. If they existed, Biden would’ve flipped that switch months ago. Earlier this week, Wrongo said:

“Will people vote this Fall based on the price of gas? Or the threat of a recession? Or, will they understand that there’s a real possibility that democracy as we know it in the US could vanish?….Inflation comes and goes. Recessions come and go. If we lose our democracy, it won’t be returning any time soon.”

The GOP keeps slamming Biden over inflation, but it has zero solutions to offer, because this shit is complicated. Rep. Elise Stefanik, (R-NY), the third-ranking member of the House GOP, isn’t even pretending the GOP has a plan. She recently said of inflation:

“House Republicans will address these crises when we earn back control of the House this November.”

Sure. You can trust the Party of tax cuts for the wealthy to prevent a recession that will harm the rest of us.

Sound analysis. Difficult decisions ahead. Every vote counts in November!