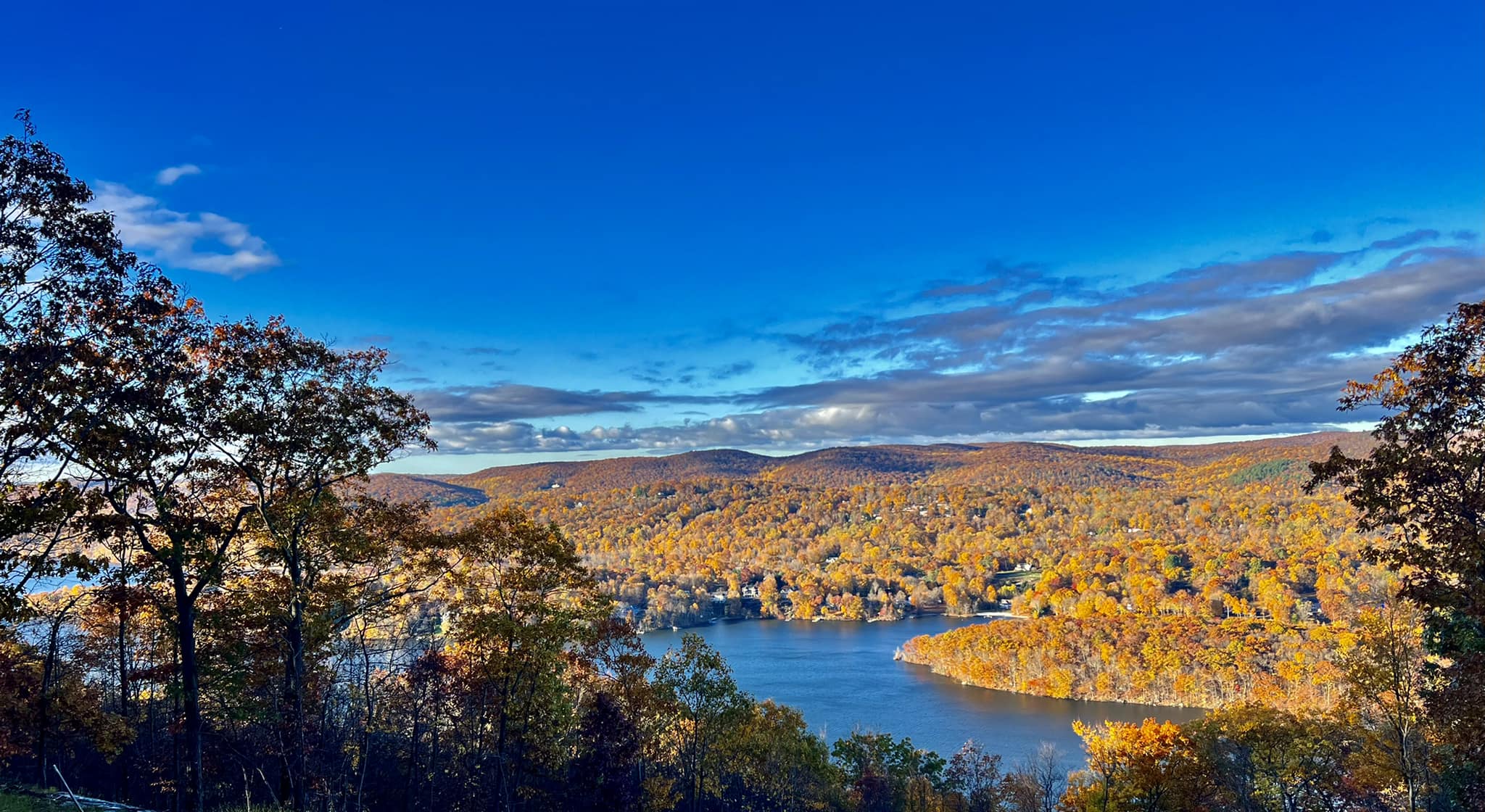 Thoughts on the Thursday before the midterms: 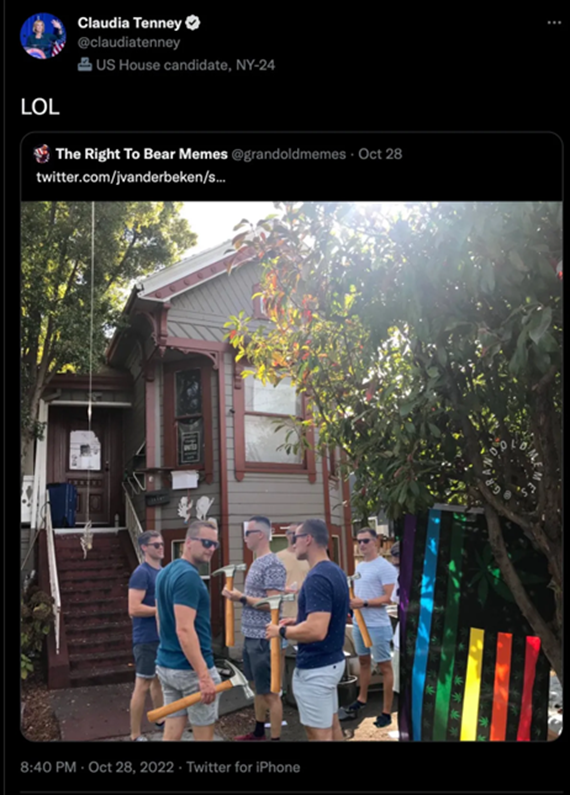 Tenney won her seat in 2020 by around 100 votes. She took office a month after Jan. 6, so she didn’t vote on certifying the election results. She has now vacated her redistricted seat in the 22nd district to run in the neighboring 24th instead.

She is what Republicans have become. It’s true that victims of political violence can be found among both US political Parties, but as David Frum says in The Atlantic:

You don’t see Democratic candidates carrying assault rifles in their campaign ads. Republican candidates, on the other hand, are now more likely to pose with AR-15s than they are with their wives and kids. More from Frum:

“You don’t see Democratic House members wielding weapons in videos and threatening to shoot candidates who want to cut capital-gains taxes or slow the growth of Medicare. Democratic candidates for Senate do not post video fantasies of hunting and executing political rivals, or of using a firearm to discipline their children’s romantic partners. It’s not because of the Democratic members that Speaker Nancy Pelosi installed metal detectors to bar firearms from the floor of the House…”

Max Boot in the WaPo:

“The New America think tank found last year that, since Sept. 11, 2001, far-right terrorists had killed 122 people in the US, compared with only one killed by far-leftists. A study from the Center for Strategic and International Studies last year found that, since 2015, right-wing extremists had been involved in 267 plots or attacks, compared with 66 for left-wing extremists. A Washington Post-University of Maryland survey released in January found that 40% of Republicans said violence against the government can be justified, compared with only 23% of Democrats.”

Political violence in America is driven primarily by the far Right, not the far Left. And the far Right is now the mainstream of the Republican Party. It’s hard to see how this ends well. Maybe we should be calling them the Wrong Wing. You can’t call them the Right Wing because they are completely wrong on every issue.

With so few days to go until the midterms, Wrongo has closed his wallet for all candidates. On our local TV stations, the same ads run constantly, and seem to have little impact. Few of them are any good anyway. Most repeat some version of their national Party line.

It may be too little too late, but the esteemed Rachel Bitecofer who we’ve featured often, was participating on a podcast hosted by Jill Wine-Banks. Wine-Banks asked about better messaging for Democrats. And without hesitation, Bitecofer said:

Doesn’t that ring true? “If Republicans win, you lose.” If that had been the Democrats’ slogan for the midterms, it would have led to some great talking points:

“If Republicans win, you lose” has been true in every election since 1932. So, it’s better late than never to use it as a messaging tool.

We haven’t posted cartoons in a while. Here are a couple to get you in the mood for voting: 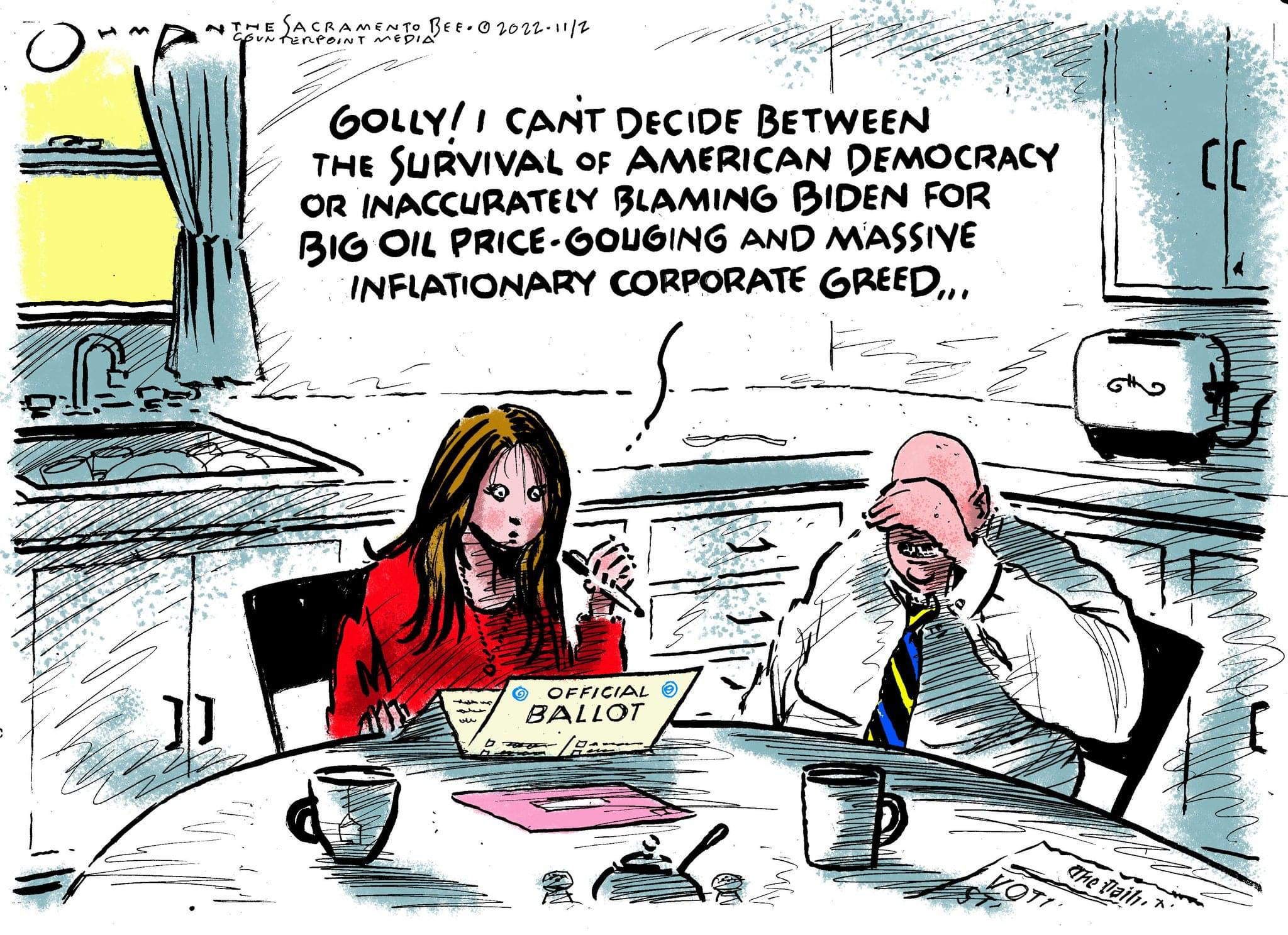 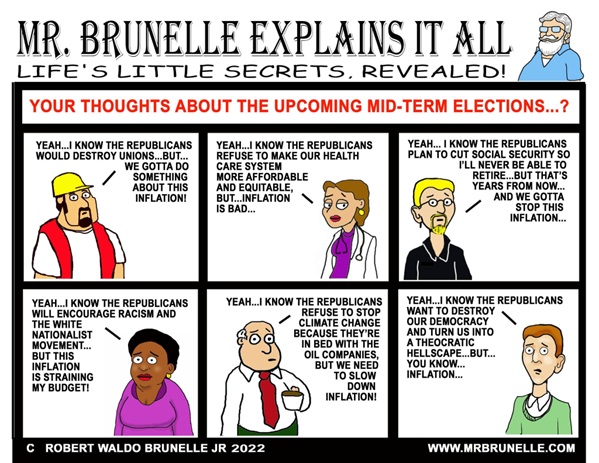 Voting is like driving: If you want to go backwards, you select R. To go forward, you select D.

This is a great closing line: Voting is like driving: If you want to go backwards, you select R. To go forward, you select D.