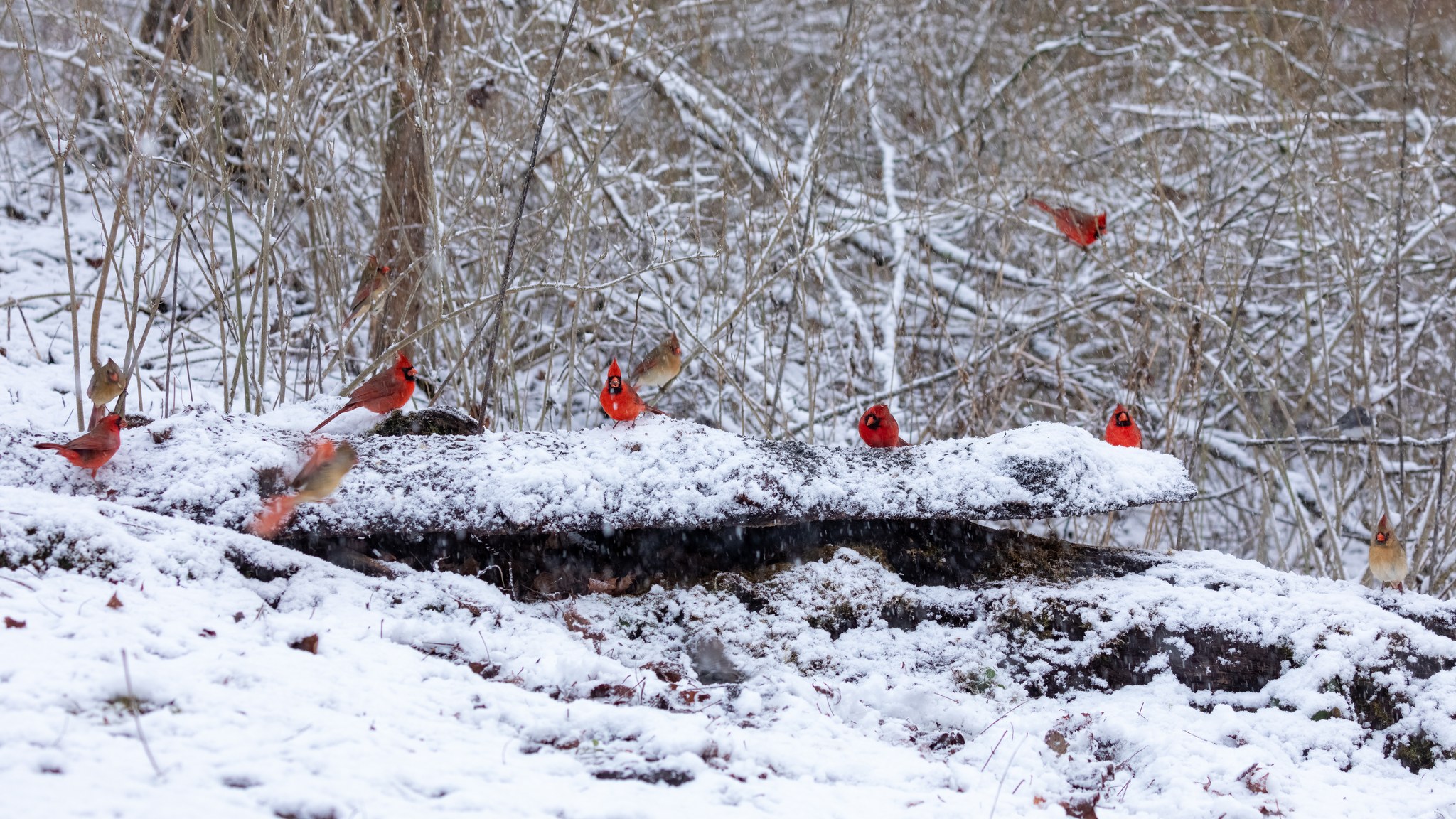 If Ukraine is to stave off the Russians, it needs tanks, but Germany and the US are still reluctant to send their tanks to Ukraine. While each express slightly different reasons for withholding their tanks, it boils down to the fact that both countries seem to believe that their tanks should be used in defense of NATO, and Ukraine isn’t a member.

The question remains “Which weapons are ok to use in Ukraine?” The answer has evolved since the start of the war a year ago. NATO is now giving more advanced weapons than they thought they would, partly because they now perceive the battle for Ukraine as a clear proxy war with Russia.

It appears that the meeting of defense ministers over the weekend in Germany saw the first crack in NATO’s solid support for Ukraine. Military aid from Europe and the US for Ukraine has been the key to Ukraine’s survival and to its ability to blunt Moscow’s superior numbers of troops on the battlefield.

What was agreed isn’t chump change. It includes 200 new artillery pieces. Multiple countries, including Denmark and Estonia, are sending Ukraine literally all of their howitzers. That implies that Ukraine needs artillery pieces as a stop gap until battle tanks can be provisioned. But as of now, no battle tanks.

Germany has been reluctant to provide Leopard tanks. Why that’s what’s Wrong today is summed up by someone who Wrongo never thought he would ever quote, Bill Kristol: 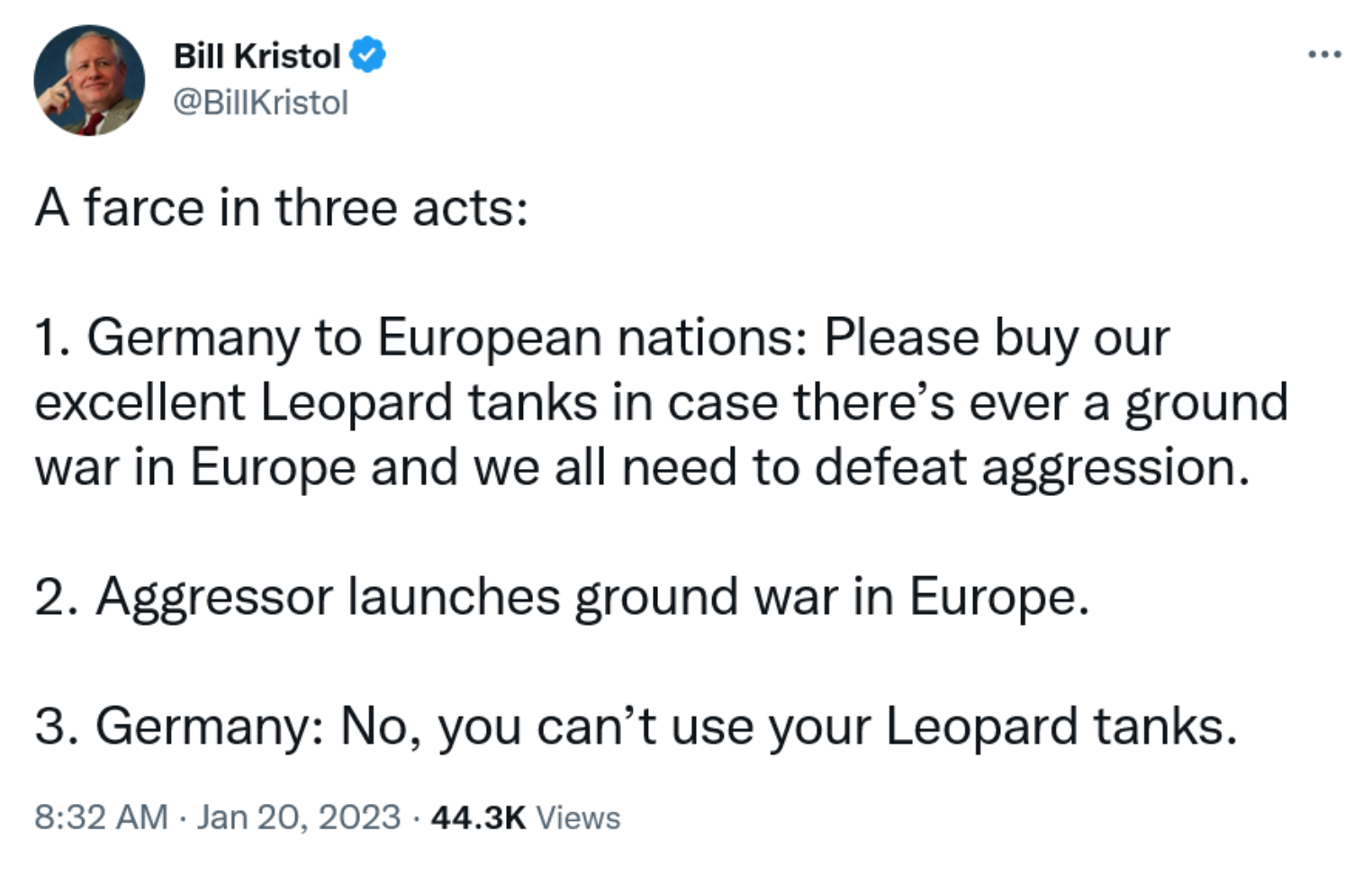 Kristol is on to something. From the WaPo:

“Germany’s Leopard 2 tanks, several thousand of which are in the arsenals of its NATO allies around Europe, are the best such options for Ukraine’s use.”

The Leopards are far more numerous in NATO countries than any other tank. They are more suitable for Ukrainian terrain and maintenance capabilities than the US’ top-of-the-line battle tank, the M1 Abrams.

And it’s rarely a good thing in warfare to have a fruit salad of weapons that in general, have the same capabilities. Ukraine absolutely does not need what Michael Kofman has referred to as a “petting zoo” of battle tanks.

Some armchair generals may think that it would be nice to have one British Challenger or two, several Leopards, and a bunch of Abrams available. But from a training and logistics point of view that’s a nightmare. Of all of these possible weapons, the Leopard is regarded as ideal for Ukraine because:

Retired US General Mark Hertling is adamant that the Leopard 2 is a much better fit for the Ukrainians than the US’s M1 Abrams. His position is based on logistics. Since his whole career was spent as a tanker, he’s probably correct.

The clincher for the Leopard 2 is that 16 European/NATO countries operate them, and thus have the resources to help train Ukrainians in their use and maintenance on a wide scale. These countries would be able to provide Ukraine with at least a base level of spare parts from their existing stores.

Germany also has an issue if they supply Leopards from their inventory: They can’t make enough of them to replace those they give to Ukraine. That would leave Germany needing to replenish by purchasing, you guessed it, M1 Abrams tanks! So, a big win for General Dynamics, maker of the Abrams.

Since the start of the winter, there has been an ongoing degradation of Ukraine’s war making capabilities, allowing Russia to keep pounding while it organizes its newly mobilized forces for offensive action in the spring. The western media has stopped talking about the Ukrainian “win” they spoke about last summer.

Soon, winter will be over and the early spring promises a Russian counter-offensive in eastern Ukraine. At Turcopolier, TTG says:

“By spring the Russians will probably field a large infantry force. But I doubt that force will be anything but ill-trained and ill-equipped. They are not using near enough artillery and armor now to support the infantry they have. Maybe this is because they are holding it back for future offensive operations…..Having said that, I do think they will continue to try to take the Donbas and do their damnedest to hold in the south.”

This means that time is short, not simply to decide on battle tanks, but to get them into position in Ukraine with supply chains up and operating. The alternative is a slow grinding but eventual Russian victory with all that will mean for eastern Europe.

If there are doubts about what losing Ukraine will mean, consider that stopping Russia from winning in Ukraine will end the threat of major war in Europe. We shouldn’t forget that for nearly 50 years, a confrontation with the USSR (and later Russia), was the likely scenario for Europe. A Ukrainian victory would make this scenario implausible.

Some “experts” are saying that provisioning Leopard tanks for Ukraine is not likely to be a game changer on the battlefield. That may be, but it’s a certainty that without them, the war in Ukraine will be won by the Russians.

We need to face it: We’re in a very long, very expensive proxy war between NATO and Russia.