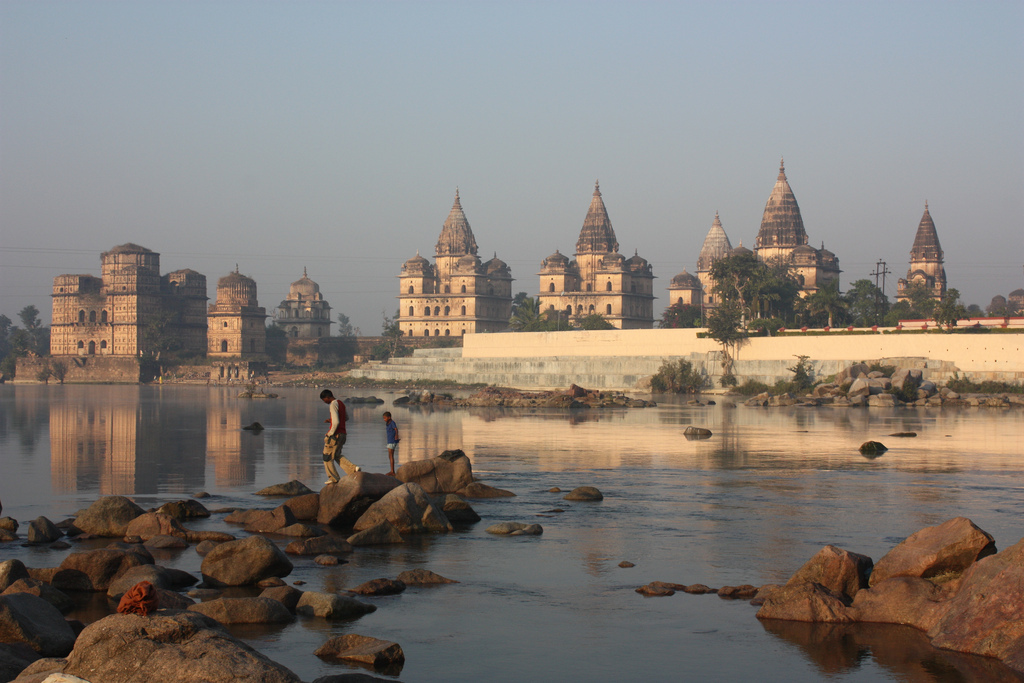 Orchha, on the banks of the Betwa River, India – photo by Arian Zwegers cc 2.0

Quite the week: After threatening nuclear war with North Korea, musing about invading Venezuela, and equivocating over Charlottesville, Trump folded two advisory councils and then decided against forming a council on Infrastructure. He also Twitter-attacked more Republican senators than Democrats this week, a bad strategy for someone who can’t be sure what Special Counsel Mueller may come up with.

But, according to a Survey Monkey poll as reported by Axios, Trump’s statements about Charlottesville have overwhelming support of Republican voters. Survey Monkey asked whether people agreed with a verbatim quote from President Trump on Tuesday:

When we no longer agree on basic facts, civil debate is impossible.

This is a dangerous moment. America is split. We need to stop fighting about the little things. Wrongo usually is against “slippery slope” arguments, but will make an exception in the case of our Civil War history: What is the objective of removing Civil War statues and monuments? Will their removal change the historical record of slavery?

Of course not. How would supporters of removal say we should polarize the continuum of history? What would be next? Removal of history books that mention the Confederacy or former slave owners?

One of Wrongo’s favorite histories of the Civil War is “A Diary from Dixie” by Mary Boykin Chestnut. It is a day-to-day diary of her experience as a southern partisan during the Civil War. Most Civil War historians have read and consulted it in the preparation of their own work. Should we burn the book because it was written by a slave-holding partisan?

Many want to draw a red line regarding slavery and the Civil War, and that is totally understandable. But where to draw it? Can it be drawn in a way that keeps our children in touch with our past, even the sordid bits?

We need to own our history.

Some have pointed to the fact that Jews would never let Auschwitz, Dachau or Buchenwald be taken down. This is another false equivalency. Auschwitz is maintained not to celebrate Nazism, but to show its horrors.

Maybe that IS the lesson: Add interpretation to the Confederate monuments: Make them say that we do not want anyone to forget what happened, and that we want to make sure it can never happen again.

It’s Saturday, so we MUST get some distance between where we are as a country now, and where we need to be.

Wrongo and Ms. Right heard it last week at the final summer concert of the New Baroque Soloists at the Washington Meeting House in Washington, Connecticut. Here it is performed live by the Remember Barockorchester, in the Unser Lieben Frauen Church, Bremen, on November 21st, 2015:

The Viola Soloist is Tomoe Badiarova

Those who read the Wrongologist in email supplied by the execrable Feedburner, can view the video here.

In his latest book, The Last of the Presidents Men, Bob Woodward reveals a previously unreported memo from 1972 in which Nixon writes Kissinger, saying that a years-long bombing campaign in Vietnam had produced “zilch,” even as he pitched the exact opposite message to the American public. He wrote that the day after giving an interview to Dan Rather, declaring that the bombing of North Vietnam had been “very, very effective”. Nixon’s note said:

K. We have had 10 years of total control of the air in Laos and V.Nam. The result=Zilch. There is something wrong with the strategy or the Air Force.

Nixon then increased bombing, dropping some 1.1 million tons in 1972 alone — more than in any single year of LBJ’s presidency. From Woodward: (brackets by the Wrongologist)

[Nixon] Us[ed] Vietnam to enhance his re-election prospects…breaking perhaps the most sacred trust for a commander in chief.

All these years later, it is hard to believe that anything Nixon did could surprise us, yet there it is.

Since the 1970’s, a meme among conservatives is that the reason we lost in Vietnam was a lack of will, brought on by liberals and war protesters. But thinking that the primary reason we lost Vietnam was that liberals stabbed America in the back is ridiculous. You may remember that in 1968, Nixon said he had a “secret plan” to end the Vietnam War. He had no plan, and by 1972, when he sent the note to Kissinger, he knew he was losing the war.

In total, the war stretched on for 7 years after the announcement of Nixon’s “secret plan” to end it.

Today we hear that feckless leadership is causing us to “lose” in Iraq, Afghanistan and Syria. This comes from a few career military, and many, many Republican Chicken Hawks, who continue to raise the specter of Vietnam.

On Veterans Day, let’s remember that Vietnam, Iraq, Afghanistan are all places where our boys bled and died on foreign soil. All are places where our money was recycled to the war profiteers, and where we left behind zero ability to foster the “democratic” way of life that our politicians wanted to bring to those nations.

And what about the “sacred trust?” Politicians break the sacred trust to its citizens and soldiers all the time, if there is an opportunity to spread the gospel, secure the oil, or beat the “enemy”. War profiteering for private corporations, socialized losses for the people. US soldiers dead or maimed for life. Their families robbed of optimism, their memories an open wound.

THAT is the sacred trust in ruins. That is the legacy of Vietnam, Iraq and Afghanistan on this, and on all Veterans Days.

And do the Chicken Hawks take care of our veterans after the fact, once they come home? They do not. The CH’s “cut taxes” mantra means that more money for the oligarchs has to come from somewhere. So, they try to cut social programs, because war profiteers (including those in Congress) can’t make any money off government-run, not-for-profit social programs.

Veterans have been with us since before the founding of the Republic. To observe this Veterans Day, here is a reasonably obscure song by Bob Dylan, “’Cross the Green Mountain.” It appeared on the soundtrack of the film, “Gods and Generals,” a Civil War film that was entirely financed by Ted Turner as a pet project.

The song speaks to the horror faced by soldiers in the Civil War. Dylan’s Civil War tale could be about any war, as his worn-down singing captures the essence of a soldier pining for home while reflecting on what may be his last battle, his last moments in life. Below is the abbreviated version of the song that was used as the official music video:

That gives you a taste, but if you want the whole thing, the full 8 minute song was part of Dylan’s Bootleg Series #8: “Tell Tale Signs,” and you can view it here.

Here is a photo with commentary by the indispensable Charles Gaba, who runs the site, ACA Signups, the go-to place for data about the Affordable Care Act: 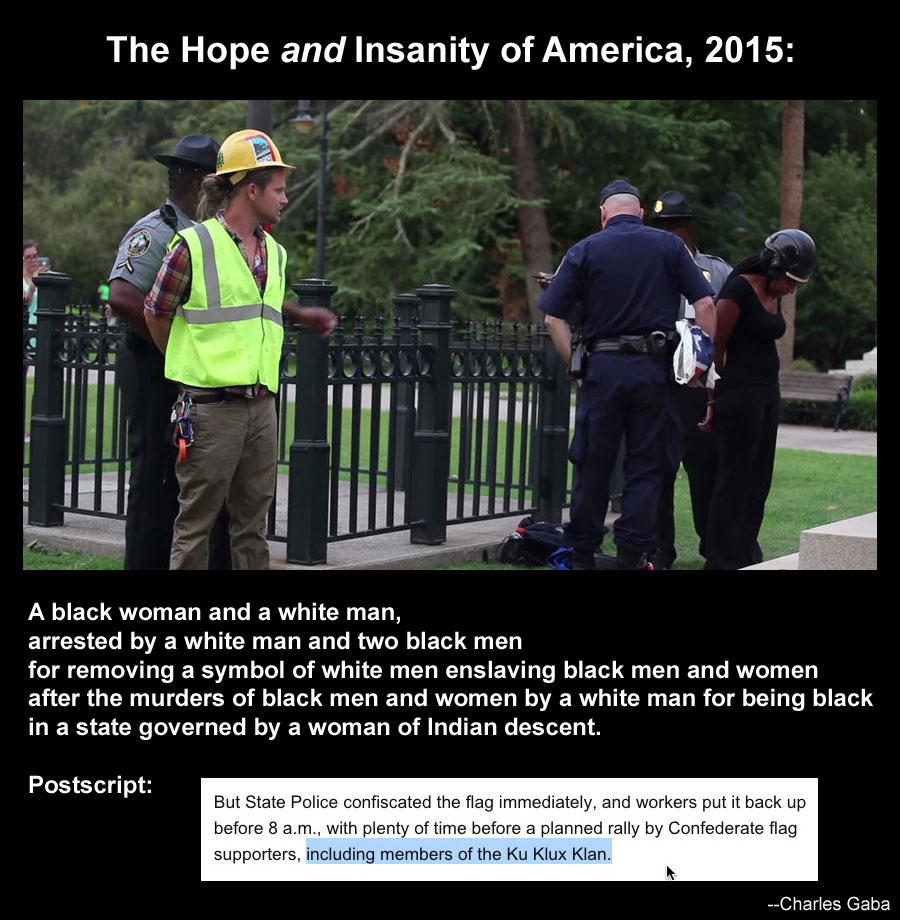 Apparently, 12 people showed up for the Confederate flag rally.

The Voting Rights Act, along with the Civil Rights Act of 1964, were the largest step forward for equal rights in our nation’s history, certainly more important than the Emancipation Proclamation.

We are fascinated by the Civil War because it is an epic story. The American Republic was founded in 1789, and the nation only lives 72 years with slavery before it is torn apart by the argument over states’ rights, and the right to own slaves. We go on to fight a war that kills some 750,000 people, (equal to 7 million today). We then free 3.5 million people overnight, and then take years to try to put the country back together. Today, about 1 in 3 Americans can trace an ancestor to one side or the other in the Civil War. That adds up to about 100 million of our population who are remotely connected to the war.

What is sometimes lost in the story is that Lincoln, a Republican, introduced big government to America. At the start of the war, the country had a weak central government. Lincoln built the centralized state. Consider what Lincoln created:

• The first national income tax
• The first military draft
• The Quartermaster Corps, which became the 2nd largest employer in the country during the war, behind only the Union Army
• The largest confiscation of property in US history when he emancipated the slaves. Slave owners in the South lost $3.5 billion of net worth in the process
• A re-imagining of the US Constitution, passing the 13th, 14th, and 15th Amendments, ending slavery, formalizing birthright citizenship, creating black male suffrage, and guaranteeing equal protection under the law. It can be said that these Amendments were a second American revolution.

Yale University Professor of Civil War History, David Blight wrote in The Atlantic that the nation has never truly gotten over that conflict. He says that the great issues of the war were not resolved at Appomattox, and in a sense, not only is the Civil War not over, it can still be lost.

When we think about the legacy of the Civil War, one of the issues that we have re-visited since the Reagan era is the revival of a debate about states’ rights and the place of federalism in our Republic. This is a persistent legacy of the Civil War, the issue of state power versus federal power: does America owe its first loyalty to the Supremacy Clause of the Constitution, that says the Constitution, federal statutes, and treaties are “the supreme law of the land?” Or does the 10th Amendment come first, which states that the federal government possesses only those powers delegated to it under the Constitution?

Professor Blight says that the question we have to ask the states’ rights supporters is: “states’ rights to do what?” Or, “for whom and against whom?”

Lately, conservative partisans have brought back “nullification”, but couched in near-Orwellian terms, such as “right to work,” or, “religious freedom.” We have 36 state legislatures controlled by Republicans that are trying to eliminate abortions, remove environmental protections, enhance gun rights, and privatize education, all of which need a weaker federal government to succeed.

And every time a politician of the South says she/he is “standing on principle” and pledges “a return to our founding principles of limited government and local control,” our progress from the time of the Emancipation Proclamation, through the New Deal reforms, to the 1960’s Civil Rights acts are again threatened.

50 years after the Voting Rights Act, we are finally aware that there are millions of Americans who have never fully accepted the verdict of Appomattox.