Lake Waramaug, Litchfield County CT. It is the second largest natural lake in the state.

Our problems with North Korea (NK), and the impossible negotiating position we have with them, brings to mind Israel’s relationship with Palestine. Both NK and Palestine:

And both countries appear unwilling to negotiate with their sworn enemies towards a peaceful solution. We officially ended the Korean War in 1953. The parties to the Armistice tried to negotiate a withdrawal of foreign forces from the peninsula and settle the question of who would rule a reunited Korea. Talks took place in 1954, but broke down over how to hold fair elections for a unified government.

The Armistice specified that no new weapons would be introduced on the peninsula, but in 1957, the US informed NK that it would no longer abide by that part of the Armistice agreement. In January 1958, the US deployed nuclear missiles capable of reaching Moscow and Beijing, in South Korea.

We kept them there until 1991, and tried to reintroduce them in 2013, but South Korea refused. NK conducted its first underground nuclear test in 2006.

NK has very close relationships with many Arab countries. From the Diplomat:

North Korea…actively supported Arab countries in their military operations against Israel. During the 1973 Yom Kippur War…North Korean pilots staffed Egyptian MIG-21s…During the 1980s, North Korea shifted [to] arms…sales to Israel’s enemies in the Middle East. The DPRK exported missiles to Iran, Syria, and Libya and assisted both Syria and Iran in their attempts to develop nuclear weapon capabilities.

NK’s relations with the Palestine Liberation Organization (PLO) began in 1966. NK today recognizes the sovereignty of Palestine over all territory held by Israel, except the Golan Heights, which NK considers Syrian Territory. The Diplomat says that NK helped Hezbollah build underground tunnels in Lebanon.

Quartz reports that NK helped Syria build a nuclear facility (that Israel destroyed in an air raid in 2007). In 2014, Syria asked NK to help monitor its presidential elections. In 2016, NK sent two units to fight in the Assad regime’s civil war.

Al-monitor reports that NK also cooperates closely with Iran. Israel believes that Iranian scientists were present at most of NK’s nuclear tests. Iran’s Shahab missiles were developed with the assistance of NK, and are based on the NK Nodong missile.

Where do we go from here? After 63 years, we have failed to successfully negotiate with NK. Even Steve Bannon gets it: 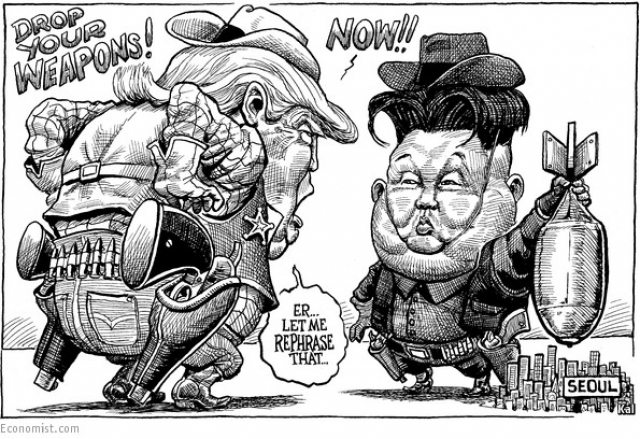 We are stuck in the moment, and we can’t get out of it, just like Israel and Palestine.

Our history with NK tells them that we are not trustworthy. Barack Obama replaced direct engagement with pressure tactics, called “strategic patience.” He also rejected negotiation with NK without a prior commitment to denuclearization.

And here we are. We won’t talk to them unless they give up the bomb. They already have the bomb, so they won’t be giving it up. We can’t move against them without huge damage to Japan and South Korea. Would we sacrifice either country to save the US homeland from a NK nuclear-tipped missile?

What should we do now? Will we accept the fact that NK is a nuclear power? Will we continue to rely on sanctions?

Would we agree to stop the provocative war games?

What will the Trump administration do to avoid nuclear war?

Nobody knows. Here is U2, live in Boston in 2001 with their Grammy-winning “Stuck in a Moment You Can’t Get Out Of” from their 2000 album, “All That You Can’t Leave Behind”:

As you sing along, remember the song was written to persuade someone that suicide wasn’t the answer.