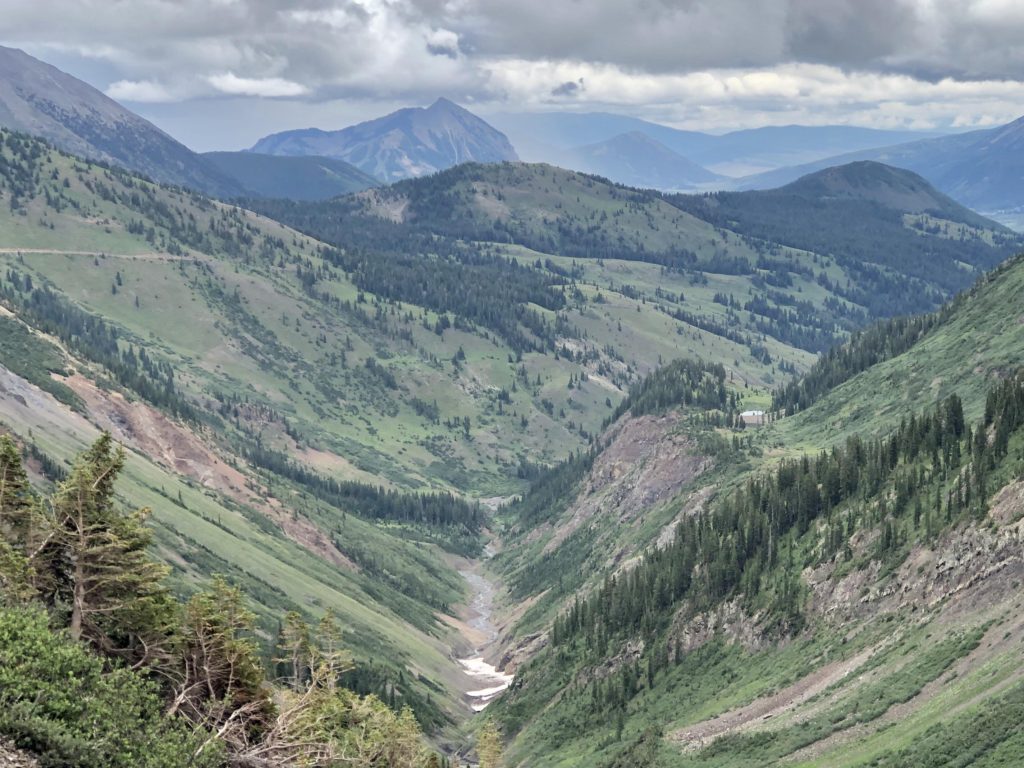 Paradise Pass with Crested Butte in the distance, CO – 2020 photo by glacticspark

The second biggest story of the summer is the widespread support of the protesters, those people of all races and ages, who took to the streets to say something about racism in America. Portland is and seems likely to remain the epicenter of the Trump administration’s law and order response.

America’s First Amendment rights are under attack in Portland by Trump’s paramilitaries every day. How can that be? Few have heard of US Code 1357. It allows immigration officers to operate within 100 miles of any external US border. Hence Trump could call out border troops to DC, Portland, or Chicago.

USC 1357 gives DHS jurisdiction over about two-thirds of the US population. They can enter any building that isn’t a dwelling within 25 miles of the border without a warrant.

The regulation was adopted by the US Department of Justice in 1953. At the time, there were fewer than 1,100 Border Patrol agents nationwide; today, there are over 21,000.

These problems are compounded by a lack of personnel oversight by Customs and Border Protection (CBP) and the DHS. The CBP consistently fails to hold its agents accountable for abuses.

Portland has protests on most days of the year. It’s part of the DNA of the city. Now, it’s looking like Trump’s paramilitaries are trying to foment violence and create a backlash among the protesters. The NYT reports on how these troops were the instigators of recent violence: (emphasis by Wrongo)

“After flooding the streets around the federal courthouse in Portland with tear gas during Friday’s early morning hours, dozens of federal officers in camouflage and tactical gear stood in formation around the front of the building.

Then…the officers started advancing….they continued to fire flash grenades and welt-inducing marble-size balls filled with caustic chemicals. They moved down Main Street and continued up the hill, where one of the agents announced over a loudspeaker: “This is an unlawful assembly.”

By the time the security forces halted their advance, the federal courthouse they had been sent to protect was out of sight — two blocks behind them.”

What’s the end game for Trump in Portland?  His paramilitaries aren’t going to murder groups of protesters in cold blood, so what are they going to do? Have nightly tear gassing until the November election?

Trump’s paramilitaries are saying to Portland: “We wouldn’t have to violate your Constitutional rights if you didn’t insist on exercising them.”

There is libertarian support for ending the Trump paramilitary presence in Portland. Libertarians acknowledge that there is no police power in the Constitution. Policing is left to the states. To the extent the President can send federal officers into Portland or other cities, it should be limited to protecting federal property, not moving into crowds that are two blocks away.

The libertarian argument would say that the people of Portland and other cities have the right to decide who they want to elect to City Hall and how much funding they want to provide for their police. The federal government should only be brought in to defend federal property if the local police are unwilling or unable to do so.

Ironically, during the Obama administration, the GOP thought that the “arming up” of America’s internal security forces like the CPB was a risk to THEM. Now, when it’s impacting Democratic-voting cities, they’re all for it.

Trump’s election chances seem to depend on whether he’s Nixon reborn in 2020. Nixon ran on law and order and against violent demonstrations, largely by students who were against the Vietnam War. Protests never spread as broadly as this in the 1960s. To a great degree, the Vietnam protests were by white college age youth. That isn’t true of today’s protesters.

Trump’s law and order gambit is that Antifa Marxists will take over our cities and then, our suburbs. He’s clinging to the idea that there is an equivalent of the “silent majority” of 1968 still out there to elect him.

But Vanity Fair reported some new polling on the response to Trump’s anti-BLM efforts. If those polls are correct, the silent majority of 2020 is firmly on the side of Biden when it comes to issues of race and justice. Nixon’s ghost seems to have left the building.

Time to wake up America! People in Portland are not afraid of the protesters. They know that their safety isn’t in question. There’s no doubt this is a protest against the government, not their fellow citizens.

To help you wake up listen to Peter Green, guitarist of Fleetwood Mac who died this week, play “Albatross” from 1969’s “The Pious Bird of Good Omen”:

This reminds Wrongo of Santo and Johnny’s “Sleepwalk” from 1959.