From the Atlantic’s article, How Could the CDC Make That Mistake?: (brackets and emphasis by Wrongo)

“The Centers for Disease Control and Prevention is conflating the results of two different types of coronavirus tests, distorting several important metrics and providing the country with an inaccurate picture of the state of the pandemic.

The agency confirmed to The Atlantic…that it is mixing the results of viral and antibody tests, even though the two tests reveal different information and are used for different reasons. This is not merely a technical error.

States have set quantitative guidelines for reopening their economies based on these flawed data points….Viral tests, taken by nose swab or saliva sample, look for direct evidence of a [current] coronavirus infection.…Antibody tests, by contrast, use blood samples to look for biological signals that a person has been exposed to the virus in the past.

A negative test result means something different for each test. If somebody tests negative on a viral test, a doctor can be relatively confident that they are not sick right now; if somebody tests negative on an antibody test, they have probably never been infected with or exposed to the coronavirus….The problem is that the CDC is clumping negative results from both tests together in its public reporting.”

The CDC stopped publishing a complete database of daily test results on February 29. When it resumed publishing test data, the website explaining its new COVID Data Tracker said that only viral tests were included in its figures:

“These data represent only viral tests. Antibody tests are not currently captured in these data,”

On May 19, that language was changed. All reference to disaggregating the two different types of tests disappeared.

The change has made the CDC’s testing data look more favorable. Last Monday, a page on the agency’s website reported that 10.2 million viral tests had been conducted nationwide since the pandemic began, with 15% coming back positive. But on Wednesday, after the CDC changed its terms, the same page said that 10.8 million tests of any type had been conducted nationwide, and the rate of positive tests had dropped by one percent.

Blending viral and antibody tests will drive down the rate of positive tests dramatically. It makes it look safer to reopen the economy. On to cartoons.

Reopen the economy. What could go wrong? 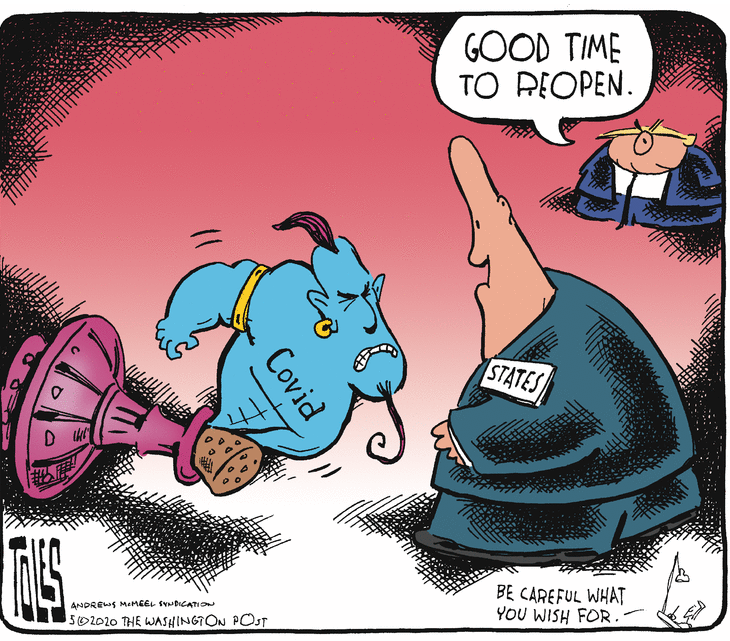 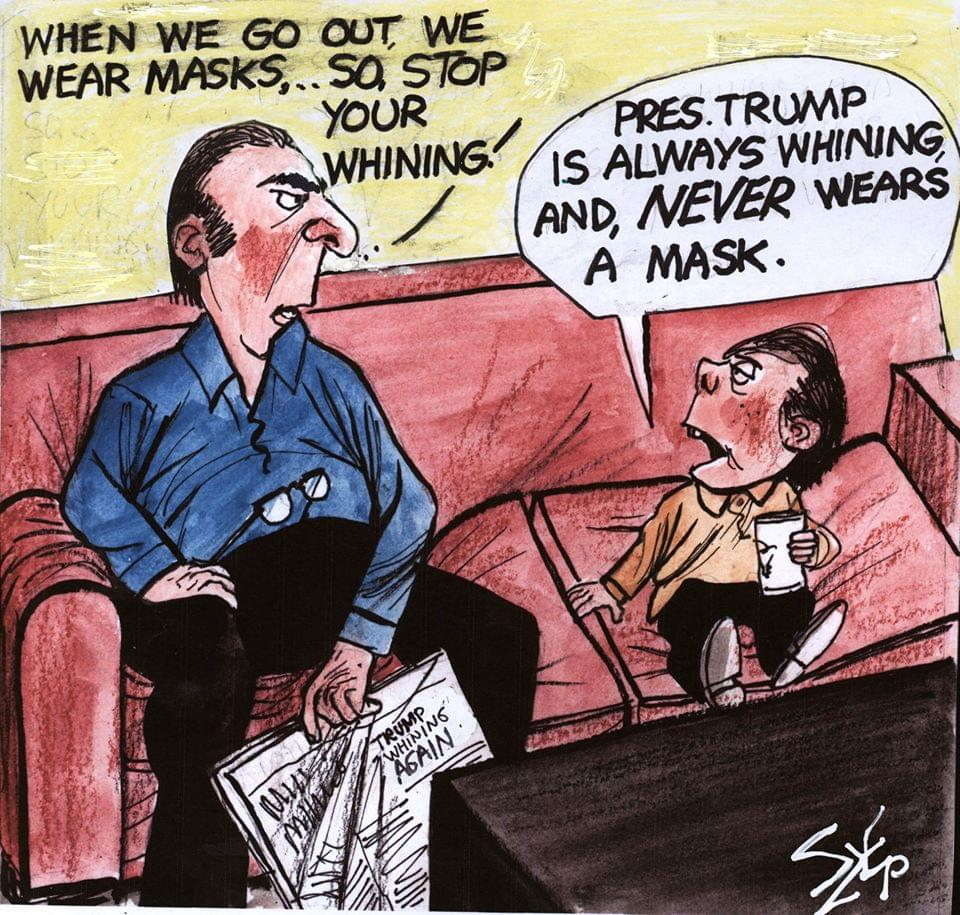 Social cohesion used to be a thing: 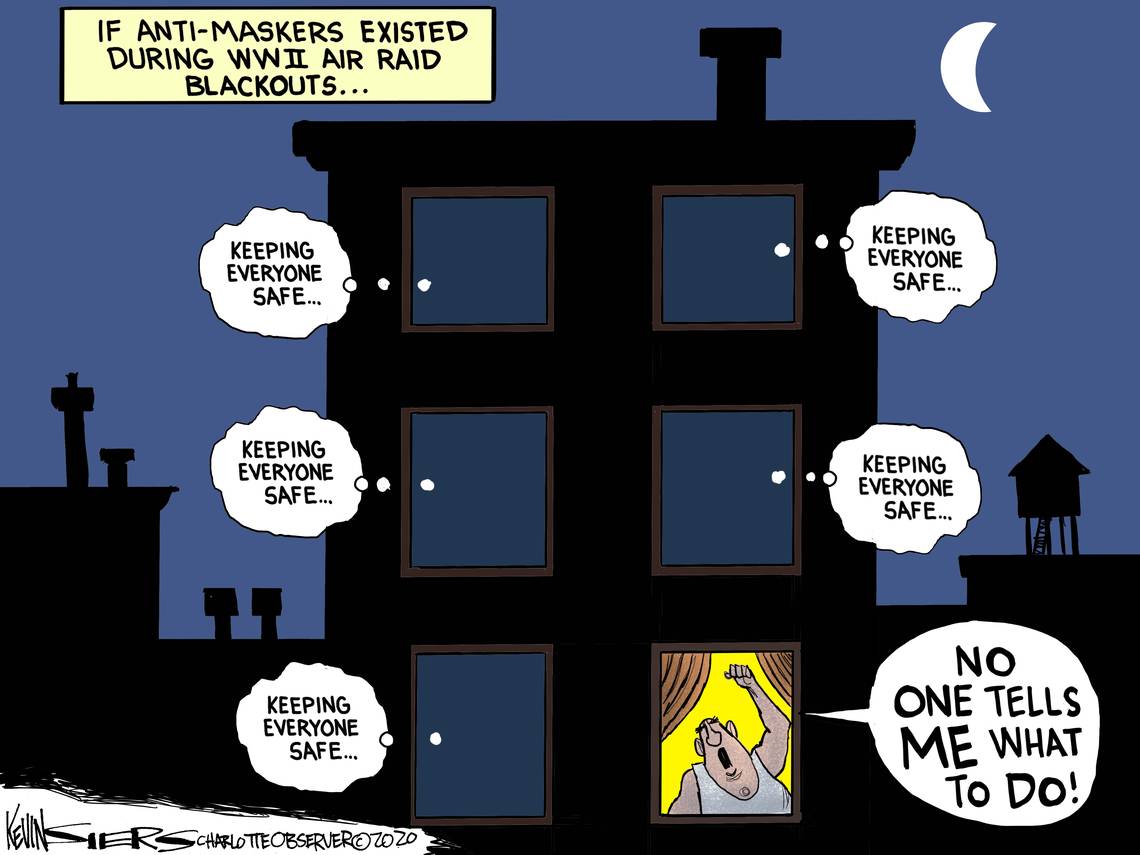 Trump demands churches reopen. Where will he be on Sunday? 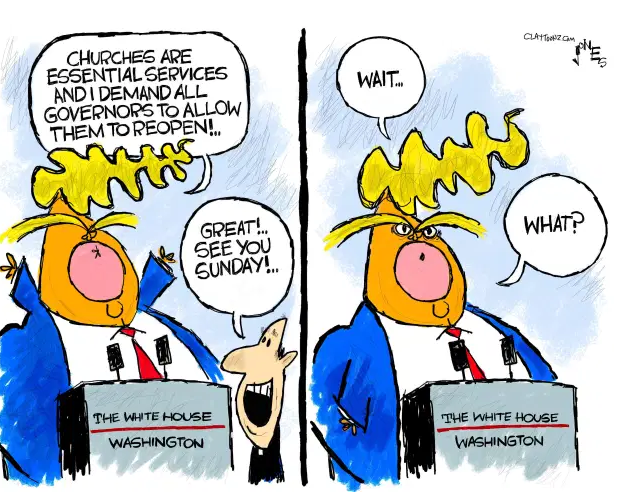 After WFH ends, will there be regrets? 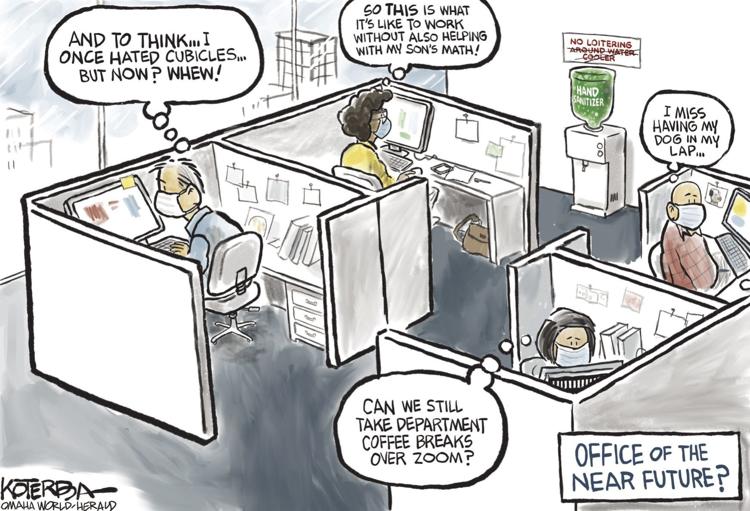 Biden’s doing great by doing nothing: 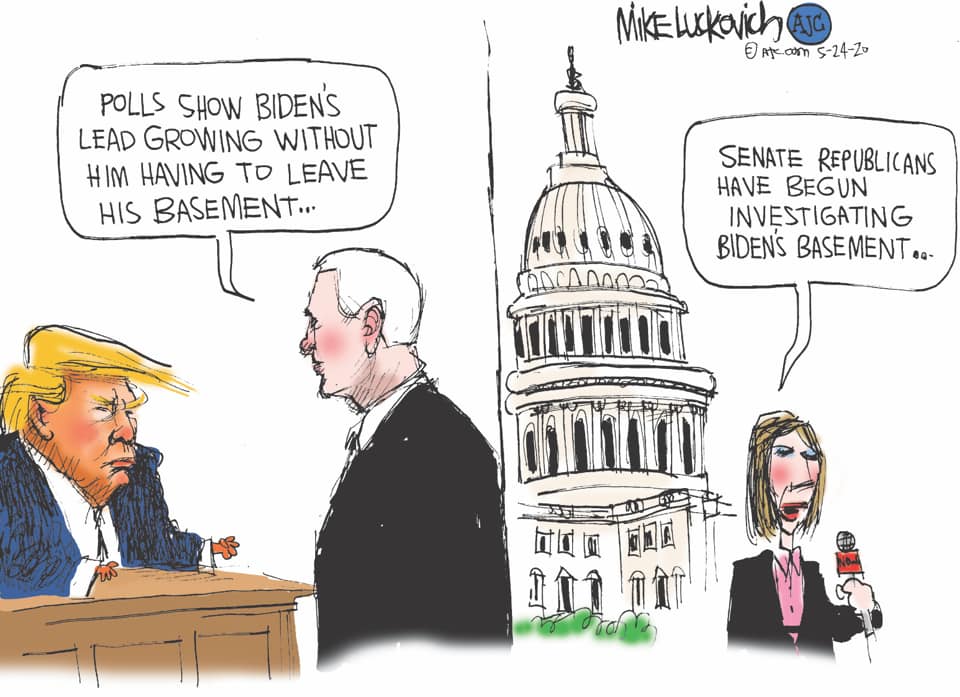 We shouldn’t get cocky. Remember that Trump “won” in 2016 when just 25.5% of eligible American voters voted for him. 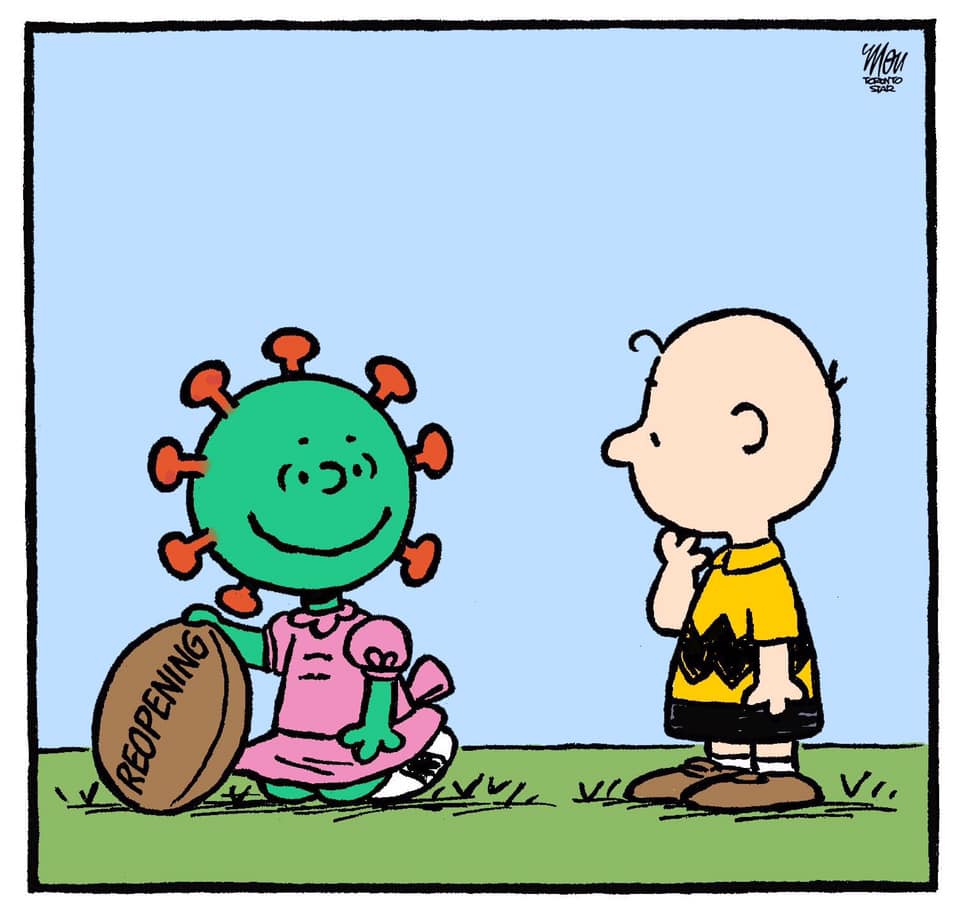 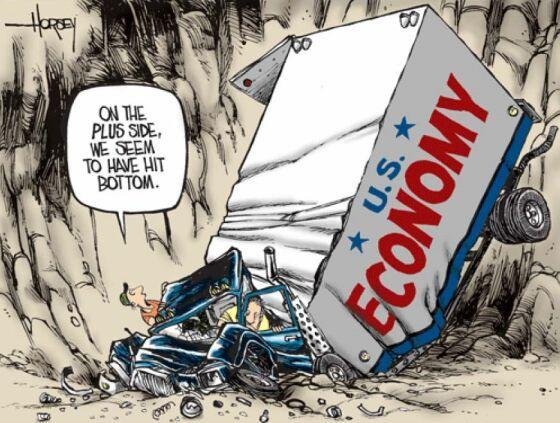 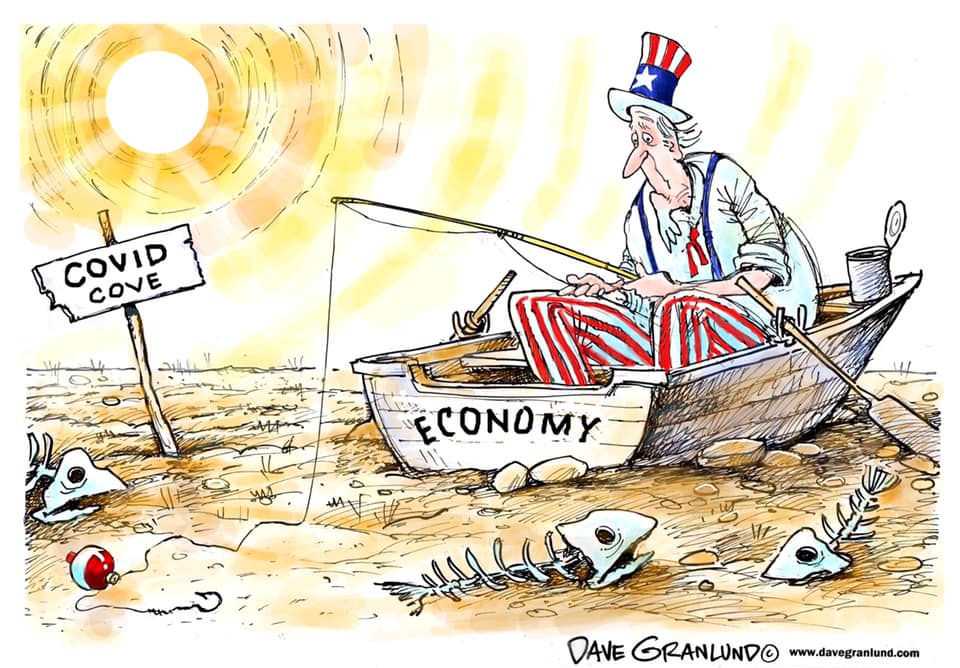 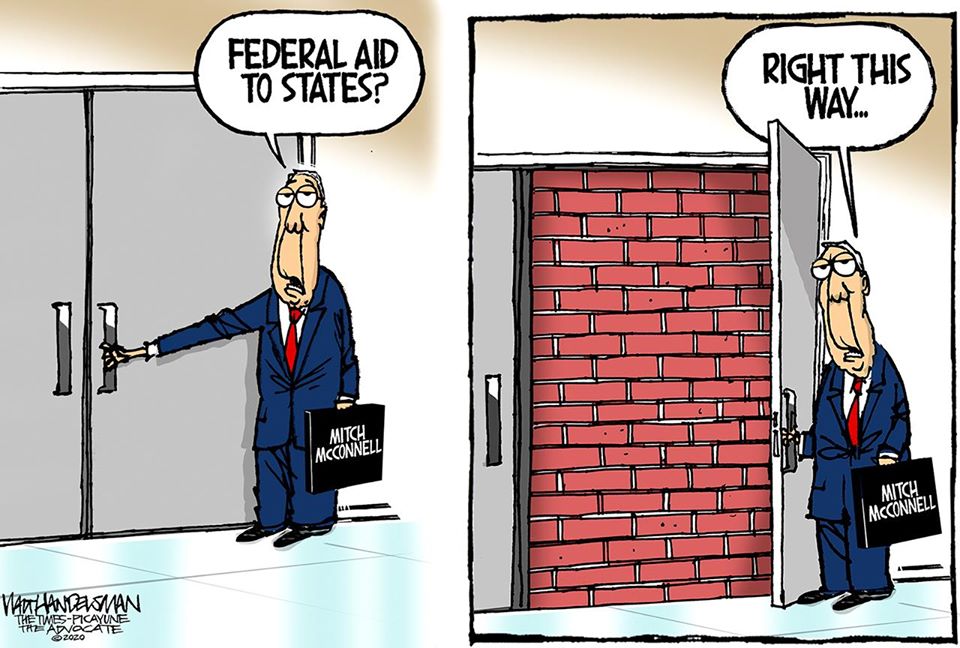 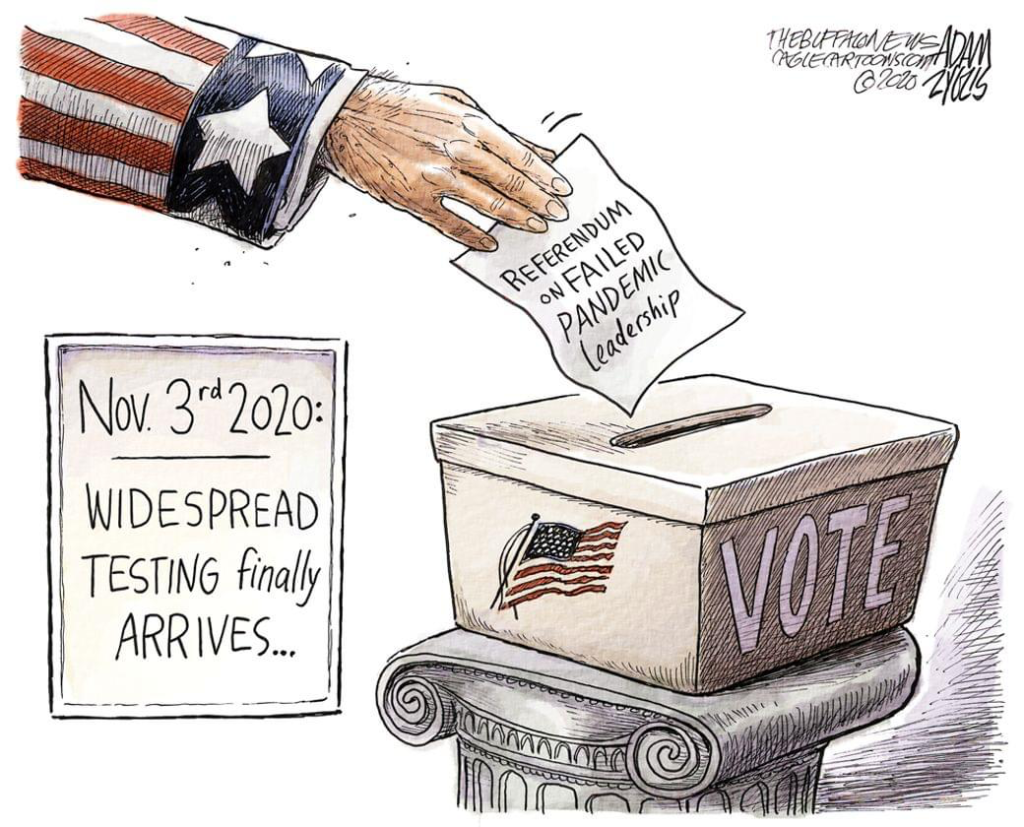 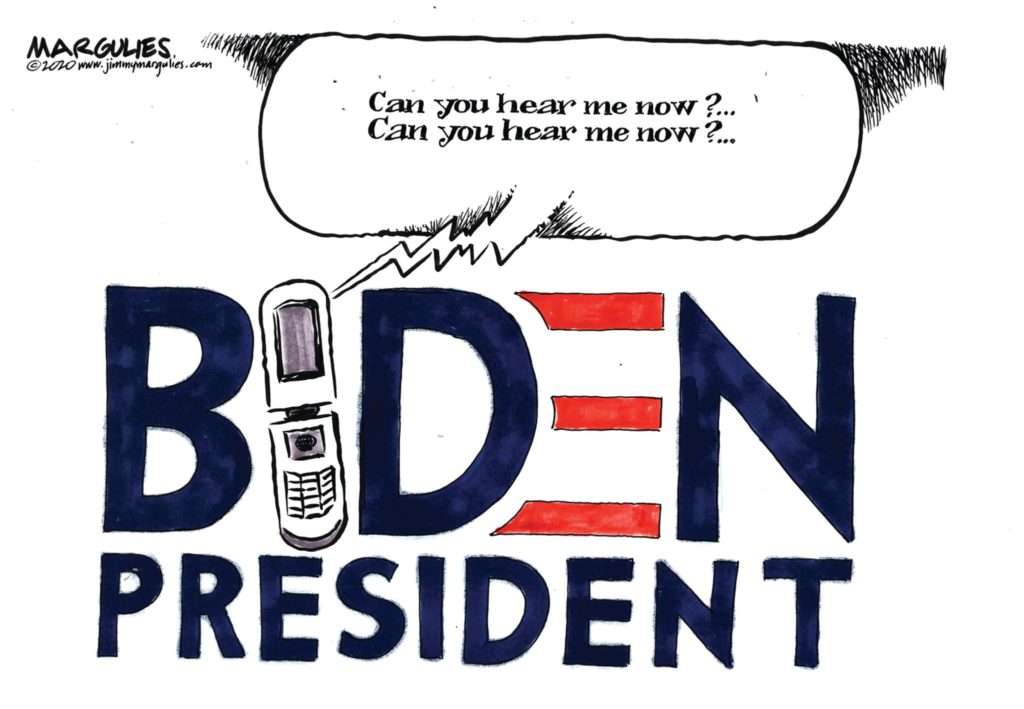 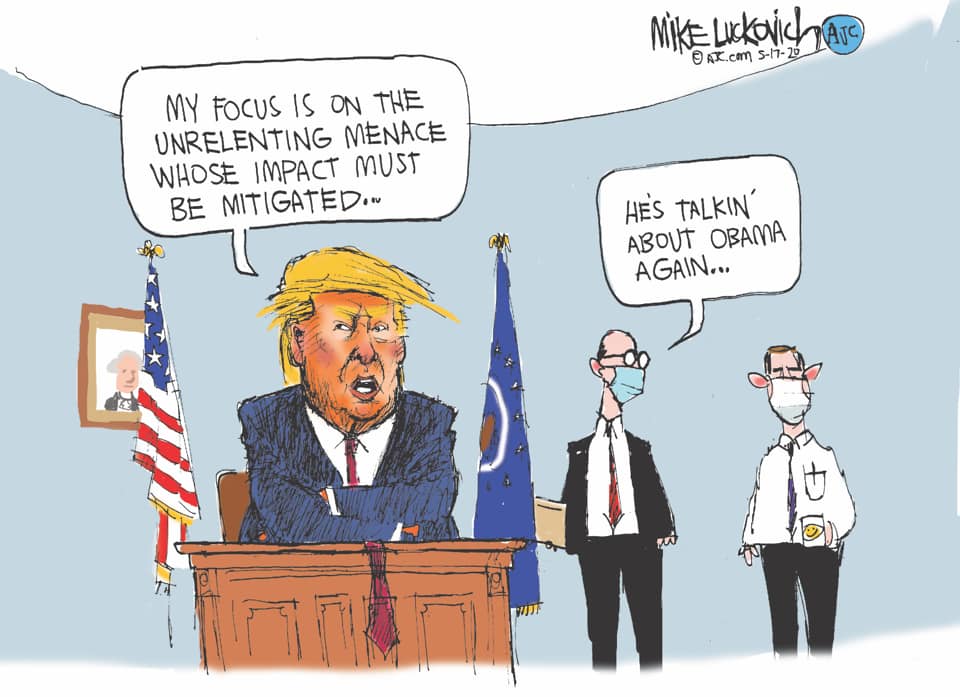 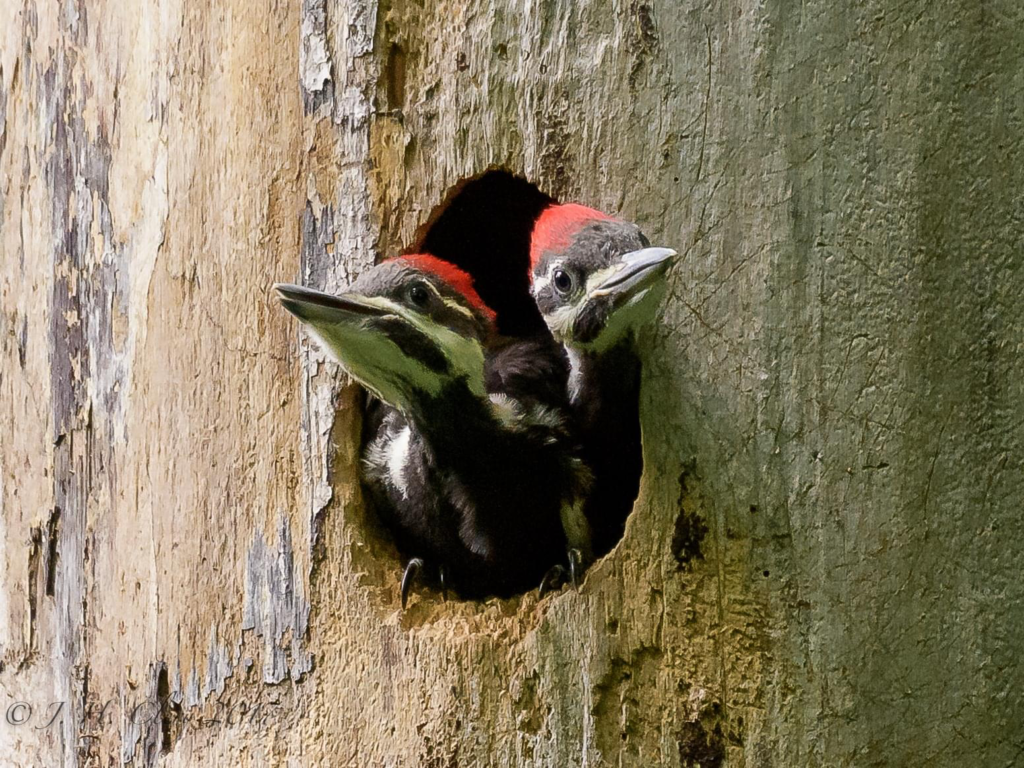 Americans are starting to peek out of their nests again. Governors have decided, and 30 of them are re-opening their states. Those states are not exclusively Republican; there are a few Democratic states too. The logic behind reopening is that of risk assessment and risk management. Somewhere between prudence and overreaction lies today’s American toxic politics.

We judge risk versus gain for everything, including for other causes of death. We try to model healthy behaviors. Most of us wear seatbelts, most watch our diets, and have stopped smoking years ago.

We also have to judge the risks associated with whether to end, or continue the lockdown. That means deciding which steps to take that will minimize both the spread of the virus, along with minimizing the crushing economic hardship being experienced by many Americans.

Ignore that the government isn’t currently taking care of healthcare and housing if you are unemployed.

The lockdown could go on for much longer if the federal government was willing to underwrite living costs for those who are out of work, until such time as it was safe to go back to work. But they have no intention of doing that.

So, from the Trump perspective, the choice is clear: Businesses need to open and their workers need to go back to work, despite the risks. Their argument is that living with COVID-19 isn’t as risky as it seems. Twenty-two states have had fewer than 100 deaths. So far, only 15 of 50 states have had total deaths for the crisis that are higher than NYC’s current rate of 500 a day.

The original goal of lockdowns was to keep the health care system from being overwhelmed, and in the largest cities, that risk seems to be behind us. Whether that will be true in rural America where few hospitals operate, remains to be seen. Derek Thompson said in the Atlantic:

“This crisis represents an existential threat to America’s small businesses. Almost half of all job losses in April occurred in leisure and hospitality, where small businesses are overrepresented in companies like restaurants and stores. The decimation of small business would have long-lasting implications. It would destroy jobs that would be unlikely to return quickly, while creating a crisis of long-term unemployment.”

And all of those restaurants, cafés, theaters, community centers, and specialty shops that are part of the local fabric of our towns and villages could be wiped off Main Street. Losing many of them would be an economic tragedy. More from Thompson: (emphasis by Wrongo)

“The virus is real, the hospitalizations are real, the deaths are real, the need for masks and social distancing is real, the threat to millions of restaurants and shops is real, and the incomparable levels of unemployment are real, too. The White House plan to reverse this cavalcade of horrors is to “reopen” the economy. But 20 million Americans just lost their jobs in the past few weeks, not because the government shut down the economy, but because a pandemic scared millions of Americans into staying at home. There is plenty to be wisely afraid of, but Washington thinking that a pandemic economy is like a garage door that it can reopen by pressing a button might be the scariest thing of all.”

No one knows what will happen between now and Election Day. It’s not just a matter of businesses opening up. For people to go back to work, schools must be open, day care must be open, public transportation must be safe, and customers must show up.

Are you up for all of that?

It required an FDR to galvanize the country. Needless to say, neither Trump nor the Republican Party have the desire to provide that leadership. They will be every bit as uncaring and incompetent at rebuilding our economy as they have been at stopping the pandemic.

To help you wake up, listen to Guns ‘n Roses cover Paul McCartney’s “Live and Let Die” which played during Trump’s visit to an N95 mask manufacturing plant in Phoenix:

Remember all of this in November.