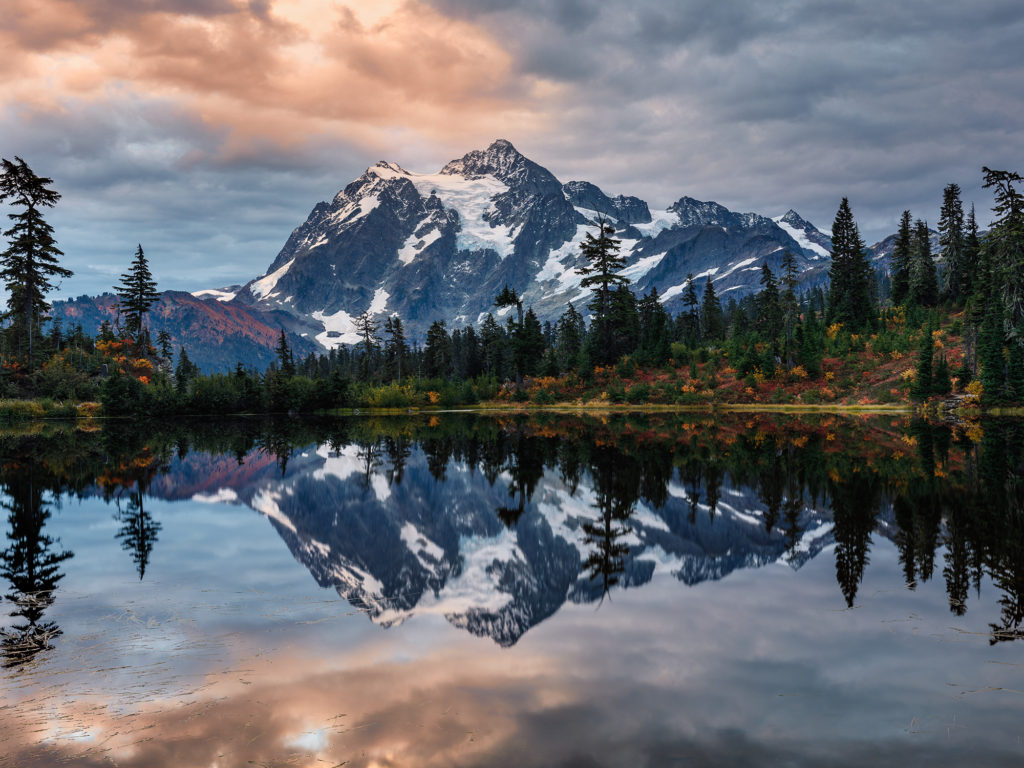 “You go to impeachment with the Mitch McConnell you have, not the one you want.”

We need to remember the history of how Democrats created the Mitch we have. To do that, we must go back to November 21, 2013. Here’s the WaPo from that day: (emphasis by Wrongo)

“Senate Democrats took the dramatic step Thursday of eliminating filibusters for most nominations by presidents, a power play they said was necessary to fix a broken system but one that Republicans said will only rupture it further.

Democrats used a rare parliamentary move to change the rules so that federal judicial nominees and executive-office appointments can advance to confirmation votes by a simple majority of senators, rather than the 60-vote supermajority that has been the standard for nearly four decades.

The immediate rationale for the move was to allow the confirmation of three picks by President Obama to the U.S. Court of Appeals for the District of Columbia Circuit — the most recent examples of what Democrats have long considered unreasonably partisan obstruction by Republicans.”

Back then, the main combatants were Harry Reid (D-NV) the Majority Leader, and Minority Leader Mitch McConnell (R-KY). The vote for the “nuclear option” was 52 to 48, with all but three Democrats backing the move, and every Republican opposing it. After the vote, Obama said that Republicans had turned nomination fights into a “reckless and relentless tool” to grind the gears of government to a halt and noted that “neither party has been blameless for these tactics.” But, he said, “today’s pattern of obstruction…just isn’t normal; it’s not what our founders envisioned.”

Today, 20% of judges on all of the federal courts, and 25% on the appeals courts are Trump appointees. On the same day that Trump was impeached, the Senate confirmed 13 new district court judges.

Suddenly, Democrats are waking up to the reality that Trump’s judges will shape American law with a conservative bias for 30-40 years to come.

We can blame Harry Reid and Barack Obama for not thinking ahead.

You ought to be thinking ahead to the weekend, and all of the little things that you need to do so that Santa can do his job next week. It’s at least as challenging a task as locating the missing Trump Impeachment.

Before you shift into drive and start on that big to-do list, it’s time for a Saturday Soother, a brief few moments when you relax, and try to center yourself in the calm before the storm.

Start by brewing up a mug of Coffee and Chicory coffee ($6.70/15oz.) from New Orleans’ own Café Du Monde. Now sit back in a comfy chair and watch and listen to a Holiday Season flash mob by the US Air Force Band at the National Air and Space Museum in 2013:

The majority of Americans under 18 live in households that receive “means-tested assistance” from the US government. In 2016, according to the most recent data from the Census Bureau, there were approximately 73,586,000 people under 18 in the United States, and 38,365,000 of them, 52.1%, resided in households in which one or more persons received benefits from a means-tested government program.

And when the Census Bureau excluded school lunch programs from its calculations, the percentage of those under 18 who lived in a household receiving means-tested assistance (44.8%), still exceeded the percentage in any other age bracket.

We have now had four straight years: 2013 – 2016, during which a majority of those under 18 lived in a household taking means-tested benefits.

The primary reason for this is that most in this category are single parent households headed by a woman. Many can’t find employment paying a decent wage with some benefits. Many have to choose between full-time work and childcare. Some are working 2-3 part time jobs but still can’t cover their expenses.

But, the economy is good, the stock market is great, so why worry about these banana republic statistics, America? On to cartoons. 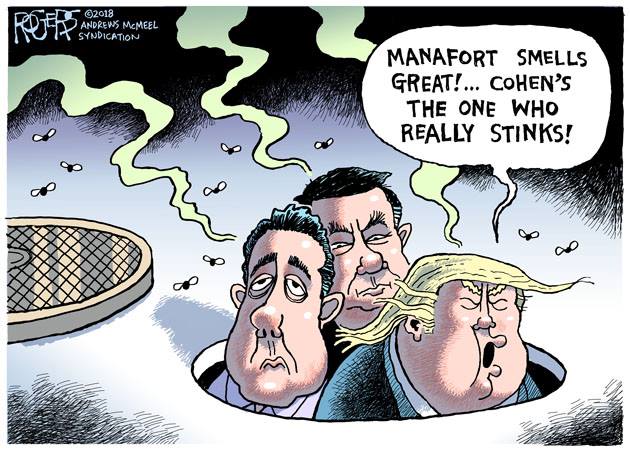 Speak to a Trumpist, and you’ll find a reasonable, fact-driven human being: 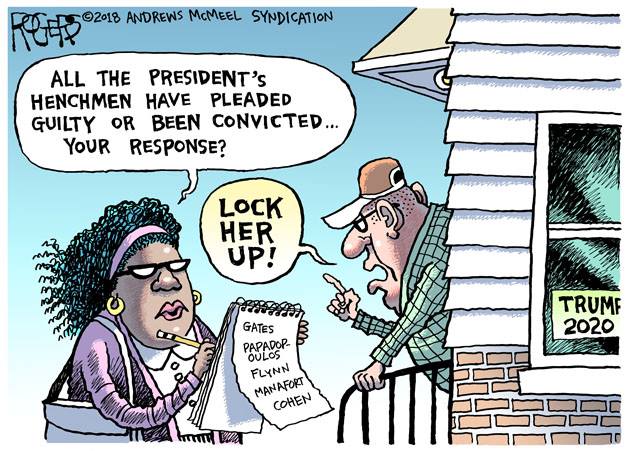 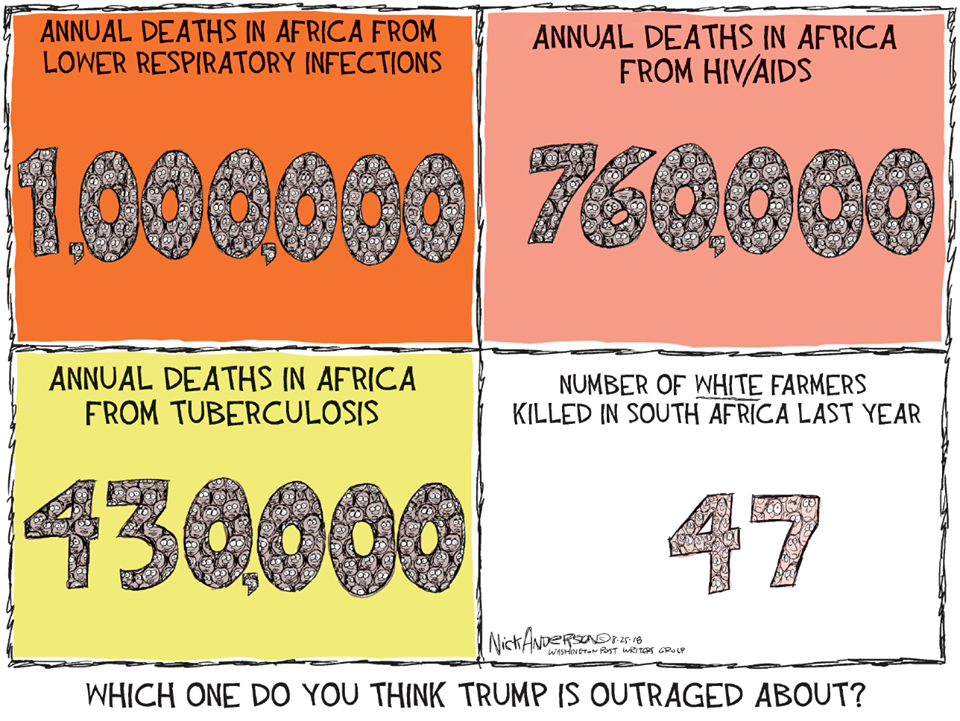 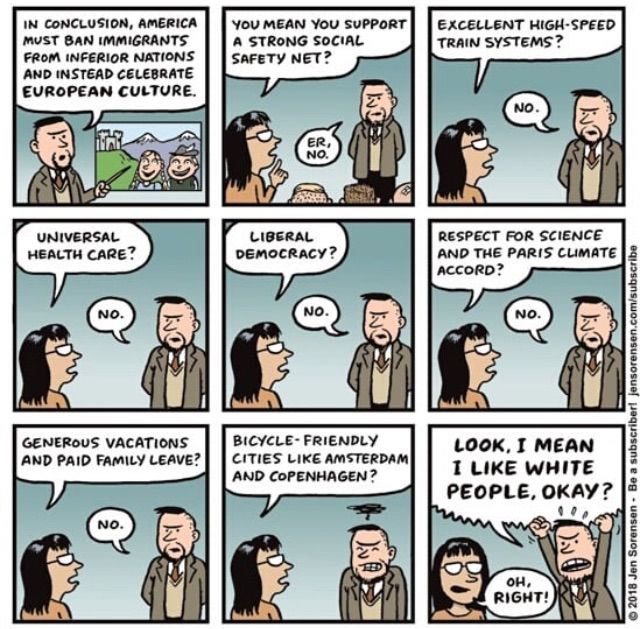 DeVos shows that she’s a helper: 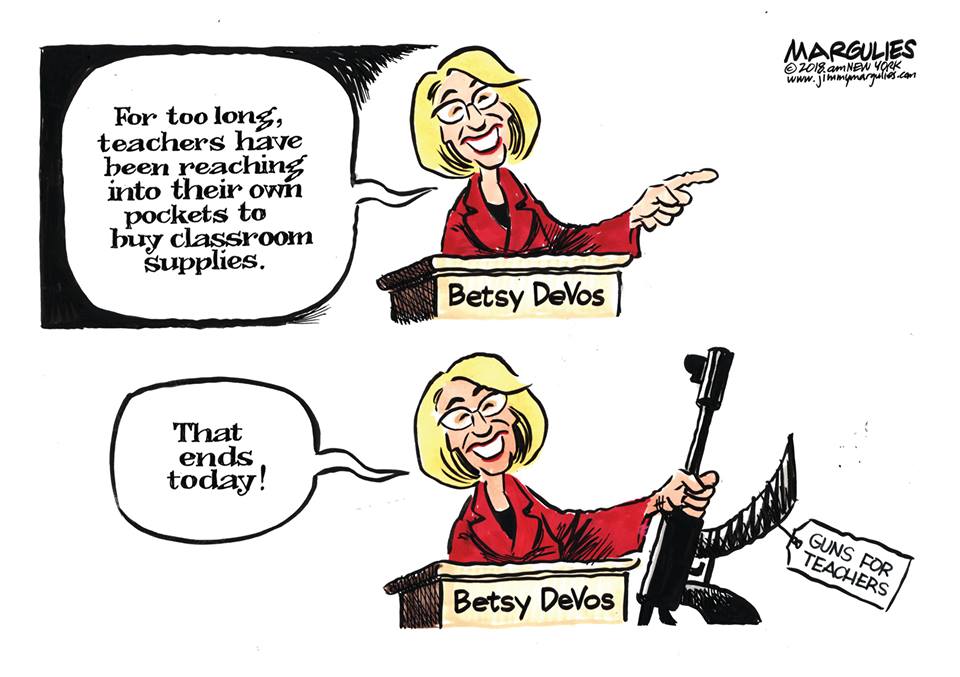 Mitch reserves his looks of disgust only for Democrats: 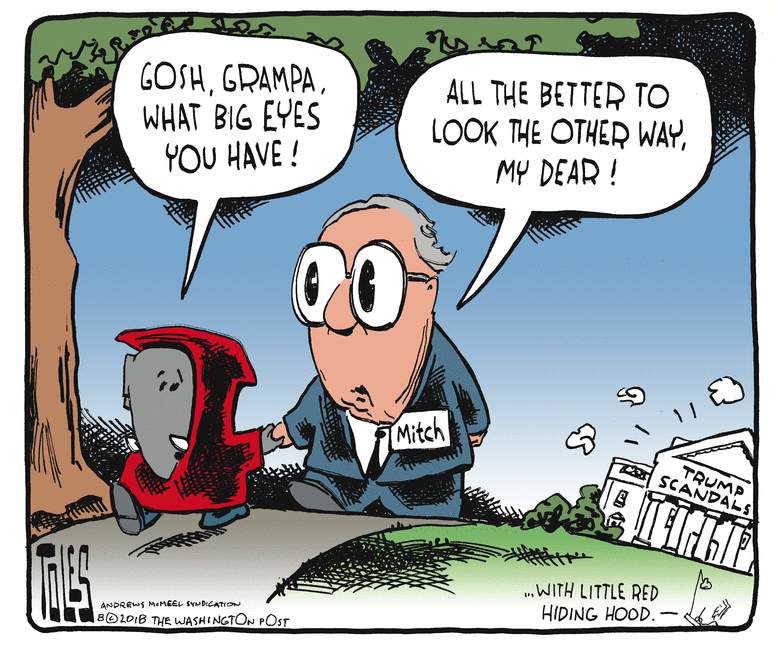 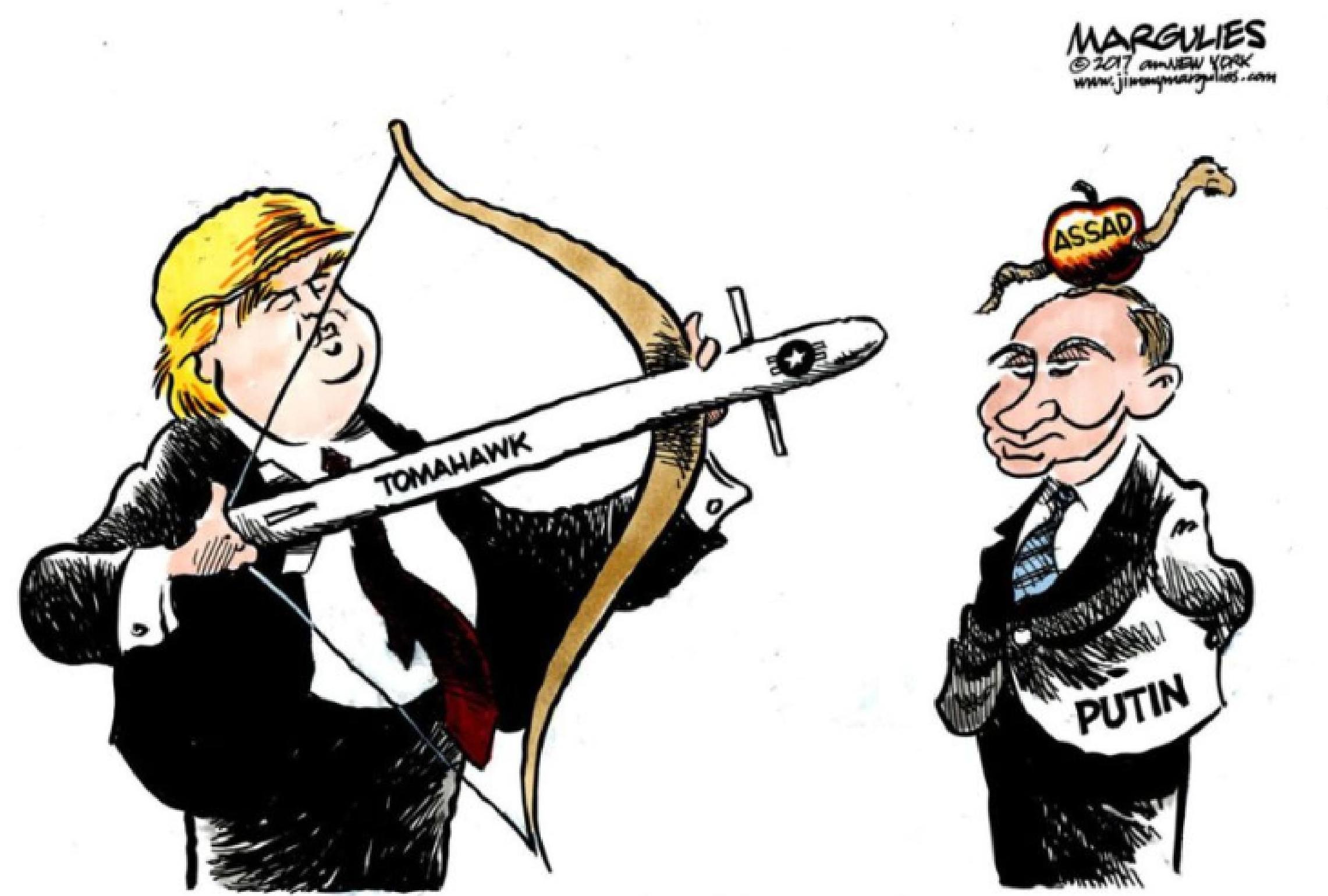 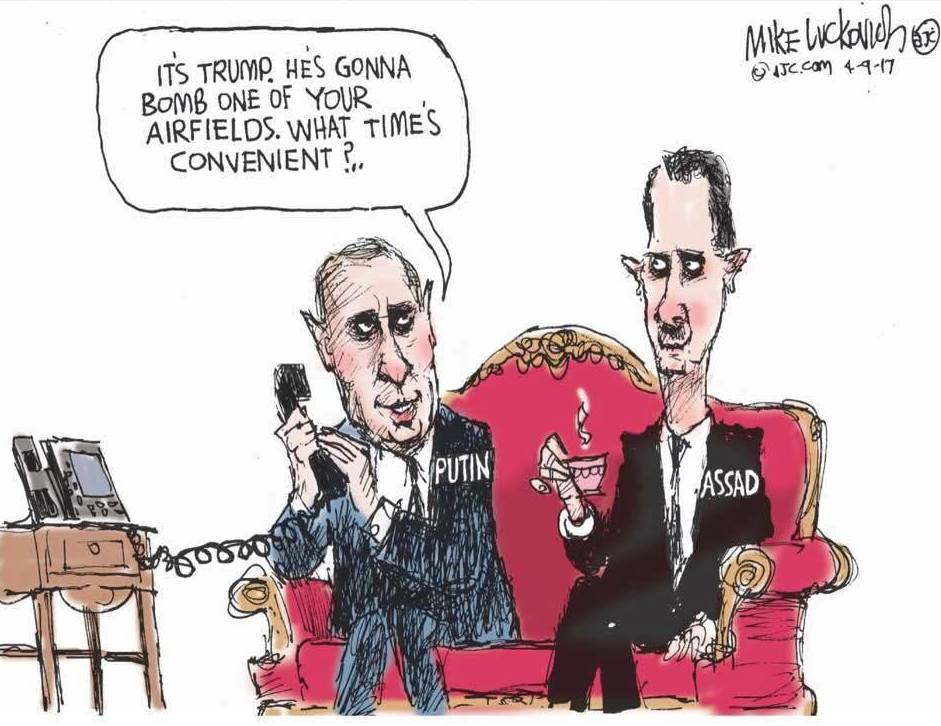 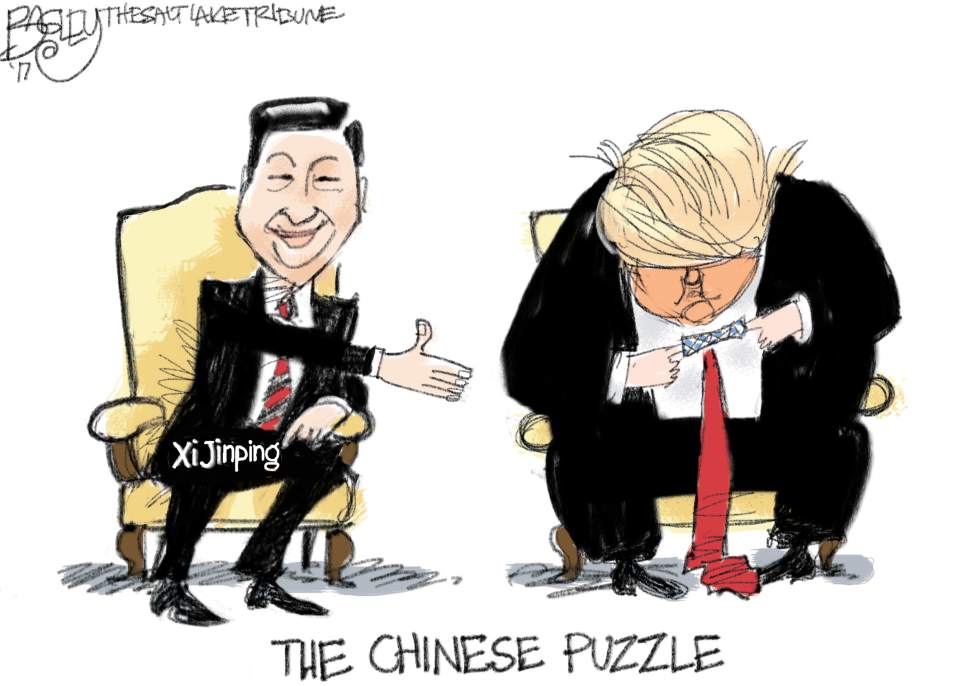 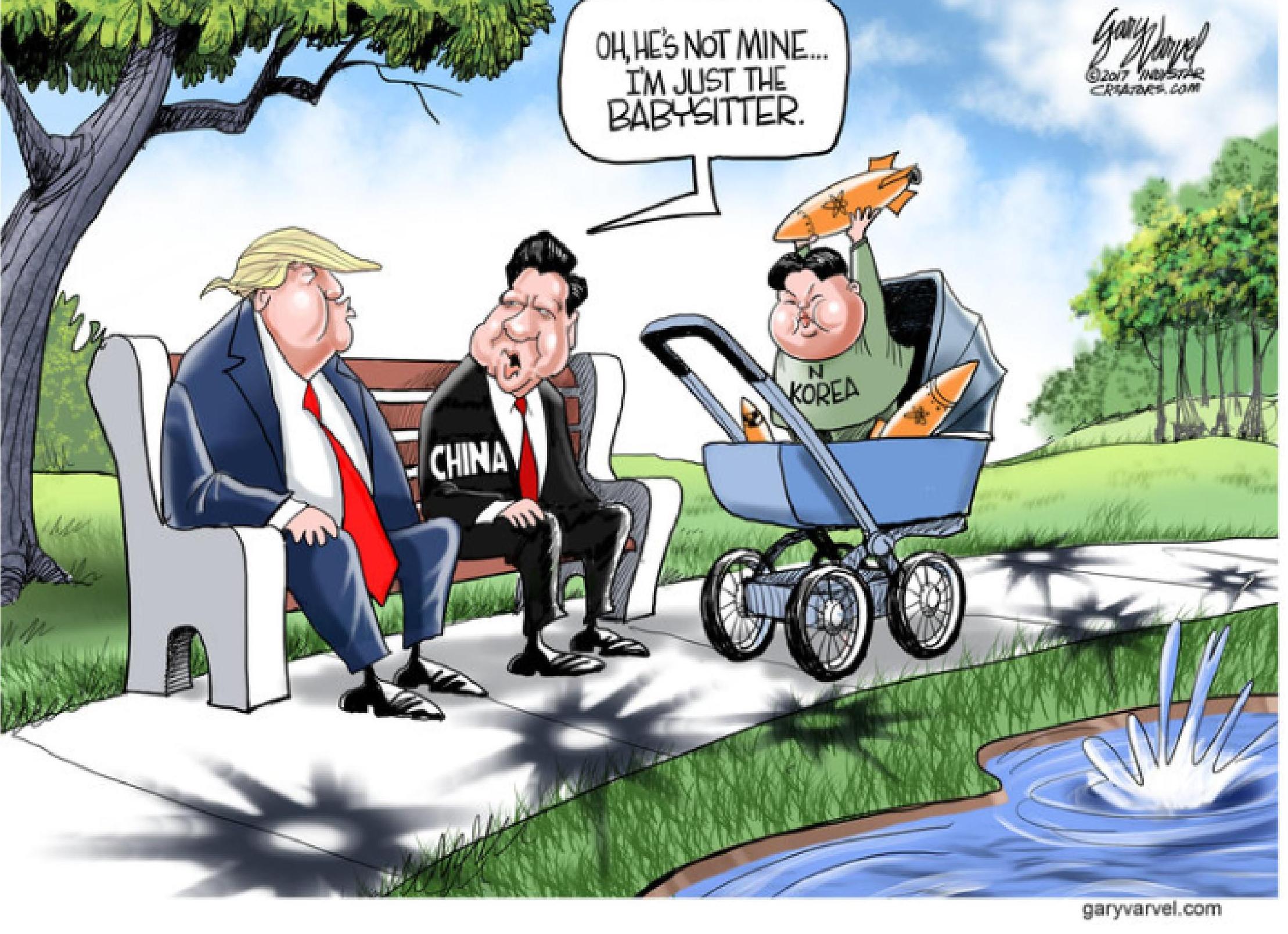 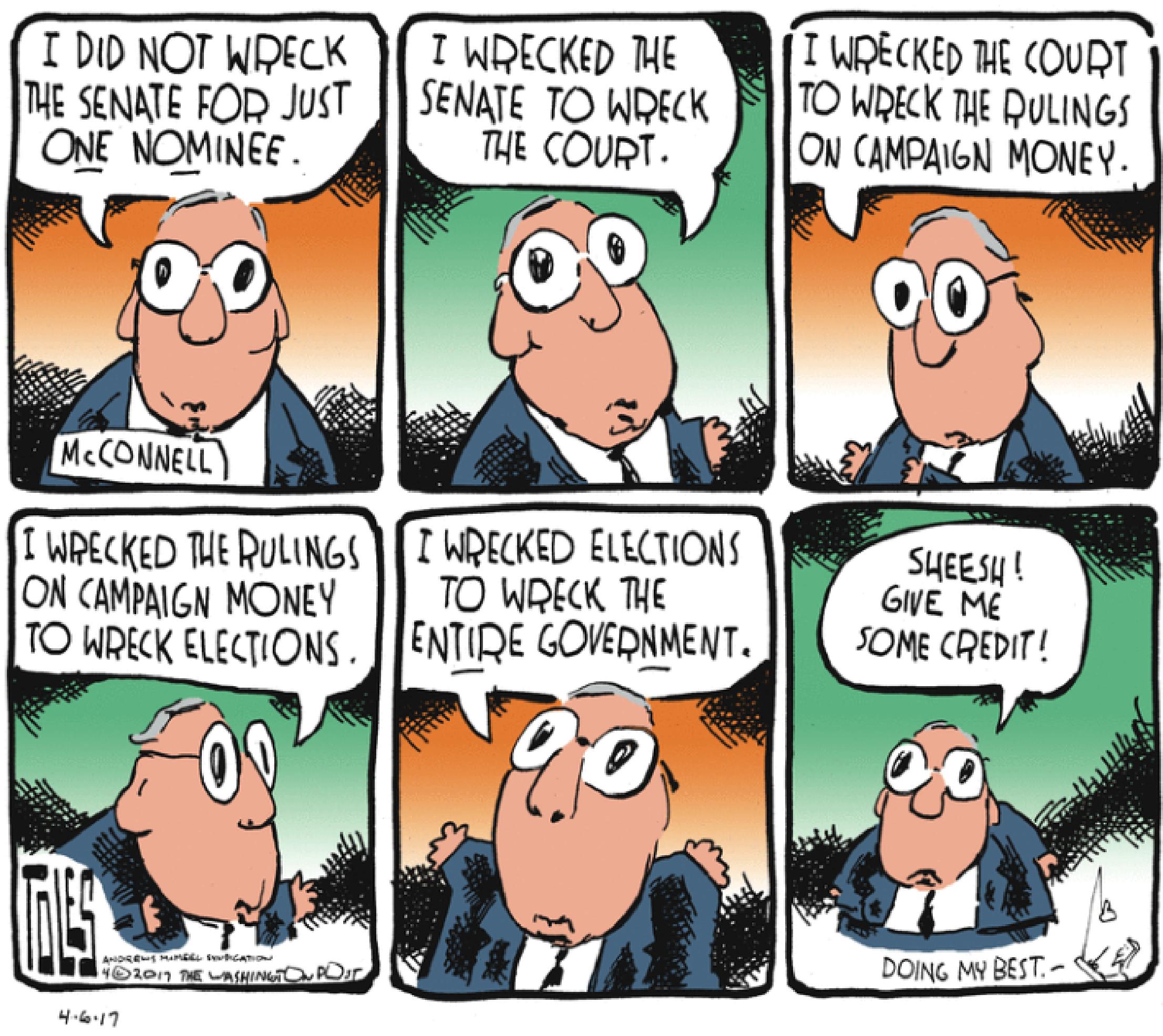 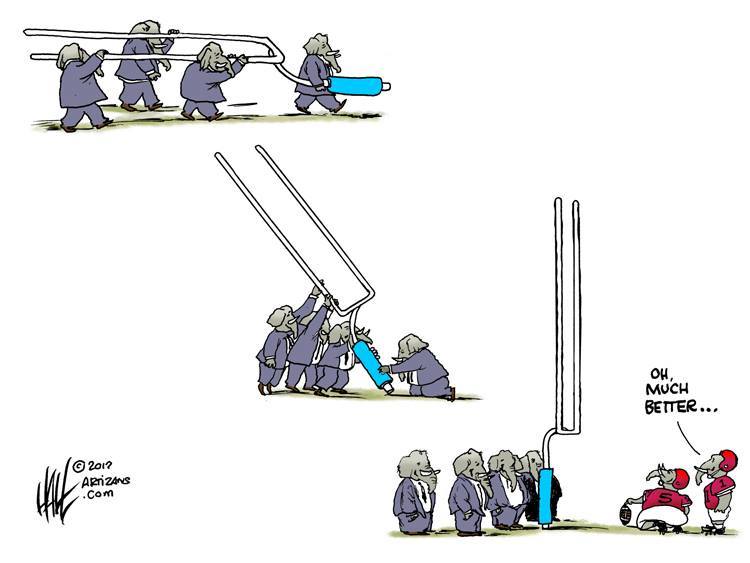 (Scroll to the bottom of the page for the Daily Escape)

Senate Majority Leader Mitch McConnell (R-KY) rose on Tuesday and objected to a speech Sen. Elizabeth Warren (D-MA) was giving in opposition to the nomination of Sen. Jeff Sessions (R-AL) as attorney general.

McConnell took particular issue with Warren as she quoted a letter written by Coretta Scott King, Martin Luther King Jr.’s widow, when Sessions was under consideration for a federal judgeship in 1986.

McConnell invoked the little-used Rule XIX, which says that “No Senator in debate shall, directly or indirectly, by any form of words impute to another Senator or to other Senators any conduct or motive unworthy or unbecoming a Senator.” King’s letter argues that, during Sessions’ time as a prosecutor in Alabama, “Mr. Sessions has used the awesome power of his office to chill the free exercise of the vote by black citizens.” It was that portion of the letter that McConnell read back to the presiding officer, arguing that it was over the line.

The Republican presiding in the chair, Sen. Steve Daines of Montana, agreed with McConnell, ruling her in violation of the order and forcing her to sit down.

“I am surprised that the words of Coretta Scott King are not suitable for debate in the United States Senate,” Warren replied.

It seems the voices of both Sen. Warren and the late Coretta Scott King are now unwelcome in the Senate’s old boys’ club, even though Ms. King’s words were placed in the Senate’s records 30 years ago. This from Booman: (emphasis and brackets by the Wrongologist)

Rule 19 is a good rule that helps prevent canings on the Senate floor. But it really should never apply to a senator who is under consideration for confirmation to another office. If Warren and Merkley were reading these historical documents just to make Sessions look bad while they were arguing over the budget that would be a legitimate violation of the rules. But these documents [King’s letter] were germane to Sessions’ fitness for the office of Attorney General in the same way that his tax returns and voting record are germane.

Republicans regularly call their opponents corrupt traitors. The NYT reports that both Sen. Ted Cruz (R-TX) and Sen. Tom Cotton (R-AK) appear to have violated the rule according to its true intent, without having it invoked against them. In 2015, Cruz called McConnell a liar. But he’s a Republican man, while Sen. Warren is out of line for quoting the widow of a titan of American history. Got it.

Apparently McConnell thinks that a Senator nominated for a Cabinet position isn’t a nominee. They remain a Senator, and the ability of other Senators to criticize their nomination is subject to Rule 19. That is a misuse of the rule, and McConnell abused his power. And he did more to raise awareness about Sessions’ racist past than he did to safeguard Sessions’ “character.” Republicans know that Warren’s Senate performances have a long afterlife on YouTube, so they tried to prevent another one, but failed.

Had they let her read it, it would have been seen by only a few thousand late night C-SPAN watchers. Instead, her Facebook video reading the Coretta Scott King letter had 7.8 million views by Wednesday afternoon.

The GOP’s self-inflicted wound is shutting down a white woman reading a letter written by a black woman who lost her toweringly famous husband in the struggle for equality, a letter which criticized the racism of a Southern white man, during Black History Month. The Oregonian reported:

Hours after GOP leaders blocked Sen. Elizabeth Warren from reading a letter critical of Sen. Jeff Sessions during his confirmation hearing for attorney general, Sen. Jeff Merkley picked it up and read the document uninterrupted.

So, after they shut down one Democratic Senator, McConnell allowed a different Democrat to read the letter? What’s the difference? 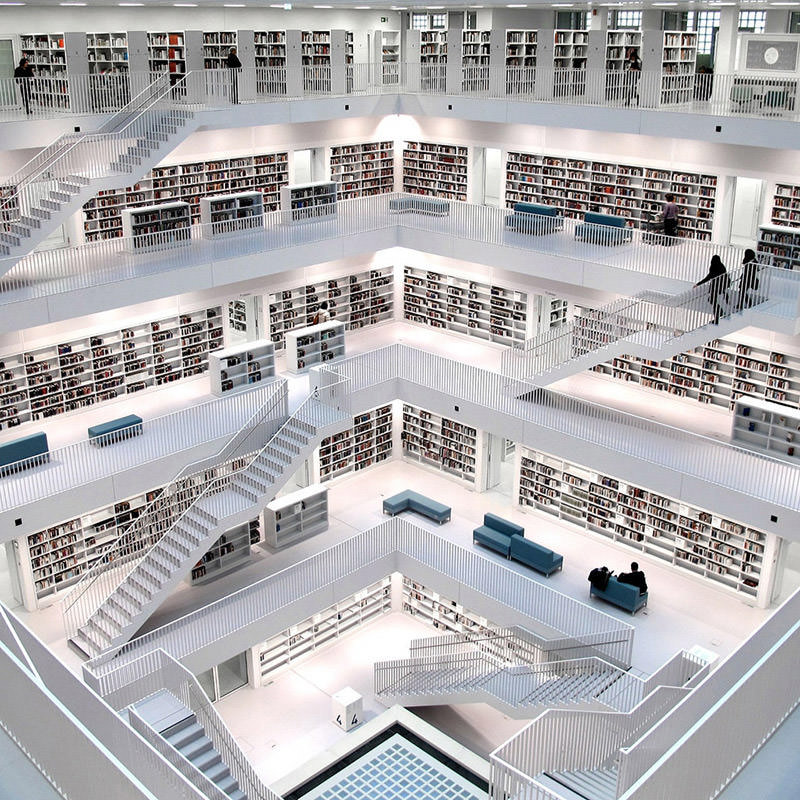