Nearly 130 years ago at the height of the Gilded Age, President Hayes had it right. Capitalism then was an economic free-for-all. Today, capitalism again is rewarding too few people. And data show that the problem is worse than we thought. The WSJ reported on a study by economists from Stanford, Harvard and the University of California that found:

Barely half of 30-year-olds earn more than their parents did at a similar age, a research team found, an enormous decline from the early 1970s when the incomes of nearly all offspring outpaced their parents.

Using tax and census data, they identified the income of 30-year-olds starting in 1970, and compared it with the earnings of their parents when they were about the same age. In 1970, 92% of American 30-year-olds earned more than their parents did at a similar age. By 2014, that number fell to 51%. Here is a chart showing the results: 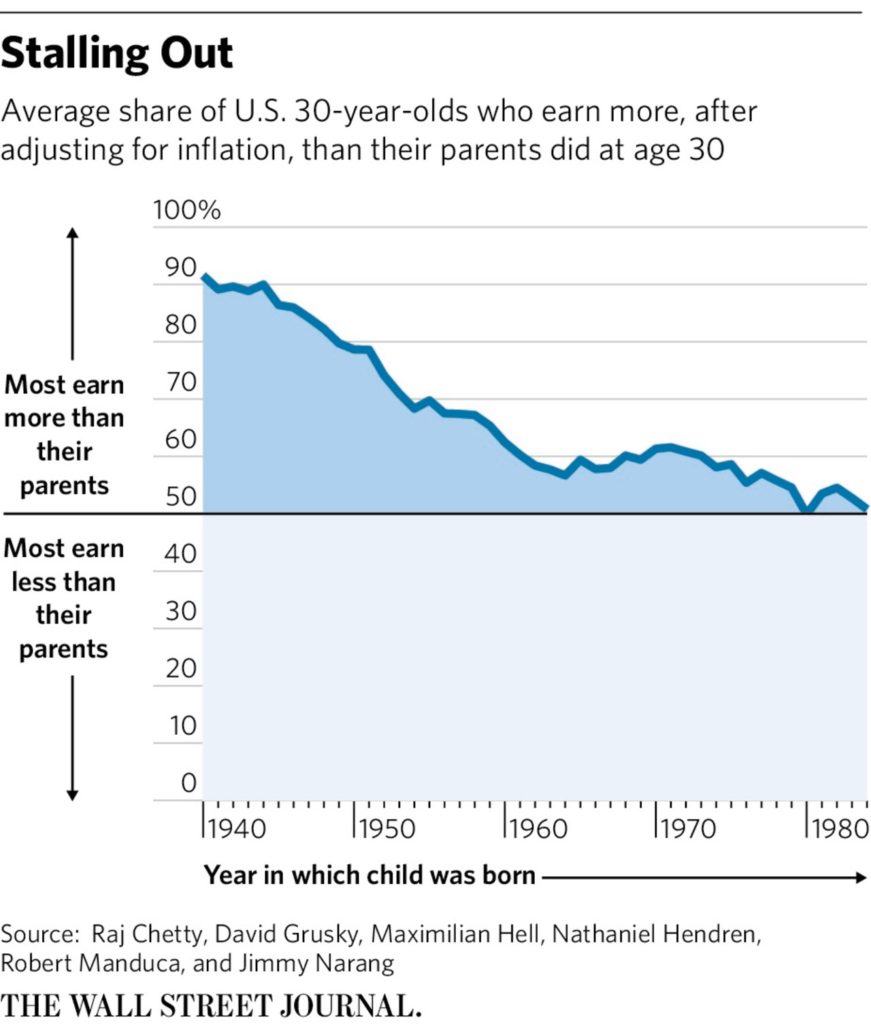 And we know that real median household income in the US today is basically the same as in 1989. The paper doesn’t provide specific reasons for the decline in incomes for younger Americans, but it generally blames slower economic growth and, especially, the rapidly widening income gap between the top 20% and the rest of society.

They found that the inability of children to out-earn their parents is greatest in the Midwest. This underlines that those who voted for Trump have a point: The Midwest has been hit harder by import competition, especially from Japan and China, and by technological changes, than other regions of the US.

When looking only at males nationally, the decline is even starker: In 2014, only 41% of 30-year-old men earned more than their fathers at a similar age.

There are some issues with the study worth mentioning: Most kids born in the 1940s did well in their thirties, maybe because their parents were 30 during the Depression and WWII. By the 1960s, an industrialized economy brought significantly higher wages to 30 year olds. A high denominator in the ratio of parent’s income to child’s income (compared to the past) made it more difficult for succeeding generations to exceed their parents’ incomes.

The economy also has shifted in the past 30 years and is now service-based, as factories moved overseas, and automation became prevalent. This change swapped higher wage manufacturing jobs for mostly lower wage service jobs. That alone could make it all but impossible for young adults to hit the ratios that their parents did relative to their grandparents.

Maybe the American Dream didn’t die; it just never really existed in the sense of broadly-based income mobility. Have another look at the chart, upward mobility (as measured by making more than your parents) has been declining since the mid-1940s.

Why? Between rising globalization and rapid advances in automation, we now have more people than jobs. And no matter whom we elect, this trend will continue. Those manufacturing jobs are never coming back. Even in China, robots are now displacing workers in factories.

This is the most serious challenge capitalism has faced in the US. Without improving personal income, there will be fewer who can afford college, or afford to buy the things that capitalism produces. Low personal income growth puts sand in the gears of our economy.

The left offers a critique of contemporary global capitalism but no real practical alternative. Neither does the right, but their memes of America First, nostalgia for a golden (gilded?) age, and more tax cuts seem like less of a stretch than a Bernie Sanders-like frontal assault on capitalism.

No one in either party has a plan for a world in which robots displace the demand for labor on a large scale. And the under-30 cohort is now spending at least 4 times more (in the case of Wrongo’s university, 10 times) for a college education than what their parents paid, and they are earning less.

If people matter at all to our leaders, and if 90+% of them lack the means to live without working, America must make employment our top priority, despite the fact that many have been deemed redundant by capitalists in the private sector.

Surplus labor drives the price of labor down; allowing the employer class to afford a pool boy, or a nanny, or another cook.

And it makes the waiters more attentive to Mr. Trump.