Apologies for the lack of posts, but it wasn’t a good week at the Mansion of Wrong. We said goodbye to Ms. Right’s favorite dog, the 15 year-old Havanese, Tuxedo. Tux lost his two-year battle with congestive heart failure. He was a brave little boy right to the very end.

Here is a picture of Tux when he was young, with his favorite yellow ball: 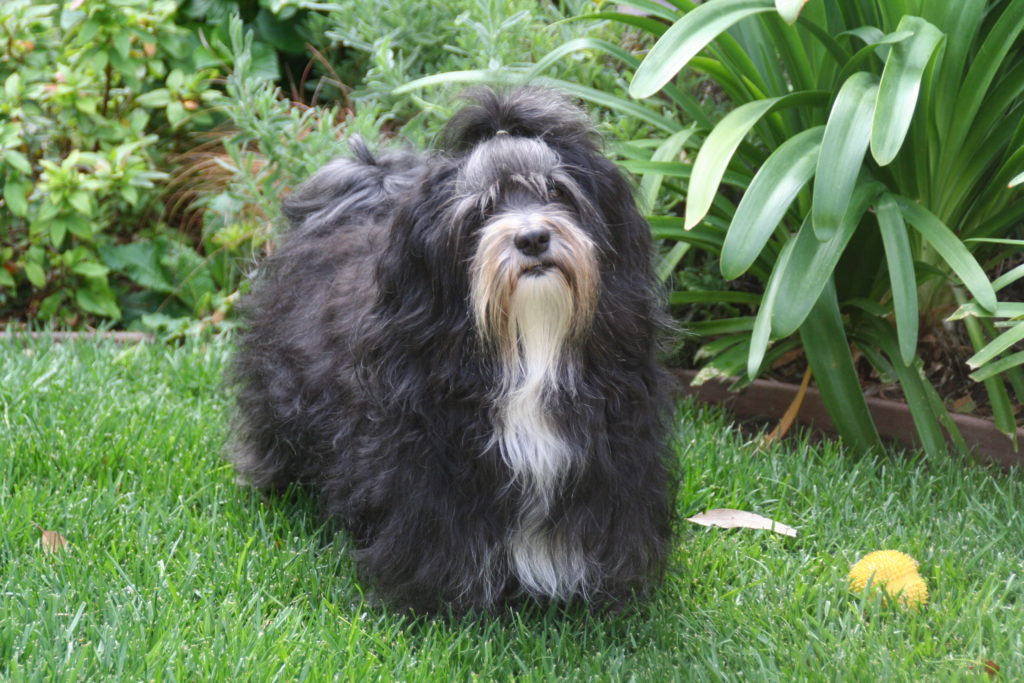 Tuxedo in California – 2007 photo by Wrongo

All in all, another week filled with big issues: Toddler care by government contractors, a real trade war, and the World Cup without a US team. But let’s focus on small, but significant indignities. From Thursday’s Bangor Daily News:

US Customs and Border Protection agents set up a checkpoint Wednesday on Interstate 95, stopping drivers and asking them questions about their citizenship before letting them proceed.

Agents set up cones narrowing the highway to one southbound lane, and then asked vehicle occupants about their citizenship. One agent was quoted as saying:

If you want to continue down the road, then yes ma’am. We need to know what citizen — what country you’re a citizen of…

When questioned about what would happen if a driver declined to answer, he said the car would only be able to keep going if, after further questioning and in the agent’s judgment, “the agent is pretty sure that you’re US citizens.”

These same border agents perform immigrant checks at Maine bus stops, where agents have been captured on video asking riders about their citizenship. More from the Bangor News:

In recent months, the bus stop checks have come under fire from the Maine American Civil Liberties Union, which is suing the federal agency for records to learn more about the practice. Lawyers for the Maine ACLU said they have questions concerning “the intrusive operation,” and whether it infringes on the Fourth and Fifth Amendment rights of bus passengers.

People have the right to be free from unreasonable searches and seizures, whether at a bus station or on the road.

Bill of Rights? We have no stinkin’ rights where Homeland Security is concerned. The tradeoff is to accept that immigrants, or possibly, terrorists, could make their way into the US from the enemy outpost of Canada. They could be infiltrating America.

For that, we are giving away the Constitution.

This isn’t some abstract abuse of internet privacy rights, these are uniformed federal government agents rousting people to produce their papers. Americans shouldn’t be required to answer questions about their comings or goings, unless law enforcement has probable cause to believe a violation of the law has occurred.

Stopping people for no reason is against the Constitution. It must be called out, and should be stopped immediately. We should not have to answer to anyone while driving down the roads our taxes pay for.

These are shock troops, exercising government power in a direct, one-on-one way. Let’s close with a cartoon that can’t wait until Sunday to be seen: 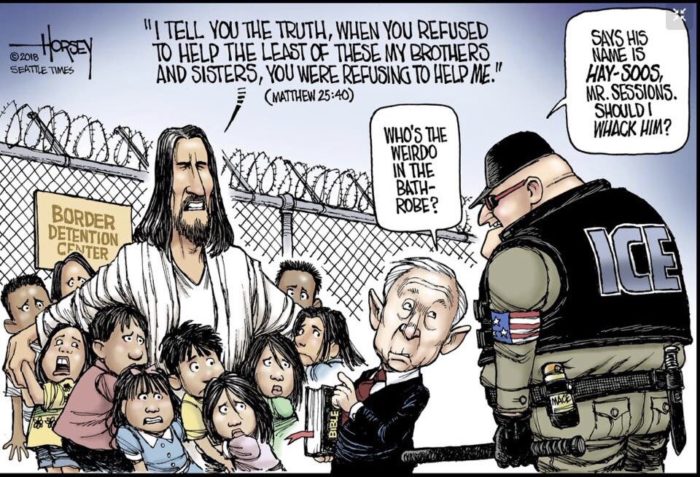 Another tough week. Unplug from the web and social media, it’s a time to cherish those closest to us, and to spend a little time away from the world.

Start by brewing a vente cup of Nicaragua Jinotega (Dark Roast) coffee ($13/12 oz.) with its bold and toasty notes, from Connecticut’s own Sacred Grounds Roasters.

Take your hot steaming cup outside, where you can hear the birds singing, maybe hear a distant lawn mower, and get comfortable. Now, listen to Aaron Copland’s “Quiet City” with solo trumpet by Winton Marsalis, backed by the Eastman Wind Ensemble. It is from the album, “Works by Copland, Vaughan Williams, and Hindemith”: 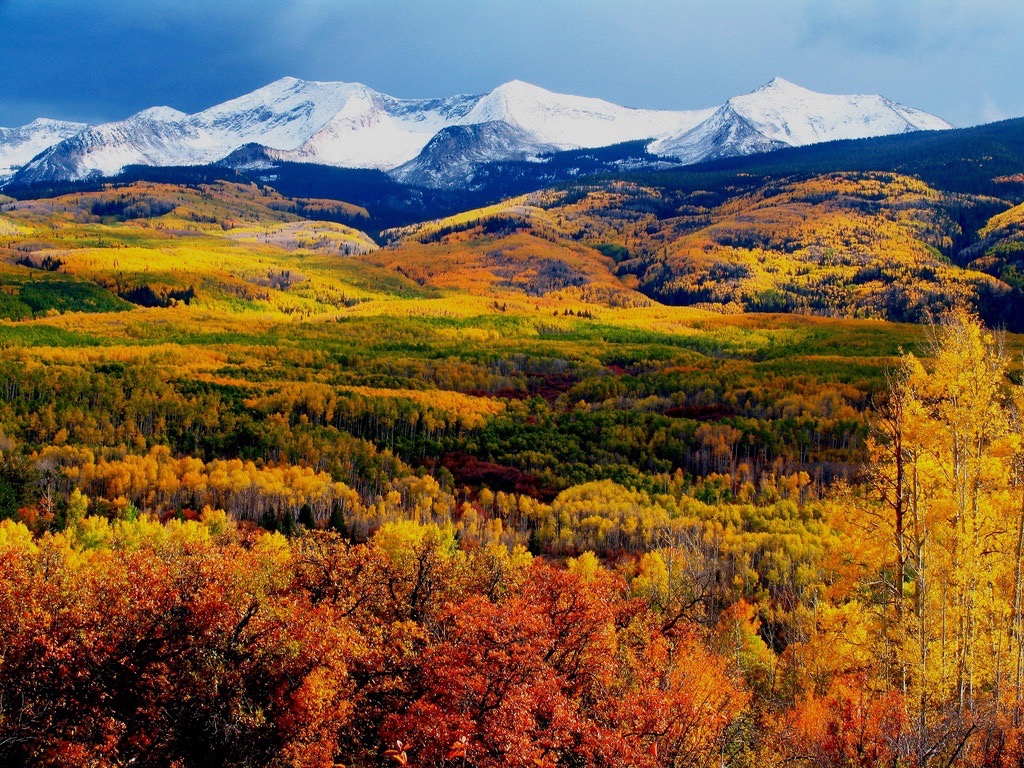 The economists at Indeed’s Hiring Lab say that the areas of the country that voted for Donald Trump in 2016 face the smallest job growth in the decade ahead.

Indeed uses new projections by the US Bureau of Labor Statistics (BLS) to project the winners and losers in the American job market for the period 2016-2026:

The occupational projections suggest faster growth in urban areas than in suburbs, and slowest in rural areas. The two sectors projected to have no or negative growth — production and agriculture — are more concentrated in small towns and rural areas. Many technical, scientific, legal, financial, and healthcare jobs are clustered in big, dense cities.

Indeed combined the BLS projections with 2016 US Census Bureau’s American Community Survey data to show where the faster-growing occupations will be located. That suggests faster growth will be in coastal urban areas, and slowest growth will be in rural areas:

Indeed then overlaid voting patterns on the BLS job growth projections. It is clear that Blue America has a more favorable forecast for future jobs growth than Red America:

The next decade’s jobs growth could also increase inequality. The fastest growing jobs include several with the highest average wages, including healthcare, computer, and mathematics occupations. Occupations with the lowest average wages are also projected to grow fast, such as home health aides and personal care aides. Middle-wage job growth is projected to lag, at about half the rate of the highest- and lowest-wage jobs.

It seems that a big slice of Trump’s supporters will be losers when it comes to jobs and income growth over the next 10 years. Will they stick with the Republican Party when the job situation gets even worse for them? Of course!

This week we watched Jeff (I’m not a) Flake give a valedictory speech that excoriated the leader of his party. Catalonia succeeded from Spain, and the GOP pushed their tax cut agenda forward. The Trump administration tried to deny a young illegal immigrant woman an abortion, and Hillary Clinton was implicated in paying for the Steele Dossier.

But the worst was that Paul Newman’s Rolex wristwatch sold for $17.75 million. File this under: Idiots with too much money.

Plenty of hits to the system for a single week, so it’s time to take a break from the reality known as Trumpmerica.

Time to brew a very large mug of Celestial Seasons Bengal Spice tea, put your feet up, and put on the Bluetooth headphones. Now listen to Aaron Copland’s “Quiet City” from the 1989 album “Works by Husa, Copland, Vaughan Williams, and Hindemith”, performed by Wynton Marsalis with Phillip Koch on English Horn along with the Eastern Wind Ensemble.

Copland said the piece was an attempt to mirror the troubled main character of an Irwin Shaw play, who had abandoned his religion and his poetry in order to pursue material success. He Anglicized his name, married a rich socialite, and became president of a department store. But he continually returns to his guilty conscience whenever he hears the haunting sound of his brother’s trumpet.

See if Marsalis can take you inside your conscience: