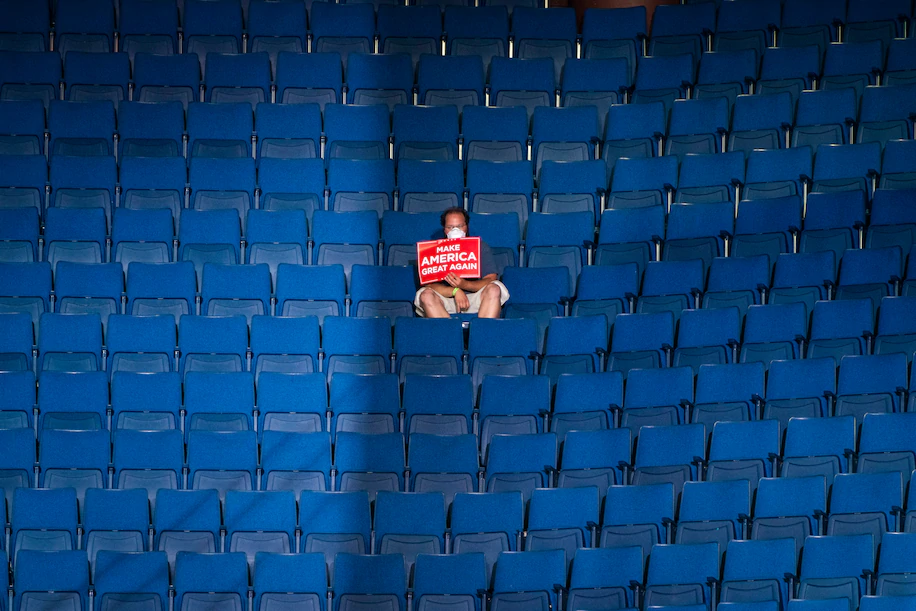 (Blogging for the rest of the week will be light and variable, as Wrongo and Ms. Right embark on our first trip since COVID entered our lives)

Wrongo’s initial reaction to the smaller-than-expected crowd in Tulsa on Saturday was that quite a few Trump supporters actually had common sense, despite what they might have said to the press about COVID.

CNN said the venue estimated that 6,200 people were in the arena. The blue section where the lone Trump supporter above is seated, is the highest level of the arena. It holds 9,000, and was largely vacant. Despite that, the Trump campaign said that 12,000 went through the metal detectors.

Wrongo was wrong about the Trumpets. It turned out that teenage users of TikTok were behind the early huge crowd estimates by the campaign:

“TikTok users and fans of Korean pop music groups claimed to have registered potentially hundreds of thousands of tickets for Mr. Trump’s campaign rally as a prank.”

And the NYT reports there’s a story behind the story:

“Mary Jo Laupp, a 51-year-old from Fort Dodge, Iowa, said she had been watching black TikTok users express their frustration about Mr. Trump hosting his rally on Juneteenth. (The rally was later moved to June 20.) She “vented” her own anger in a late-night TikTok video on June 11 — and provided a call to action. ‘I recommend all of those of us that want to see this 19,000-seat auditorium barely filled or completely empty go reserve tickets now, and leave him standing there alone on the stage’….When she checked her phone the next morning…the video was starting to go viral. It has more than 700,000 likes, she added, and more than two million views.”

This will be spun many ways over the next few days, but a few days ago, the campaign claimed the equivalent of a quarter of Oklahoma’s population had requested a ticket. Today, they blamed invisible Antifa’s for both the cancellation of the planned overflow outdoor speech, and that the indoor venue was not even half full.

This shows how far the Trump campaign has to go in the next 132 days.

Today’s real topic is AG Barr’s firing of the US Attorney for the Southern District of New York (SDNY), Geoffrey Berman. First, Berman was asked to resign, and he refused to comply. Then Barr said that Trump had fired Berman, so Berman then agreed to leave.

The SDNY has pursued a series of highly visible cases that are Trump-adjacent. It handled the arrest and prosecution in 2018 of Michael D. Cohen. Then there was the indictment last year of a state-owned bank in Turkey. Turkish president Erdogan wanted Trump to quash the investigation. Bolton’s book says Trump promised Erdogan that he would get rid of the current leadership of SDNY, and then they’d “take care of it.”

Berman also has an inquiry into Rudy Giuliani and his henchmen, Lev Parnas and Igor Fruman.

Berman’s dismissal seems to be either questionable judgment, or an effort to obstruct ongoing investigations. We’re way past the point of optics. Trump and Barr are in a scramble to do ANYTHING to get re-elected. Their hope is to keep the conspiracy going for four more years.

And their latest effort, to short-circuit the ongoing criminal investigations of Trump’s affiliates and associates, is only the most recent evidence. If Barr continues down this road, he will make John Mitchell, Nixon’s disgraced attorney general, who did time for his transgressions, look like a man of principle.

When Barr was up for Senate confirmation, he was the old Washington hand everyone respected and who, we were assured, had nothing but respect for the law. Now it’s clear that he’s someone who had a pedigree and the right connections, but no moral center.

Trump plans to replace Berman with the head of the SEC, Jay Clayton. Clayton is a lawyer who doesn’t have any criminal experience. His former client, Deustche Bank, is party to a Trump tax return case that is before the Supreme Court.

Time to Wake up America! None of Trump’s people have a moral center. We have a few weeks remaining to register and turn out voters in such overwhelming numbers that these bastards are thrown out of office.

To help you wake up, consider this quote from John Adams:

“Our Constitution was made only for a moral and religious People. It is wholly inadequate to the government of any other.”

And right now, we have a government without ethics or morals.