Why is it that so many pundits feel the need to tweet/talk/bloviate in a way that sounds like they’re proven right when there is a new case of Ebola? Why did Bill O’Reilly feel the need to say that he knows better than the head of the Centers for Disease Control and Prevention about how to keep Americans safe from the Ebola virus? The greatest cost of our rampant corporatism may be the continued chipping away at our trust in public institutions.

Even though spreading panic is great politics, if we need to reevaluate our protocols for healthcare workers caring for patients with Ebola, fine, but if you live in another state from the person infected in Dallas, you’re gonna be ok.

Let’s remember that Thomas Duncan, the sole Ebola fatality in the US, spent 3 days at home with a fever of 103. He was infectious for the 3 days he was at home with the illness, and he could have infected someone else in the household, but he did not. Apparently, his family took great care not to be exposed, and they seem to be on the verge of succeeding, since the incubation period is up to 21 days. Duncan showed symptoms on Sept. 24th. If we count from then, the family still have a day or two before they are out of the woods. If we count from Sept. 28th, when he was vomiting and went to the hospital for the 2nd time, they would be safe on Saturday.

That said, this report in Scientific American by Judy Stone, MD and infectious disease specialist, speaks to the problems with both process and culture in hospitals:

One hospital I am familiar with has Powered Air Purifying respirators (PAPRs), purchased with bioterrorism preparedness grants, but neither stethoscopes nor other dedicated equipment for isolation rooms. So nurses and docs gown up to go in the room of a patient with a “superbug” but take their stethoscopes into the room and then on to other patients, perhaps remembering to wipe it down first.

This New York Times blog post & graphic on the procedures for healthcare workers caring for people with Ebola echoes Dr. Stone’s discussion and shows how hard it is to be careful.

Here is a chart by Dr. Stone on of our expense for Public Health Preparedness spending since 2001: 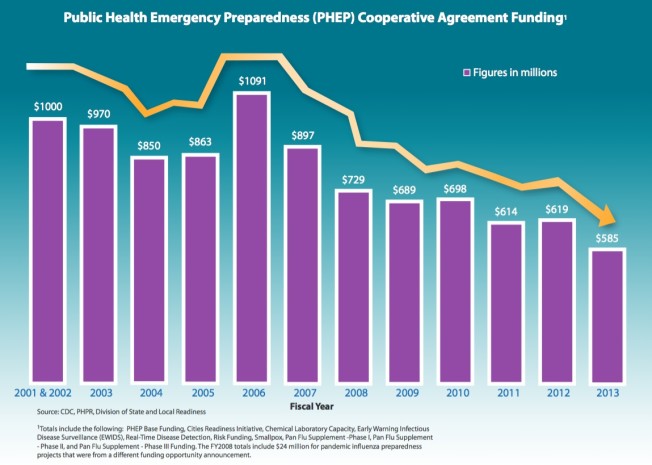 This shows that funding for preparedness efforts have fallen by a cumulative total of $2.4 billion since the high point in 2006. The chart shows that the deepest cuts came in GW Bush’s second term. Since then, substantially more has been cut from the programs. Starve a program designed to educate and isolate a deadly outbreak among public health professionals and then blame the government when something goes wrong. Thanks Mr. O’Reilly.

Politics, as usual, is the fly in our soup. Unfortunately, next month Americans again go to the polls and at least half of them will vote for the very people who are doing everything in their power to eliminate public health care.

Isn’t it strange that public health policy is being decided based on economic beliefs about free trade and travel rather than mathematics and science? We in the West offered no assistance to immediately help control the initial Ebola outbreak in Africa. We said, let it burn itself out, like it has done before.

But, the New York Times reports that the new head of the World Bank, Dr. Jim Yong Kim, was among the first to see the need to move quickly against the Ebola threat. He committed $400 million to fight Ebola, and $105 million has already been disbursed. In September, he said to Dr. Margaret Chan, the head of the World Health Organization:

You have the authority to act in this emergency…so why aren’t you doing it?

Now, in October, she seems to be finally on the case.

Here at home, Republicans are vying with each other to shame the Obama administration into implementing a travel ban against Ebola-affected countries. That wouldn’t be an unreasonable suggestion if it could stop the spread of the disease. But it won’t. Here’s why:
• There is a de facto private ban already in place, since US-based airlines stopped flying to Ebola-afflicted countries two months ago (to protect their crew and passengers from exposure — and themselves from lawsuits).
• Delta and United offer direct, nonstop service between the US and West Africa—Delta to Lagos, Accra, and Dakar, and United only to Lagos.
• No travel ban or quarantine will seal a country completely. Models predict that even if travel could be reduced by 80%, new transmissions would be delayed only by a few weeks.

And health-care workers who become ill would not be able to get out for treatment, and the international health personnel needed to quell the outbreak would no longer be able to get in.

Despite the fear-mongering, we know what needs to be done. We have organized the deployment of 3,000 troops and have begun marshaling a wider international response that is tragically slow. With the announcement of the Dallas case, hospitals across the country are now scrambling to get their procedures up to snuff.

We need to have the boots in Africa to help manage the probable local panic as well. It is a linear investment by the US that could have an exponential payback.