A number of red states have passed statutes forbidding the implementation of Islam-based sharia law in their states, but Republicans apparently have no misgivings about turning the US into a Christian theocracy. The poll’s cross-tabs reveal that support for making Christianity the official religion is strongest among supporters of Mike Huckabee (94%), Rick Perry (83%), and Ben Carson (78%).

Now the poll was small, only sampling 316 Republican primary voters. Sample sizes of 300-600 are the norm for national telephone pollsters. While 316 is on the low end of that, PPP says that its margin of error is ± 5.5%, so some will say that it can’t scale up. However, PPP has been very accurate in the past.

The same poll also found that 66% do not believe in global warming, and a plurality (49%), do not believe in evolution. So, not only do they wish to establish a national religion, but it appears that their version of Christianity is one that is at odds with the scientific consensus in climatology and biology.

These data were buried deep (starting on page 14 of 47) in a report about how Scott Walker leads in the national eye test competition among Repubs.

Here’s a repeat of yesterday’s reminder: The First Amendment to the US Constitution provides that “Congress shall make no law respecting an establishment of religion”. There’s a reason that our Founding Fathers wanted to establish a strict separation of Church and State, and the poll results bear out that wisdom. If things were left up to today’s Republican primary voters, we’d already be a theocracy, perhaps as self-righteous and intolerant as Iran or Saudi Arabia.

The ignorance of our Constitution displayed by the poll results speaks to a voting populace that simply doesn’t care about tolerance, multicultural diversity, and most certainly, not about religious freedom. 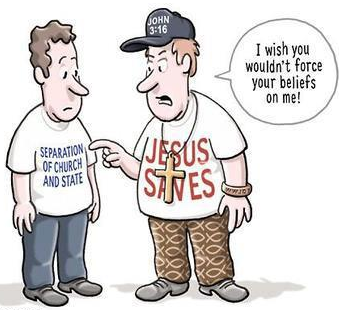 America ought to be better than this. Instead, a significant portion of the electorate would be perfectly happy to turn this into a Christian theocracy…a recipe for tyranny by these good, God-fearing Christian patriots.

Our Founding Fathers lived at the end of a 300-year period where Europe had been racked by wars of religion, fought between adherents of various “Christian” sects, and they were only a little over a hundred years removed from the English civil wars of the mid-1600’s which were strongly influenced by religion. The colonies themselves mirrored Europe’s religious division, Anglicans in Virginia, Puritans in New England, Quakers in Pennsylvania, Catholics in Maryland, and many German religious refugees in New York and Pennsylvania. They had darned good reasons to not want any religion to be given preeminence.

And today, we see religious violence in Asia (Burma, India, and China) and in the Middle East. Why would we want to revisit that here, in a nation that knows better?

From fear of Jihadi John, to fear of immunizations, to denial of climate change, it doesn’t seem that Conservative American Christians are comfortable with the idea of critical thinking; it seems to require too much of them. How would atheists, or non-Christians of all stripes survive under the US Christian state? Luckily, that would take a Constitutional Amendment, which could prove very difficult to enact.

How did Conservatives, noted in the not-so-distant past for a fierce commitment to logic, become such prisoners of their various religions?

Of note, conservative now seem to care only about the 2nd amendment. Not the 1st, 4th or any of the rest.

Regarding the Wrongologists piece on our current batch of republician leaders and their propensity for denying science and embracing religious distortion and misinterpretation of myth, no example can make the point better than Senator Inhofe from OK who recently turned up on the floor of the senate with a snow ball in hand as PROOF that climate change was a hoax perpetrated by alarmist scientists. To further punctuate his point, he, reportedly, quoted from the Old Testament about the “spring and harvest, the warm and cool always being with us”. What a relief. Now we can all stop talking about this and ignore what we sense is true. Thank you, Senator, for this pastoral reminder. Having you as chairman of the Environmental and Public Works Committee, which has juristiction over matters related to climate, offers the kind of reassurance from our national leaders that we’ve come to count on in these uncertain times.