The Guardian highlights a report by the International Monetary Fund (IMF) about the level of global subsidies paid by governments to the fossil fuel industry:

Fossil fuel companies are benefiting from global subsidies of $5.3tn (£3.4tn) a year, equivalent to $10m a minute every day, according to a startling new estimate by the International Monetary Fund.

That’s $5.3 trillion per year. The subsidy estimated for 2015 is greater than the total annual health spending of all the world’s governments. The subsidy is created by polluters not paying the many costs imposed on countries by the burning of coal, oil and gas. These include the harm caused by air pollution.

The IMF said that ending subsidies for fossil fuels would cut global carbon emissions by 20%. They argue that ending the subsidies would also slash the number of premature deaths from outdoor air pollution by 50%, or about 1.6 million lives a year.

It is difficult to get behind the IMF headline to the methodology that leads to their findings. They are basically estimating how much damage global warming is doing and listing that as a government subsidy. The benefits that fossil fuels have delivered to mankind are massive. The pro-fossil fuel argument is that if you could put a price on these things, it would outweigh the $5.3 trillion figure by many thousands of times.

That is true, but the argument misses the point. We need fossil fuels. We use fossil fuels. The issue is why are the costs socialized, while the profits are privatized?

This again highlights the moral and intellectual bankruptcy of the “Maximize Shareholder Value” movement in corporate governance. The 1970-era Clean Air and Water Acts and the 1980-era Superfund, TSCA, and RCRA Acts were among the first attempts to shift the costs of the socialized pollution costs back onto the corporate and municipality originators. Ironically, given today’s political environment, all of the major environmental acts (except the 1980 Superfund) were signed into law by Republican presidents Nixon and Reagan.

In the IMF report, China provided $2.3 trillion of the subsidies. The US was 2nd with $700 billion.

China will be focusing on reducing their pollution and other impacts as their society gets wealthier. Once people’s basic needs are met, they will be looking to improve their lot, and breathing in poisonous smog and living next to putrid water will not be high on their list of desires. As an example, it only took 25 years after the end of WW II for Americans to insist on an improved environment.

And all of the above ignores the costs of wars to keep the fossil fuel supply lines open, as well as the regular costs of our defense and intelligence establishments, and the destruction of democracy as necessary collateral damage.

All that for something we burn. Along with our tax dollars, that is.

Cartoon of the Day: The real truth about DC’s Think Tanks: 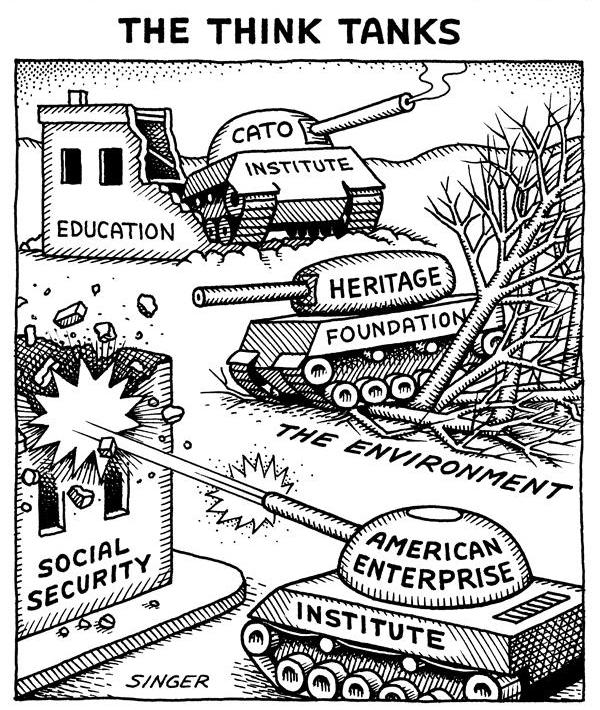 Is Japan becoming extinct? The Japan Times wonders what the projected drop in the country’s population says about its future. They cite a report, “Local Extinctions”, which says that that 896 cities, towns and villages throughout Japan are facing extinction by 2040. Factoid: In 2013, 8.2 million of the more than 60 million homes nationwide were empty, and 40% percent of the 8.2 million empty homes were not being offered for sale or rent.

Here’s how much of your life the United States has been at war. The link shows a ginormous chart of how many years of your life were in wartime. For the Wrongologist, it is 43.8% of his life.

Millions of tiny spiders rained from the sky in Australia. Residents of Goulburn, Australia woke one day this month to find their town shrouded in silken webs, while millions of tiny spiders rained down from above. Apparently this is called “Spider rain.” It happens when large groups of arachnids migrate all at once, using a technique called “ballooning.” Creepy much?

After decades of maintaining a minimal nuclear force, China is re-engineering its long-range ballistic missiles to carry multiple warheads, or MIRVs. China has had the technology for decades, but the decision to put three or more warheads atop a single missile is recent. So far, China has declined to engage in talks with the US about their decision to deploy MIRVs. If America treats China like an enemy, then China WILL BE our enemy. Maybe that’s what the Pentagon and CIA want. They need something to justify their big budgets, and their secret slush funds.

See you on Sunday.