With 99.9+% percent of the vote counted, Erdogan’s Justice and Development Party (AKP) garnered the support of 41% of voters. That would give it some 258 seats – 18 below the minimum needed to keep its majority. In 2011, the AK Party received 49% of the vote, 8 points higher than in 2015. This is the first time the AKP fell short of a majority since it came into power in 2002.

The election was widely perceived as a referendum on Erdogan’s plan to change the Turkish constitution in order to grant himself sweeping, unprecedented presidential powers. Because Erdogan’s record shows tendencies toward authoritarianism, many observers in Turkey and outside believed that his proposed constitutional amendments would not just change the structure of Turkish democracy, but pose an existential threat to it.

Erdogan began the campaign asking voters for 400 seats, which would have allowed the party to change the role of the presidency unilaterally. The AK Party needed 330 seats of the total 550 to call for a national referendum to change the constitution, but they stalled at 258, so that will lead to a coalition government, and no immediate ability to change the Turkish constitution.

The Kurdish HDP, now the first Kurdish party ever to be seated in Turkey’s parliament, won 80 seats. Most westerners like the Kurds, for their resistance around Mosul in Iraq and around Kobani in Syria. They also support women’s rights and gay rights. Kurds are the Muslims who are closest to western values. From BBC: Who are the HDP?

• The HDP was founded as a pro-Kurdish party in 2012
• There are 15million Kurds in Turkey, 20% of the population
• It had the only openly gay candidate in Turkey’s elections
• A higher proportion of women ran for the HDP than any other party

Here is an election results map from the Daily Hurriyet: 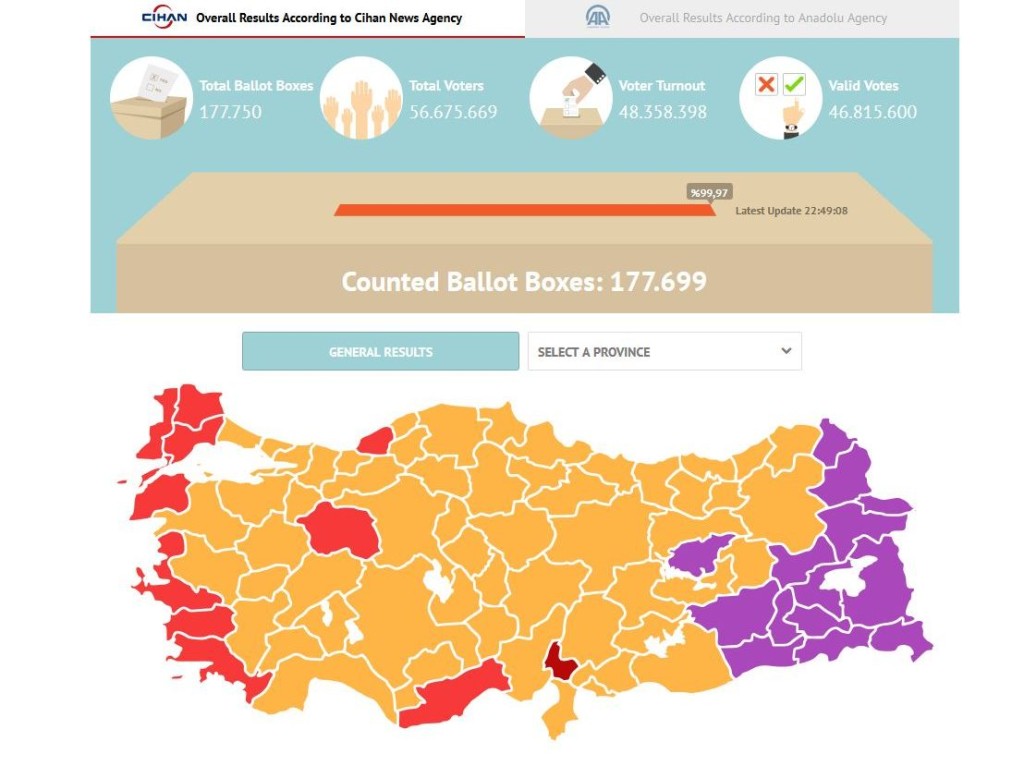 Voter turnout was 85%. The map shows the AKP in orange, the CHP party in red and the HDP in purple. It is clear that the HDP made its gains in southeast Turkey, the area most at risk in the ISIS and Syrian uprisings. HDP leader Selahattin Demirtas called his party’s showing:

A fabulous victory for peace and freedoms…As of now the discussions on a presidential system, a dictatorship, has come to an end

The Daily Star reported on the dilemma Erdogan faces. Under the current constitution, the president position (that Erdogan now holds) has limited powers. He campaigned to change the constitution, but the election’s result could leave Erdogan stranded in the presidency without the powers he sought. Bottom line: While Erdogan’s plan for Islamic presidentialism has been defeated, the AKP is still in control of Turkish politics — and likely will remain that way for a long time.

The reasons for the loss seem mostly driven by the Turkish economy and Erdogan’s policies on Syria. For the past decade or so, the AKP has ridden high on a dynamic record of promoting economic growth. But recently, the economy has been slowing down. The Turkish lira has lost considerable value, the economy has not grown anywhere near the rate that it had in the past, and there are worries about an economic collapse. And many were afraid of Erdogan’s plan for deepening Turkish involvement in Syria, Iraq and the greater Middle East.

Today, Erdogan is a wounded politician, and the AKP is weakened. This will lead to infighting within the AKP and maybe even a split of the party into several factions. In all this result will likely leave less capacity in Turkey for adventures in Syria and Egypt, or with ISIS and the AL-Qaeda affiliated Al-Nusra front.

As the Guardian said:

None of the four parties in the new parliament are able to form a single-party government, meaning Turkey is entering a period of volatility. Erdogan approaches politics as a binary contest between winners and losers in which the decisive aim is to secure a majority. On Sunday he lost…

The country had been sliding into an Islamic autocracy under the guise of democracy, but the Turkish electorate have called a halt to that.