Off Topic: Here is your last Santa photo of the season. Santa dodges tear gas in Bethlehem, 2015: 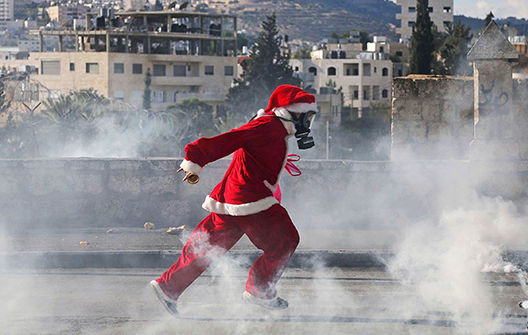 Everyone is following the story of the standoff in Oregon’s Malheur National Wildlife Refuge, waiting for the next ugly shoe to drop: Will the authorities shut down the Ammon Bundy crew? Will bullets fly? Will they wait them out? As Josh Marshall said: (emphasis by the Wrongologist)

…we just confirmed from Oregon State police the Ammon Bundy and his crew, who appear to be running low on supplies (Fritos, beef jerky, pizza, etc.) are actually free to come and go as they please. So if they need more food they can just leave the standoff, drive off to the nearest grocery store on a food run and come back and keep up the historic siege.

We look at the ridiculously inconsistent way law enforcement handles white right-wing freaks as opposed to other people who break the law or threaten violence…the import should not be that federal law enforcement should just rush in and kill everyone. Using force should be a last resort. And, within reason, if you can just wait people out and then charge them with whatever crimes they committed, great.

Seems like some liberals are willing to work really hard not to create an incident with the Bundy crew, or as Tengrain calls them, Y’all Qaeda. Here’s Booman, commenting on Marshall:

The double standard in how these white men are treated and how, say, Tamir Rice was treated couldn’t be more glaring. However, delivering Ruby Ridge Part Deux just to be consistent is maybe the dumbest idea ever written down by a liberal. The easiest way to end a siege is simply to refuse to besiege them.

Wrongo gets that the Feds and the local authorities don’t want another Waco or Ruby Ridge, but if we had nipped the Bundy problem in the bud when it arose in Nevada, this subsequent event might not have happened.

The Malheur was poorly managed before and after the government took over. Nancy Langston, professor of environmental history at Michigan Technological University wrote about Malheur in the NYT:

By the 1930s, after four decades of overgrazing, irrigation withdrawals, grain agriculture, dredging and channelization, followed by several years of drought, Malheur had become a dust bowl.

The Bundys and fellow travelers refuse to accept that We, the People, already own and run the land. That we determine how to use it. The protesters might not like this, but even if it went back into private hands, it would be a matter of little time before overgrazing brings back dust bowl conditions to the area, and these free marketers ask for federal disaster assistance.

The common thread is the continuing story of corporate welfare in the American West: under-market grazing fees, under-market water rights, under-priced mineral rights, crop subsidies, ad nauseam. And the cry is always the same: “the government is ruining our way of life” (by interrupting the flow of subsidies). The question is whether this “way of life” is sustainable if it’s not supported by the American taxpayer.

Back to the occupation of the Wildlife Refuge:

• We can ignore them until they get bored and go home, but what if they don’t go home?
• OTOH, we can say it’s an armed standoff with the federal government. The very opposite of legitimate protest.

We need to remember that this has its genesis with Cliven Bundy in Utah. There, the Feds backed down to avoid an armed incident, and Cliven Bundy still has not paid his grazing fees. It’s as if threatened violence caused the US government back down. We acted moderately, and now 21 months later, another Bundy is edging up to another armed standoff about other federal land in Oregon.

Let’s ask the Y’all Qaeda to leave, letting them know the legal penalties for staying.

They should tell the media exactly what’s happening. Let every cable and network television channel go live as the federal officers go in, armed only with handcuffs.

Don’t shoot our way in, making them martyrs or giving them a defense of armed self-protection.

If the situation gets adversarial, then of course arrest them, by any means necessary.

See you on Sunday.