(Wrongo will be on the road until 2/27. This is the last post until we resume with Sunday Cartoons on 2/28)

Now that Donald Trump has swept Nevada, it’s time to acknowledge that he is the likely GOP nominee, and Republicans are lining up to accept him into the fold. In fact, the GOP House Majority Leader, Kevin McCarthy said this week that he could work with the Donald, while a few Congress people have now endorsed him.

Mr. Trump is running as a fixer of America’s problems based upon his business success. But is success in business indicative of presidential performance?

Maybe not, although in 2012, Mitt Romney said the Constitution should be amended to say a president must have business experience:

A 2009 survey of historians by C-Span showed that 6 of our 10 best presidents lacked sufficient business experience to be president by Romney’s yardstick. That includes Ronald Reagan, the actor, corporate spokesman and politician, and John F. Kennedy, the naval officer, writer and politician. There is one failed businessman on the list of great presidents, the haberdasher Harry S. Truman.

And Teddy Roosevelt, Eisenhower and FDR would not have been president, since none had real business experience.

By contrast, two 20th century businessmen-presidents, George W. Bush, who got rich owning the Texas Rangers, and Herbert Hoover, who found his fortune in mining, were ranked among the worst presidents ever by the same C-Span historians. And both had Harvard MBA’s.

Trump’s business experience and its success are more relevant if you are thinking about voting for him, than say, one of the other candidates, because it is his ONLY qualification. He has no political experience, he has no clear policies, and the vague ideas that he does throw out suggest that he has not taken the time to learn much about the big issues of the day.

His message is basically: “Don’t worry about the details, you can trust me because I’m super successful and I have a huge company.”

Let’s look at how successful Trump has been in business. According to The Economist, a review of Mr. Trump’s career suggests three conclusions. First, his fortune is about $4 billion. Second, about 93% of his wealth is located in America, and 80% is in real estate. Third, Mr. Trump’s performance has been mediocre compared with growth in the value of the stock market and in the growth of New York property values. More from The Economist: (brackets by the Wrongologist)

Of his wealth, only an estimated 7% is outside America and 66% is…in New York [City]. Only about 22% of his worth is derived from assets that he actively created after 2004, when he became a reality TV star. Some 64% is from conventional property and a further 17% from resorts and golf clubs. His biggest recent deal [was] in real estate: buying the Doral hotel in 2012 out of bankruptcy. 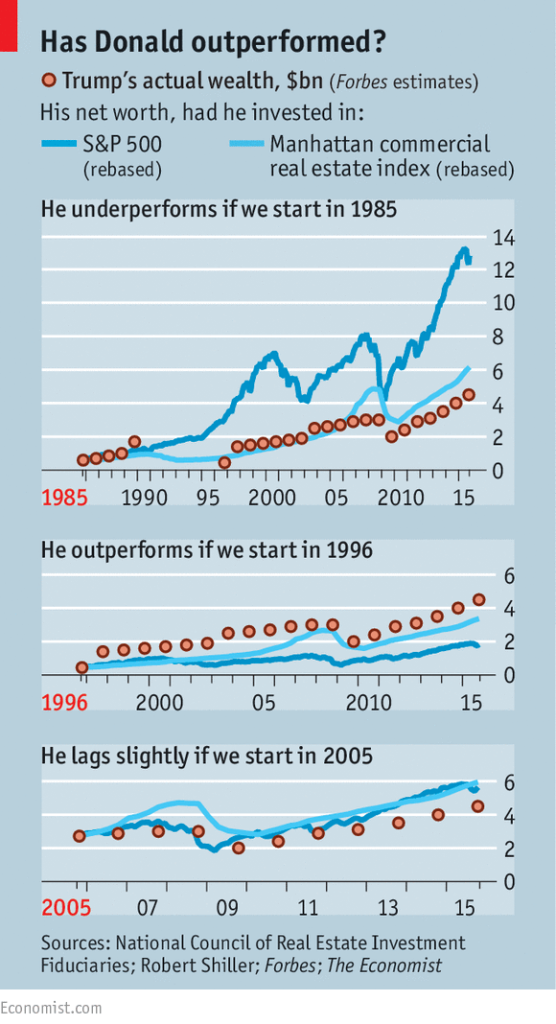 Trump will be 70 in June. Much of his wealth was made well over a decade ago from a few buildings in Manhattan, including Trump Tower. The Economist thinks that Trump’s success happened a long time ago, that he has limited experience with complex organizations, little foreign experience, and limited policy experience. He has spent most of his life managing what is essentially a family business, one that he inherited from his father.

Republican primary voters say: “so what?”

If you are going to vote for The Donald, and he does get elected, go visit Trump Tower in NYC, and celebrate with one of the $18 “You’re Fired” Bloody Marys.