(The next column will appear on Monday 3/14. Starting tomorrow, the Wrongologist and Ms. Oh So Right are attending a wedding in Vermont)

Our preoccupation with the primaries, and dick-measuring has obscured several things that are happening around the world. Let’s take a quick look at three things we have talked about in the past.

US Russia/Middle East policy. Sec. Def. Ash Carter, Chairman of the Joint Chiefs of Staff, Gen. Joseph Dunford, and the wacky NATO Commander, Gen. Phillip Breedlove, all seem to be intent precipitating a war with Russia. Last week at a Congressional hearing, Breedlove called Russia “America’s greatest strategic threat.” He went on to accuse Vladimir Putin of “Weaponizing” the flood of ME refugees into Europe as a plan “to overwhelm European structures and break European resolve.”

We have our disagreements with Russia, we certainly hate what they did in Crimea and what they are doing in Ukraine. The jury is out on whether they are saving or frying our bacon in Syria, but it seems that we are (almost) on the same page there, except for our insistence that Assad must go.

It pays to remember that Russia is armed with several thousand nuclear weapons. Is it really wise for the head of NATO to pick a fight with a country that he knows feels deeply threatened by NATO expansion?

Our policy with Israel. Netanyahu has once again shown his contempt for Obama by spurning an invitation to meet in the Oval Office. When the Iran deal went down over Israel’s strong disagreement, the US agreed to send Israel more equipment and money to shore up their defenses against Iran. But, Netanyahu wants even more money and equipment than Obama is willing to give him, and he thinks that he will get a better “deal” from the next US president. Tom Friedman observed on PBS that Obama has quietly given up on the two-state solution, that it is up to Israel to implement a “one-state” solution: (brackets and emphasis by the Wrongologist)

The idea that they need John Kerry…to come over…It’s got to start with them. I think the most constructive thing President Obama could do [is]…say, we tried. It’s over. There’s going to be a one-state solution.

Friedman says all the Israelis do is pick apart new peace plans, making it more about the US, not about the warring factions in Israel: (brackets by the Wrongologist)

The Americans [should say]…nobody’s coming. It’s over. It’s yours. You own it. Now you live with it.

And fix it if you can. But can we expect that from ANY of the current presidential candidates? No, they all say that they are Bibi’s greatest supporters. So we can expect the policy of “whatever Bibi wants, Bibi gets” to continue.

Finally, Turkey: Turkey is a member of NATO. Turkey wants to become a member of the EU. But, President Tayyip Erdogan is moving quickly to make Turkey an illiberal democracy. Turkish elections are democratic and mostly fair, but the government that they elect imprisons journalists, reassigns police in the middle of inconvenient investigations, and most recently, closed the country’s largest newspaper. In fact, 2000 people have been arrested just for insulting President Erdogan.

The EU is considering accelerating Turkey’s negotiations for EU membership. That process, which has been stalled for years, normally requires a candidate country to meet basic standards on pesky items from the independence of its judiciary, to press freedoms, two things missing in today’s Turkey.

The EU is crafting a devil’s bargain. They want Turkey to open up new refugee resettlement camps to hold the Syrians who cross from Turkey to Greece, and on to the rest of Europe. But shopping in the Turkish bazaar is never wise for the novice. The EU learned that lesson this week, when it discovered the refugee deal it believed it had previously sold to Turkish leaders turned out to be just the beginning of the negotiation on Monday. Turkey’s counter offer would have prompted EU negotiators to get up and walk out six months ago. Ankara’s proposal:

• €3 billion in refugee aid in addition to the €3 billion already pledged.
• Liberalized visas for Turkish citizens to visit the EU.
• A pledge by the EU to resettle the same number of Syrian refugees already in Turkish refugee camps, as Turkey takes in when the EU sends them back.
• Accelerated consideration of Turkish EU membership.

Turkey’s message to Europe is: You need us more than we need you. Their message back should be: we’ll give you the money. That’s it.

In closing, Wrongo just can’t resist a brief return (excuse the pun on briefs) to the US general election. Hillary’s likely reaction to Trump’s exhibitionism: “Somewhat like a penis, only MUCH smaller”. 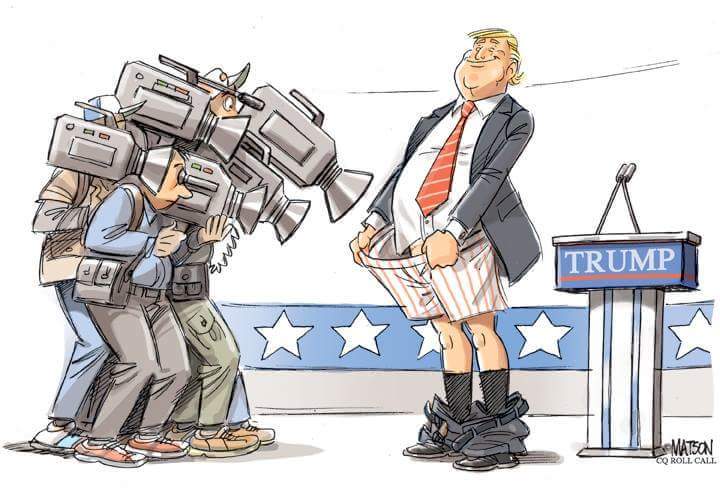